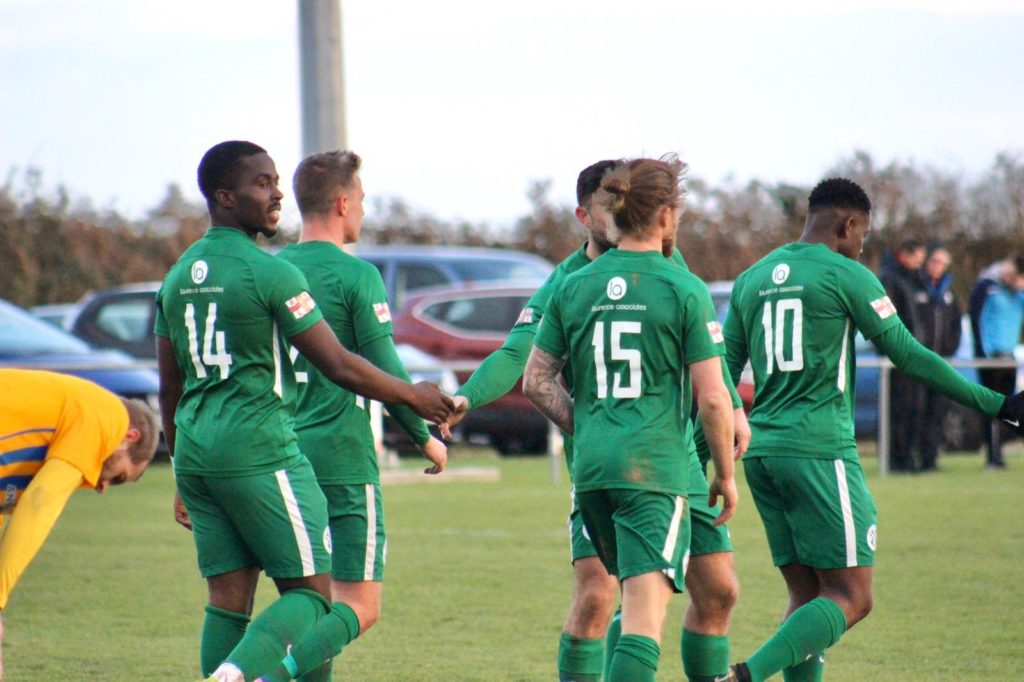 The wet and windy conditions failed to stop Mousehole comfortably progressing to the fourth round of Cornwall’s premier cup competition at the expense of the West Division’s bottom-placed club.

The Seagulls have now won their last three away games scoring 20 goals in the process without conceding a goal.

Home goalkeeper Anton Lake had already made three good saves from Lez Cela twice and Rheiss McClean, before Scott Imade latched on to a loose ball to send his marker the wrong way and score high into the net from 10 yards in the 38th minute.

Sticker’s only real scoring threat for the whole match came shortly afterwards when keeper Corey Harvey was beaten to a through ball by Derrick Lucas but Mark Richards read the danger well to clear the winger’s lob in front of goal.

At the other end an excellent left wing cross by Jamie Devine was met with a firm header by Mousehole’s new signing Tallan Mitchell from six yards only for Lake to make a reflex save.

But in the next attack Rheiss McClean’s trickery won him space on the right and his cross was touched in by Kieran Toland at the far post for a 2-0 interval lead.

With the strong wind in their favour, Sticker might have expected to get back in the game early in the second half, but it was Mousehole who took control with quick precise passing, and the third goal arrived in the 50th minute.  Scott Imade stole the ball 25 yards out and created the space for Kieran Toland to drive low into the far corner from inside the box for his 24th goal in 19 league and cup games so far this season.

Scott Imade then grabbed his second goal and Mousehole’s fourth on 63 minutes, chesting  down substitute Amara Bakayoko’s cross from the right and sliding the ball home from 10 yards.

It was 5-0 in the 75th minute as Bakayoko got on the scoresheet with a characteristic fierce drive after being released by a well-timed pass by Tallan Mitchell.

Lez Cela completed the scoring inside added-on time with a swerving 25-yard left-sided free kick inside the near post.

Mousehole are still in all three Cup competitions and will be looking to reach the fourth round of the League Cup on Saturday (16th, kick off 2.30pm) at Premier East club Brixham, who coincidentally won 5-1 at Sticker in the last round.  Brixham currently lie in 5th place with 9 wins and 4 defeats, but made the headlines on Saturday with a 4-3 league win at previously undefeated Ilfracombe.

The Seagulls then return to Trungle Parc for a welcome three games in a row, starting with a floodlit league fixture against Wendron United on Friday 22nd November at 7.30pm.

The month ends with the visit of another top team, Bodmin Town, for a league match on Saturday 30th at 3pm.

In the Cornwall Senior Cup, fourth round ties are scheduled for Saturday 4th January 2020.

*Mousehole’s three Senior teams achieved a clean sweep of wins at the weekend, with the Reserves defeating Redruth United 3-1 in the St Piran League, and table-topping Mousehole Women victorious by 4-3 against second place Illogan in the Cornwall Women’s Football League