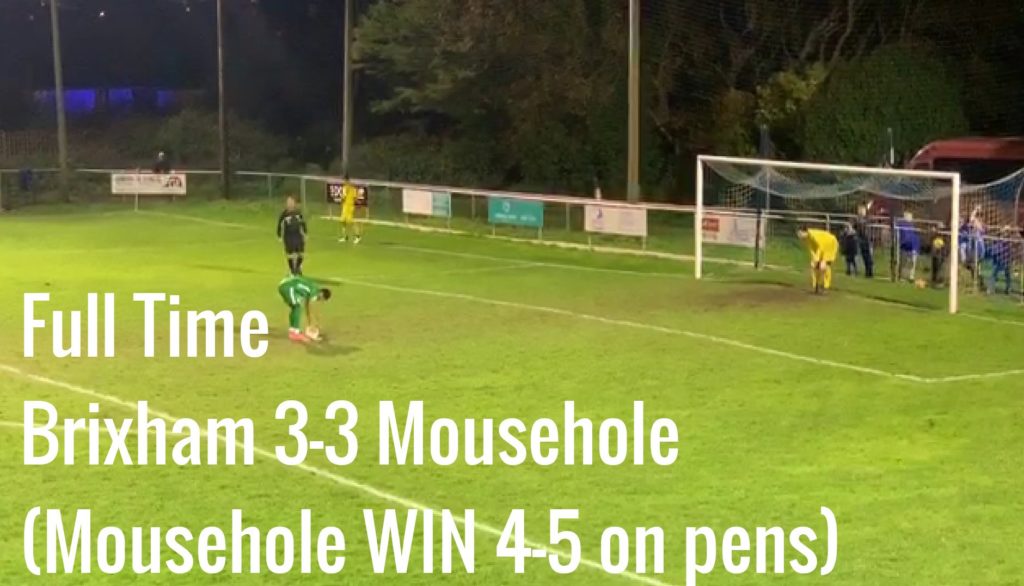 Mousehole made their longest journey of the season to the south coast of Devon, and after nearly three hours of a vigorous see-saw contest against their East Division opponents, they finally but deservedly won through to the quarter-finals of the League Cup.

The match between two sides with completely contrasting styles had most things to keep the spectators on their toes.

Brixham scored an unexpected early goal, then missed a penalty.  Mousehole grabbed a very late equaliser to force the game into extra time, and soon took the lead.  The  hosts then scored twice in a minute to be 3-2 ahead with barely a minute remaining, only for Seagulls’ centre back Mark Richards to take the game to penalties with his first goal for the club.

Brixham – who like Mousehole were promoted from Division One to the Premier this season – went ahead in the 5th minute when Steve Bowker latched on to a long ball to scoop the ball over Mikey Flores in the visitors’ goal.

Mousehole were finding it hard going against opponents whose robust style suited their short and narrow pitch, although keeper Connor Smith did well to keep out three goal bound attempts by Tallan Mitchell during the first 45 minutes.

At the other end, captain Billy Curtis’ goal-line clearance prevented Brixham doubling their lead just before the half-hour, but five minutes later the hosts wasted a massive opportunity when Reece Somers fired wide from the penalty spot after Flores was adjudged to have tripped Finn Roberts.

Mousehole managed the second half much better, but it was only in the last 15 minutes that they began to create any worthwhile chances – ironically after top scorer Kieran Toland became The Seagulls’ first ‘sin bin’ offender of the season after questioning the wisdom of one of the referee’s decisions.

The ten men pressed forward against a tiring Brixham side and substitute Gerens James at last brought Mousehole level as he touched in from six yards fellow substitute Glenn Gabriel’s cross-shot in the 86th minute.

As the visitors scented blood, keeper Smith pulled off an agile save to keep out Lez Cela’s 20-yard drive destined for the top corner.

And so to extra time.

With Mousehole now in control and looking the more likely to break the deadlock, Rheiss McClean slotted home from close range after Glenn Gabriel’s shot was deflected on to the bar by Smith in the 12th minute of the first period to put The Seagulls ahead at 2-1 for the first time in the tie.

But another twist in the drama happened seven minutes into the second period of extra time, as Brixham were awarded a highly disputed penalty, this time Somers making up for his earlier miss to make it 2-2.

And amazingly the home side scored again a minute later when top scorer Finn Roberts rose highest to nod a cross into the net for a 3-2 scoreline, prompting jubilant celebrations both on and off the pitch.

But in the dying moments, Smith could only parry another Glenn Gabriel shot from the edge of the box following a free kick, and Mark Richards was quickest to the loose ball to poke over the line to grab a dramatic equaliser.

In the penalty shoot-out, Brixham hit the bar with their first attempt, but Kieran Toland, Glenn Gabriel, Rheiss McClean, Lez Cela and Tallan Mitchell kept their cool to convert all five spot kicks and make Mousehole the first SWPL team through to the quarter-finals.

The League Cup quarter-final ties are due to be played on or before 29th February.

Mousehole are still in all three Cup competitions, with a home quarter-final tie in the Cornwall Charity Cup coming up against Helston Athletic next week on Tuesday 26th November at 7.30pm.

The fourth round of the Cornwall Senior Cup – with the draw yet to be made – is due to be played on or before 4th January.

In the meantime, it’s a return to League action this Friday, 22nd November, when Wendron United visit Trungle Parc for The Seagulls’ second match under their new floodlights, kick off 7.30pm.