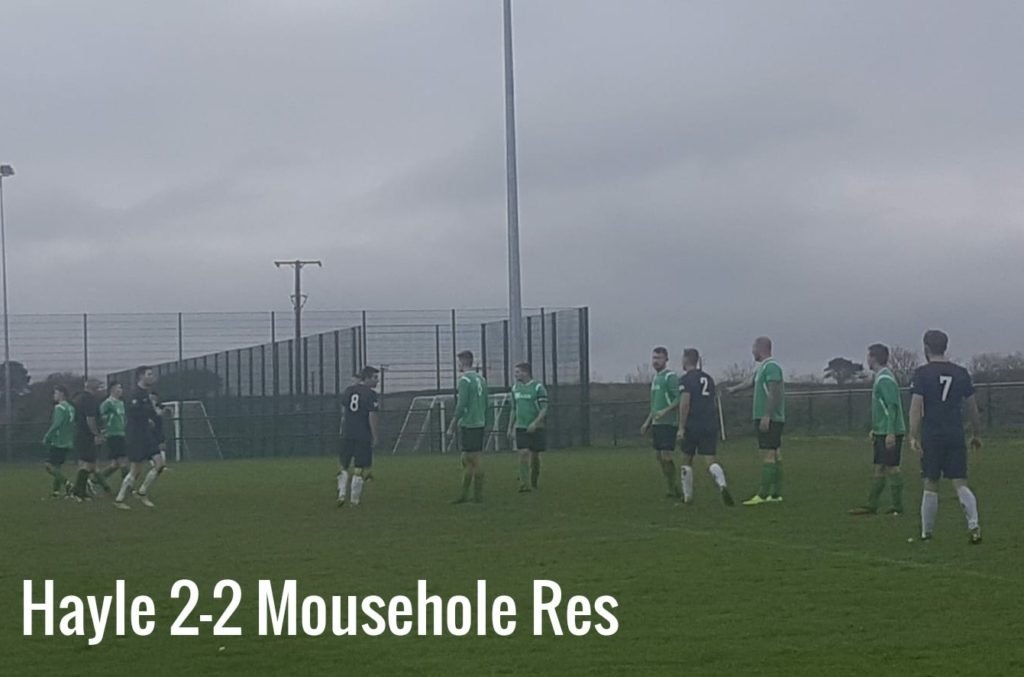 Mousehole Reserves returned to the site of their glorious and historic Cornwall Junior Cup Final win against Foxhole Stars in May, this time for a league match against their West Penwith rivals Hayle.

The wet weather had caused most local games to be called off, so much credit goes to the Hayle ground staff for getting this game on, with the adjacent 3G surface on stand-by.

Hayle, in good form after four consecutive wins, had started the match in the top four, while Mousehole were looking to build on some encouraging recent results as they looked to consolidate a mid-table position after a two-step promotion in the summer.

Mousehole kicked off down the slope towards the clubhouse and started brightly, some slick passing between the midfield trio of Matt Howes, Nathan Goodspeed and JJ Simmonds causing Hayle problems. The first chance of the game came from the right hand side through good work between Matt James and Jacob Trudgeon, resulting in the latter’s brilliant cross coming close to a goal.

After surviving the visitors’ bright start, the hosts started to settle into the game with in-form striker Cameron Irish putting Mousehole’s back four under pressure.  And it was Irish who put Hayle in the lead on 20 minutes, out-muscling Tom McGarry to slot a long ball from the back past stand-in goalkeeper Caleb Marsden, with Mousehole’s claim for a foul on McGarry being turned away by referee George Pattison.

The goal settled Hayle down and they forced Marsden into a couple of important saves, but Mousehole came close to levelling things up before half-time when a low powerful cross from Tom Hands somehow failed to end up in the back of net.

The second period started in similar manner to the first half, with Mousehole moving the ball around quickly with the middle three confident on the ball.  And the bright start soon brought a deserved equaliser, as a superb free kick whipped in from the right by Tom Hands was tapped in by Michael Fitchett from six yards out for his fourth goal of the season.

After the goal, Mousehole started to sit off their opponents, allowing them to play some good football and create problems.  Marsden pulled off the best save of the match going down to his right to push round the post a shot heading into the bottom corner.  And Hayle’s pressure soon led to them regaining the lead, Toby Angwin’s fierce strike forcing Marsden into another save but unluckily palming the ball into the net.

Straight from conceding the goal Mousehole’s first substitute Pasha Wilson nearly made an instant impact, running on to a searching pass from Goodspeed down the right hand side and hitting a great strike across the goalkeeper narrowly missing the far post.

With 20 minutes to go, Mousehole Manager Harry Tonkin changed to a more attacking formation, bringing on Jamie Simons and Joe Davies, with the latter crossing a great ball from the left and Fitchett just missing with a header from 10 yards out.  But five minutes later came a second equaliser, Tom Hands scoring with a driven free kick from the right into the top corner.

The game was almost over when former Mousehole player Wade Brown missed a great headed chance to give Hayle the win.  But this was a very good away performance and point against one of the best sides in the league for Mousehole Reserves, with “star men” Tom Hands providing a goal and an assist, and a solid all-round performance from local Hayle lad Nathan Goodspeed in midfield.

Mousehole Reserves are now on an unbeaten run of three games, taking them up to 9th in the table.  They will look forward with confidence to their next fixture, an away trip this Saturday (30th November, 2.30 kick off) to Mullion, who are one place and one point above.  Their next home game at Trungle Parc is on Saturday 7th December (2.30pm) against Wendron United, with the two teams having drawn 4-4 at The Underlane in mid-September.