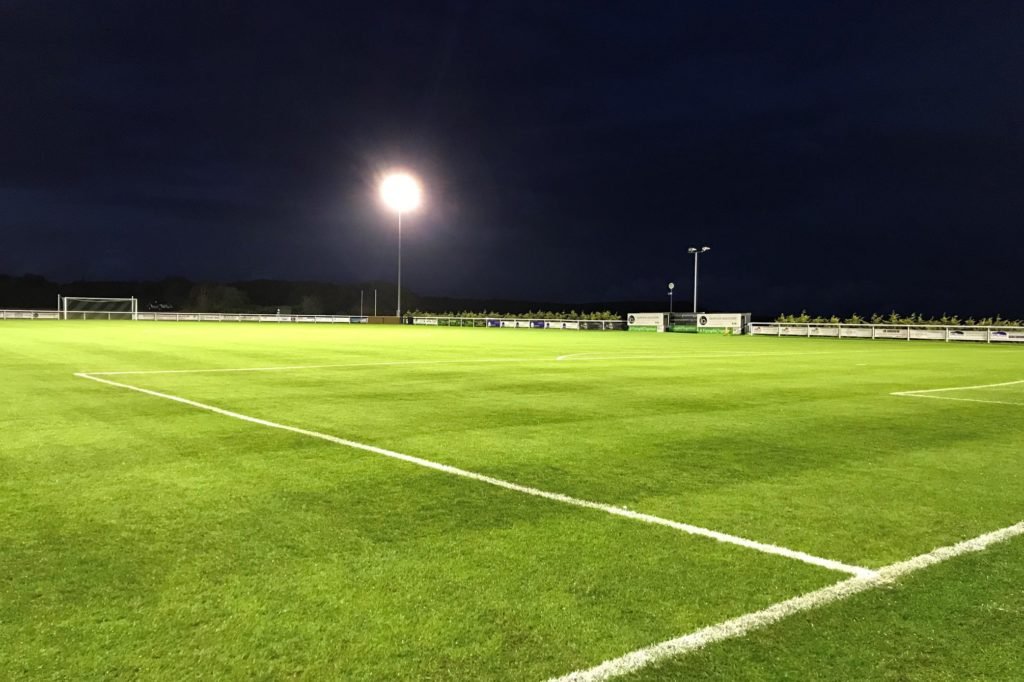 The Seagulls hosted their second match under their new floodlights but were upstaged by local rivals Helston Athletic whose two second-half goals put them through to the semi-finals of the Charity Cup (the Durning-Lawrence Cup)*.

Despite defeat, Mousehole’s season still has plenty of promise, as they are still in two other cup competitions – the Cornwall Senior Cup and the SWP League Cup – as well as sitting in the leading group in the league.

With the pitch in remarkably good condition after a month of wet weather, the large crowd witnessed a tight goal-less first-half contest with the visiting Blues more direct and physical style giving them a slight edge.  The Seagulls’ Mikey Flores with half a dozen saves was by far the busier of the two keepers, and it was only in the last few minutes of the half that Mousehole made inroads into Helston’s defence, Pasha Wilson having a great chance on his starting debut with a shot into the side netting after a long low cross from the left in the 44th minute.

In the early part of the second period, Mousehole came much more into the game, Blues’ keeper Steven Oliver having to go full length to keep out Glenn Gabriel’s 18-yard drive after a weaving run in the 56th minute.  But Mousehole soon found themselves on the wrong side of several marginal decisions by referee James Long.  Firstly, a Kieran Toland close-range ‘goal’ was disallowed for an alleged handling offence in a packed penalty area on 57 minutes, and then the home side conceded two goals in controversial fashion.

While Mousehole expecting the whistle for a foul in midfield, Alfie Flack sprinted on to a short back-pass to slot past Mikey Flores in the 71st minute, and five minutes later Ollie Brokenshire touched the ball in from close range amid loud appeals for hand-ball, with Jamie Devine sin-binned for expressing his opinion.

Mousehole have now lost twice to Helston this season – the first being a 3-1 league defeat at Kellaway Park six weeks ago – but these are the only losses The Seagulls have suffered in their 21 games in all competitions so far, and a full-strength side on the Trungle Parc pitch for the return league match on 24th January will be determined to gain revenge.

*This year’s Charity Cup is in aid of the Merlin MS Centre, which provides therapy and support for anyone in Cornwall living with a long-term neurological condition such as multiple sclerosis, stroke and Parkinson’s (www.merlinmscentre.org).

This Saturday (30th November, kick off 3pm), Mousehole will be looking to record a double over visitors Bodmin Town.  In the second match of the season, a Kieran Toland hat-trick enabled new manager Jake Ash to secure an eye-catching 3-1 win at Priory Park, where he finished his playing career earlier this year.  Bodmin are currently one place and four points above fifth-place Mousehole but have played two games more.

** In the 4th round of the Cornwall Senior Cup to be played on Saturday 4th January, Mousehole have been drawn at home in a fascinating tie against present table-topping St Austell.  It was two seasons ago that The Seagulls – then a league below and the definite underdogs – caused a Cornwall-wide shock by knocking out St Austell 3-1 after extra time in the semi-finals of the same competition.  As an indication of Mousehole’s progress since then, the two sides also meet in the same league at St Austell’s Poltair Park in 10 days’ time, having drawn 1-1 at Trungle Parc on 14th September, with St Austell now currently 11 points ahead of Mousehole from four games more.

***Mousehole still have a League Cup quarter-final to look forward to in February, with the draw to be made after the completion of the other third round ties.