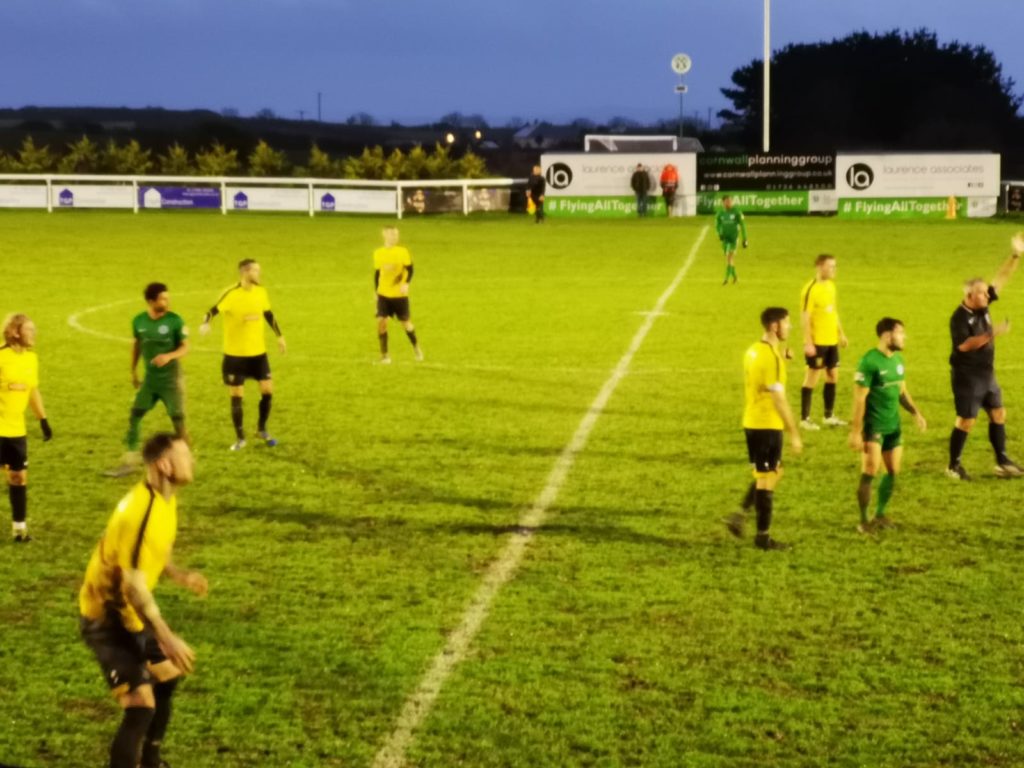 It’s a measure of Mousehole’s progress that they recorded a well-earned league double against a very competitive Bodmin Town side, whose impressive recent history rightly puts them among the ‘giants’ of Cornish football.

Since the formation of the South West Peninsula League 12 years ago, the Priory Park club have won a total of 15 major trophies as Premier Division champions, and League Cup and Cornwall Senior Cup winners.

From first whistle to last the crowd who braved the cold, windy and wet weather were treated to a exciting end-to-end contest with both sets of players battling hard to overcome the horrible conditions both overhead and under-foot.

Bodmin arrived determined to make amends for their 3-1 home defeat by Mousehole in the first week of the season – their former player Jake Ash’s second match as Mousehole’s manager.

On this occasion, the visitors started strongly in the first 15 minutes, but Mousehole gradually found their feet and keeper Scott Kellow had to make vital saves from Kieran Toland on 18 minutes and Amara Bakayoko on 22.

Then came two goals in nine minutes.  Rheiss McClean found a tiny amount of space in a crowded penalty area 12 yards out to poke the ball right-footed into the corner to put the home side ahead in the 25th minute, but the visitors equalised when centre-back Kai Fisher slid a great 50-yard ball down the right for Ethan Phillips whose pulled-back cross was converted accurately inside the post by Harry Clarke.

With playing conditions ever worsening, the second half was lit up by three memorable goals.  Mousehole regained the lead on 59 minutes, Lez Cela driving forward from halfway to feed Amara Bakayoko just outside the corner of the box, with the wingman bringing the ball inside on to his lethal left foot to crash an unstoppable shot from 20 yards into the top left hand corner.

Bodmin then enjoyed a 20-minute period of good possession as they pressed forward threateningly for another equaliser, but Mousehole showed great character and concentration with some expert interceptions and courageous blocks to preserve the lead.

And their resilience was rewarded at the other end in the 84th minute when Kieran Toland ran at a retreating back line to square the ball for Lez Cela, who despite being surrounded by defenders skilfully switched the ball on to his right foot to curl a shot from 12 yards off the post for a 3-1 scoreline.

Recent signing Glenn Gabriel came on as a substitute in the 85th minute to keep the visitor’s defence under pressure with his direct running, and within three minutes he had scored the fourth goal, released into space on the right by Steve Burt’s quick pass to home in unopposed on goal and drive the ball firm and low into the far corner.

Mousehole remain in 5th place, now just one point behind Bodmin with two games in hand.  They have also opened up an eight point gap over 6th place Newquay from two games fewer, and ten points over 7th place Falmouth Town from the same number of matches.

Another massive challenge awaits Jake Ash’s side next Saturday when they travel to Poltair Park to face league leaders St Austell.  The two sides drew 1-1 at Trungle Parc earlier in the season in a closely-fought encounter, with The Seagulls coming mightily close to taking all three points.  At the weekend The Lillywhites won 6-0 away at last season’s promoted Division One West champions Liskeard Athletic, and are now 11 points ahead of Mousehole but have played four games more.

After the St Austell game comes an away trip to Camelford (Saturday 14th December, kick off 3pm), followed by no less than seven consecutive home games, stretching through to early February, starting with a mouth-watering floodlit encounter with Falmouth Town on Thursday 19th December (7.30pm) and then the Boxing Day clash with Penzance at 12-noon.