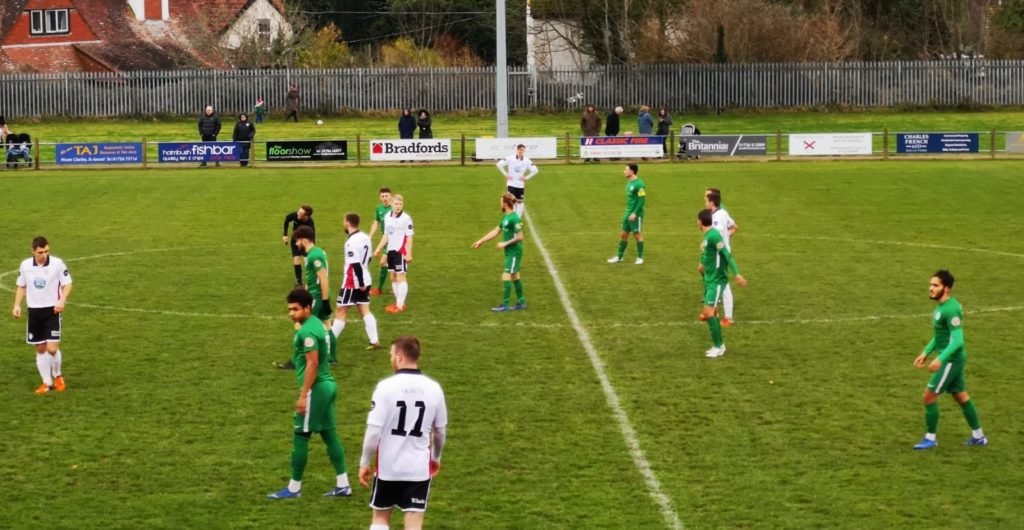 A point away from home against the team at the top of the table would normally be a cause for celebration, but in truth this was a game Mousehole should have won convincingly.

The Seagulls took an early lead and played against ten men for nearly an hour, but despite a huge amount of possession they were wasteful in the final third, and late in the game an error at the back let the home side back into the match for an improbable equaliser.

The draw lifts Mousehole up one place into fourth above Bodmin Town on goal difference, but still 11 points behind St Austell with four games in hand.

The Lillywhites’ Dan Perryman had a great chance to put the home side ahead in the 5th minute, but lobbed over from distance after Mousehole keeper Corey Harvey half-blocked a misdirected back pass.

Kieran Toland then put the visitors into the lead in the 8th minute, swerving a great free kick from the corner of the penalty box high inside the far post, for his 25th goal of the season.

Back came St Austell and Harvey had to dive full length to keep out a downward header from a free kick, while at the other end Amara Bakayoko mishit  a reasonable chance wide from 10 yards on 18.

In the next minute, Toland had a wonderful chance to double the score but headed Tallan Mitchell’s free kick sideways from just a few feet out.

The home side were using their aerial power to good effect, with a header from a long throw striking the bar in the 21st minute.  But they nearly conceded an own goal on 24 when Lez Cela’s free kick skimmed off a defender’s head and millimetres past the post.

In the 32nd minute, Mousehole’s best move so far split the defence to give Bakayoko a clear run on goal but he hastily shot over from inside the box.

The Lillywhites were reduced to 10 men in the 36th minute, Martin Giles receiving a straight red card from Oliver Willcocks for stamping on Steve Burt after a tussle in midfield.

With their superior numbers and possession, Mousehole came close to another goal in the period before the interval, Tallan Mitchell having two shots saved by  Jason Chapman in the home goal and firing just wide with the keeper beaten.

In the meantime, the home side retreated into massed defence, a formation they maintained for most of the rest of the match, with an occasional threat from long throws and Hayden Turner’s set pieces.  One 25-yards free kick in the 39th minute was just wide of the near post with Harvey stranded.

Mousehole continued on top from the start of the second half, Cela testing Chapman on 48, Toland scooping over a close-range chance at full stretch from Bakayoko’s cross on 62, and Rheiss McClean volleying wide on 65.

St Austell’s survival strategy nearly paid off in the 67th minute when Turner’s floated corner was scruffily cleared away, but they were very fortunate in the 70th minute when Mitchell arrived late in the box to nudge Bakayoko’s pulled back cross into the net, only for the assistant referee Winkworth to flag controversially for offside.

With Mousehole swarming around the edge of the penalty area but unable to make headway against The Lillywhites’ rearguard, Toland resorted to a long-range shot over the bar in the 76th minute, and the risk was becoming clearer that the hosts might just mount a late threat.  And so it happened.  A long downfield ball out of defence in the 78th minute for the tireless sole striker Dan Perryman to chase was allowed to bounce into the box where the hitman slotted a great low angled shot across Corey Harvey into the far corner.

Buoyed by that score, St Austell stood firm in defence, Mitchell firing just over on 80, Bakayoko close on 88 with a cross-cum-shot, and Toland heading the wingman’s cross over on 90.  The home side and their supporters celebrated at the final whistle as if they had won, whereas for Mousehole a draw felt like a defeat.

Although having lost only once in the League this season – away at Helston Athletic – Mousehole have now recorded a division-equalling five draws from 17 games so far.  Those draws – away at Falmouth, Porthleven and home against Wadebridge, as well as a ‘double’ draw against St Austell – were all matches which they dominated for large periods and could have won with better finishing.  Manager Jake Ash and his coaching team know they will need to put that right as a priority, in order to keep the promotion challenge on track.

This coming Saturday (14th December, 3pm) Mousehole travel to Trefrew Park to face 9th place Camelford, looking for a league double over the side they beat 3-2 in August in their ‘milestone’ first home game after promotion to the highest playing level in their history.

After that comes an amazing sequence of seven home games in a row lasting until February.