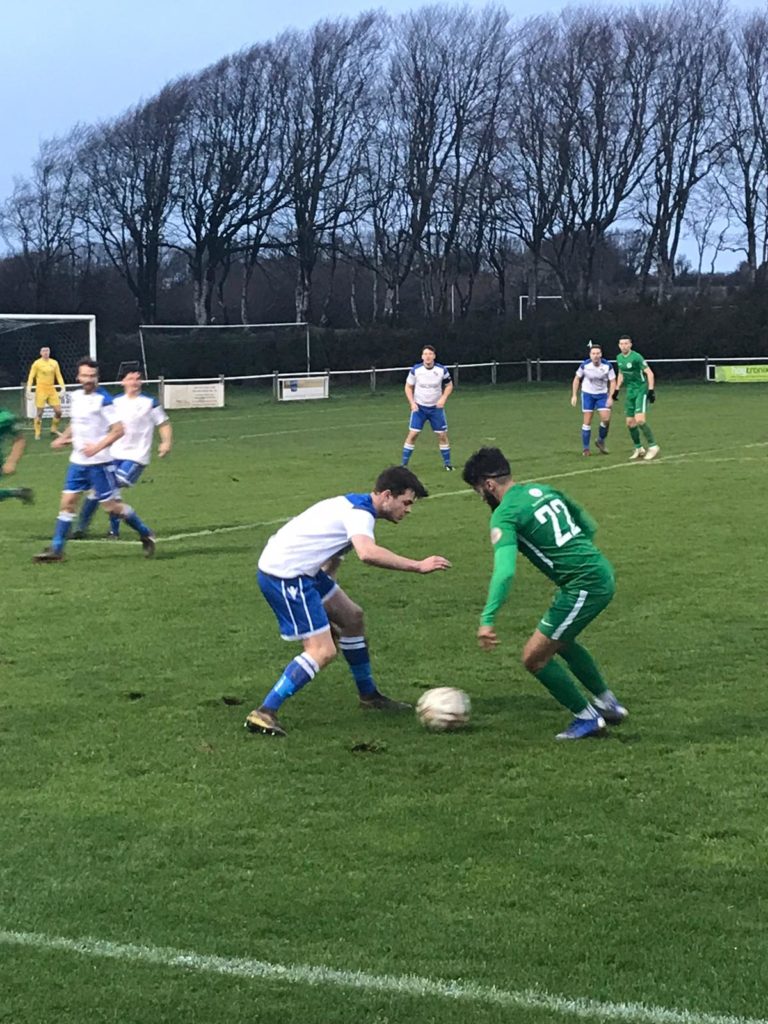 After a late-morning pitch inspection, Mousehole’s game at Camelford was declared to be ‘on’, so The Seagulls were able to complete their last scheduled away league game until mid-February and won thanks to first-half goals by wingers Rheiss McClean and Amara Bakayoko.

On a difficult soggy surface and in a strong wind, a scrappy game was played out, with referee Tony Rogers issuing a liberal collection of yellow cards to both sides, but despite being some way below their best Mousehole came away with a hard-earned three points to keep them in 4th place in the table.

With a run of six home league games now in front of them, Jake Ash’s team have a great opportunity to strengthen their challenge for one of the top two promotion places.

Winger Rheiss McClean gave the visitors an early lead, beating one man on the edge of the penalty area before zippin a low right-footed shot low into the net in the 5th minute to reach a double figure tally of goals for the season.

The home side came back with quick attacks, Joe Reeve firing straight at keeper Corey Harvey when well placed in the 10th minute, and Mark Richards scooping the same player’s shot off the line when the keeper failed to get distance with a punched clearance on 14.  But a minute later The Camels drew level from a disputed penalty after Steve Burt’s sliding tackle to halt Kian Burns’ penetrating run from halfway was deemed to be a foul.  Ed Harrison equalised from the spot and Corey Harvey was then sin-binned for continuing his discussion with the referee

Captain Billy Curtis took over in goal but had relatively little to do as The Seagulls managed possession well during Harvey’s period on the sidelines that extended to 15 minutes.

Restored to a full eleven, Mousehole regained the lead on 35 minutes after Tallan Mitchell’s cross produced two close-range chances, with Amara Bakayoko finally doing enough to get the ball over the line for his 12th goal of the campaign.

In a second half of no real quality or pattern of play, Camelford’s attempt to get back into the game suffered a setback in the 80th minute as tough-tackling Andy Boxall was sent off for a second yellow card.  The ten men responded on the front foot but rarely made threatening inroads into the final third.  Rather,

Mousehole created several late breaks from their own half but substitute Glenn Gabriel failed to convert gilt-edged one-on-one chances in the 83rd and 90th minutes.

The sequence of home games starts this Thursday evening (19th) with a 7.30pm kick-off against Falmouth Town.  The 6th-place visitors are 8 points behind Mousehole from the same number of games.  The two sides drew 0-0 at Bickland Park in early August, Mousehole’s first-ever game at Step 6 after promotion, with The Seagulls on top for most of the first 70 minutes but then coming under pressure in the closing stages.  The attendance on that occasion was an impressive 253, and with Falmouth’s sizeable away following, supporters are advised to arrive early to avoid traffic congestion in the vicinity of Trungle Parc.