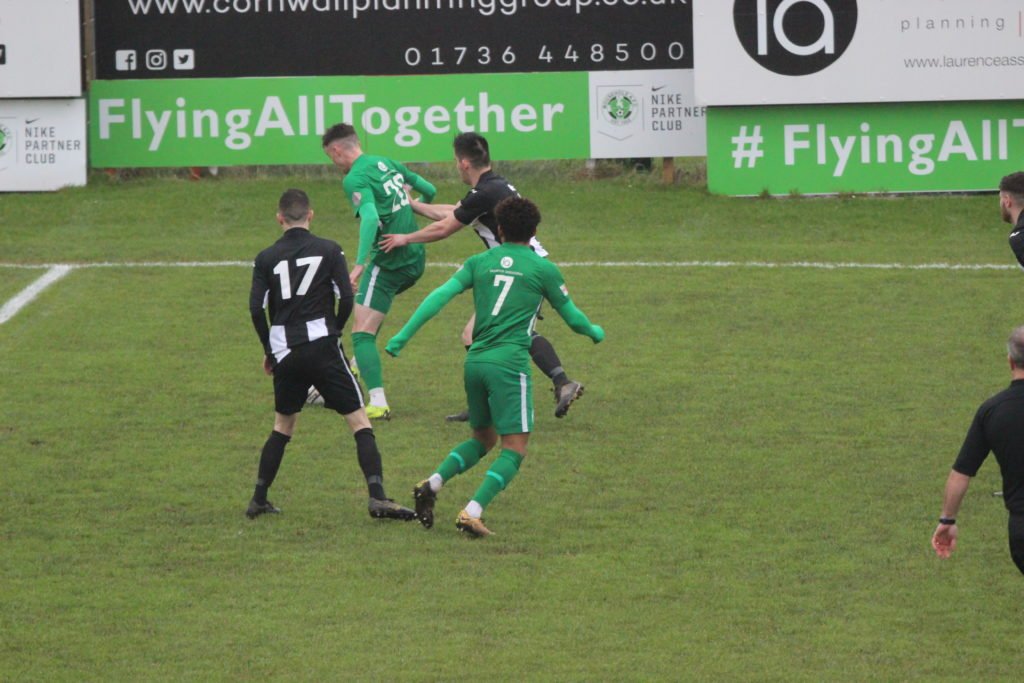 Mousehole reached the half-way point of the league season with a comfortable 4-0 win over local rivals Penzance in front of the biggest Trungle Parc crowd of the season who braved the wet and windy conditions.  After heavy overnight rainfall, Referee Kevin Knowles declared the pitch playable an hour before the mid-day kick off, and the decision was well justified as the surface stood up remarkably well and an entertaining 90 minutes of football followed.

Out of the first 19 league matches, The Seagulls have now won 13, drawn 5 and lost just one (away at Helston Athletic) to sit in third place in the table, but with the top six all having played a different number of games, the teams occupying the two promotion positions are unlikely to become clearer until later in the season.

Mousehole dominated possession from the start, but Penzance’s squad of youngsters with a sprinkling of older heads deserved great credit for getting to half-time only one goal in arrears.  But in the second half the continuous flow of traffic towards the visitors’ goal was too much as the hosts confirmed their overall superiority albeit with just three further goals, leaving the Magpies with the consolation that their hard work and tenacity avoided a potentially much bigger defeat.

The hosts created five chances in the opening ten minutes but were foiled by obstinate defending until Amara Bakayoko’s low cross from the right skimmed into the net via the far post in the 11th minute.  The experienced Barrie Wyatt in the Penzance goal then rescued his side with good saves to deny Bakayoko and Rheiss McClean, before the visitors broke over the halfway line with menace for the first time in the 36th minute, Daryl Richards denied by Mark Richard’s last-ditch tackle and the follow-up cross just eluding Morgan Kewn at the far post.

Penzance were now seeing more of the ball and triggering the occasional fast break, but Bakayoko came close to doubling the lead in the 38th minute with a shot blocked from six yards, and Billy Curtis ventured upfield from the back to curl a left-footed chip just past the angle a minute before the interval.

Penzance started the second half on the front foot, Anton Oliver clipped by Jamie Devine when in a promising position 30 yards out, with the swerving free lick presenting home keeper Cory Harvey with a rare piece of action.

Newcomer Hayden Turner produced a burst in from the left on 51 minutes only to be thwarted by the alert Wyatt, but he had to wait only a few minutes more for a debut goal, showing speed and composure to stroke Rheiss McClean’s defence-splitting pass into the net on 58 for a 2-0 scoreline.

Amara Bakayoko made it 3-0 with his 14th goal of the season in the 70th minute, a low 18-yard shot inside the post in the 70th minute , and with Mousehole now in complete control of the play McClean’s 20-yard drive was expertly tipped over by Wyatt on 72.

Substitute Glenn Gabriel threatened further goals in the 85th and 86th minutes when one shot was blocked in front of goal and another from 25 yards zipped just wide.

For Mousehole, 2019 has been a landmark year, with promotion to the Premier West League to play at the highest-ever level in the club’s history, ongoing ground improvements including the installation of floodlights, and a developing reputation for high-quality coaching that is attracting some of the best talent in the region.

For 2020, the club’s resolution is to continue the momentum of recent developments, including a challenge for promotion to the next level (Step 5 of the non-league system), and work to bring Trungle Parc up to the standards required by the higher league.

The New Year fixtures start on Saturday  4th January with a home fourth-round tie in the Cornwall Senior Cup against current league leaders St Austell, with a 2pm kick off.  The two sides have already drawn 1-1 in both league matches this season, so a close encounter is expected.