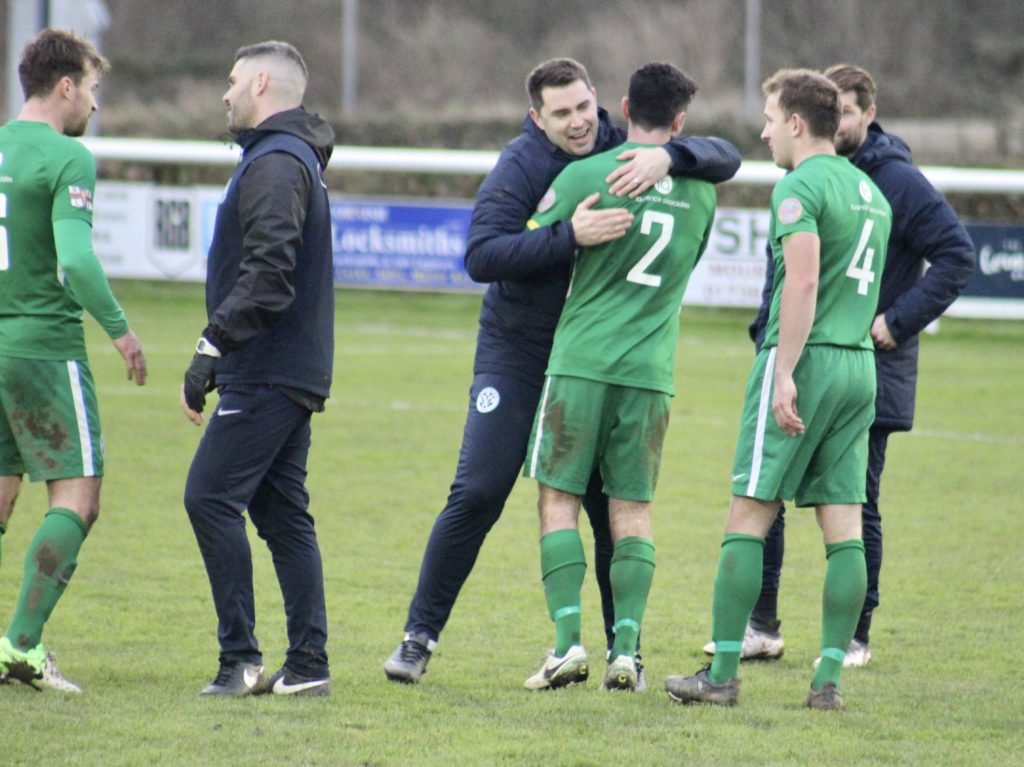 The opening fixture of 2020 saw The Seagulls put in a spirited performance to beat the league leaders and reach the quarter-finals of the Cornwall Senior Cup.

This was the third encounter of the season between the two teams, the previous two league games ending in 1-1 draws but with Mousehole close to taking all  three points on both occasions.

This time, Mousehole were well on top in the first half, but half a dozen chances or near-misses, and one defensive error at the other end, led to an improbable 1-1 scoreline at the interval.  In the second half St Austell came back strongly into the match, but in a feisty finale and a dramatic period of added-on time Mousehole got the winning goal their overall play deserved.

On a bright and cool afternoon with the pitch in very good condition for the time of year, Mousehole took an early lead as midfielder Scott Imade pounced on a miskick in The Lillywhites’ central defence from Glenn Gabriel’s low cross and prodded home the loose ball from 10 yards in the 4th minute.

It might have been 2-0 in the 21st minute, central defender Jamie Devine making a surging run into the box with the aid of a slick one-two with Imade, and squaring the ball across an open goal just too far ahead of Gerens James.

James was getting into some good positions and came close four times in 7 minutes as the visitors’ defence were put under extreme pressure, heading Amara Bakayoko’s cross over from 6 yards on 24, having a goalbound shot deflected over on 27, a close-range drive blocked on 30 and another chance put over a minute later.

St Austell showed a flash of attacking instinct in the 32nd minute when Mousehole gave the ball away in midfield for danger-man Dan Perryman to drive just wide from 20 yards.  But another bit of casual play gifted the visitors an equaliser on 35 minutes.  Will Tinsley seized on a risky clearance by Cory Harvey to move down the right and cross for the unmarked Chris Reski to convert an easy chance from 8 yards.

Back came Mousehole, with Bakayoko only able to find the side netting when well placed on 38, and having shot deflected just past the post on 41.  At the other end, Perryman was inches away from a low right-wing cross to the far post in a rare St Austell foray upfield, while the half came to a close with The Seagulls disappointed by two refereeing decisions.  Firstly Gerens James’ near-post header into the net from a Bakayoko cross was ruled offside, and shortly afterwards Bakayoko was sandwiched between two defenders when through on goal only for play to be waved on.

After the interval, Mousehole still looked the more threatening of the two sides, but a fascinating sprint duel was emerging between the home side’s Mark Richards in central defence and lone striker Perryman, with the latter determined to keep Cory Harvey busy in goal.

The lurking Gerens James put Mousehole back in front in the 57th minute, tapping over the line from a couple of inches at the far post after Bakayoko’s cross-cum-shot had beaten keeper Jason Chapman and struck the woodwork.

With The Lillywhites now pressing upfield the game became an exciting end-to-end affair.  Gerens James’ just missed the far post with a turn and shot on 60 minutes, while Dan Perryman with an instant drive in minimal space from 18 yards on 68 minutes forced Cory Harvey into the first of three vital saves.  And with the game opening up, Chapman made a great block from Bakayoko as Mousehole broke forward three-on-two from the halfway line in the 76th minute.

In the 77th minute, Harvey made a spectacular save from Perryman’s top-corner drive from 10 yards, but a minute later St Austell scored the equaliser that had looked likely for some time, substitute Jack Hooper side-footing home as Perryman cushioned a back-post header across the six-yard line.  In the 85th minute Hooper then nearly snatched another goal with a low shot saved by Harvey as Mousehole lost possession 25-yards out.

An exciting game of football turned sour in the 86th minute after a fierce tackle in midfield by St Austell’s Martin Watts prompted an on-pitch melee as  tempers boiled over.  After several minutes, Referee Matthew Carney issued three red cards – to Watts for the tackle, Gerens James for retaliation and visitors’ manager Chris Knight for his active involvement in the fracas, while Jake Ash also received a yellow card for continuing his conversation with the referee.

With added-on time came added drama.  Winger Amara Bakayoko scored his 15th goal of the season to make it 3-2 on 90+3 minutes, stroking the ball into the net from Paulo Sousa’s careful pull-back after the speedy defender had made a great run into the penalty area to latch on to a superb defence-splitting pass from midfield.  And on 90+5 Dan Perryman so nearly took the game to extra time with a low six yard shot, but Cory Harvey again won the battle with an agile diving save to hold the ball on the line.