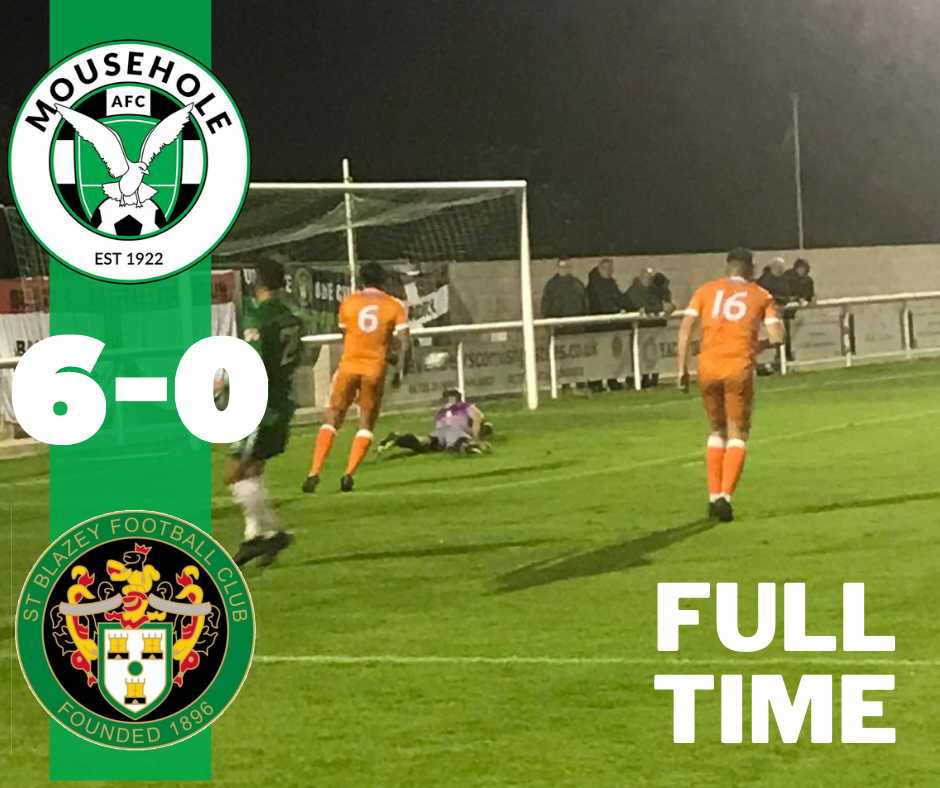 The Seagulls made it four league wins out of four, with Hayden Turner catching the eye with a four goal haul, but this was a complete team performance full of intensity, speed, passing, movement and a gritty determination to keep and win back the ball.

20 mins: Save – Seagulls’ keeper Dom Angove at the other end goes full length to palm a strong header from Sam Cooper round the post following a corner

22 mins:  GOAL to Mousehole, now 2-0:  A rare goal for centre back Mark Richards as he prods home from inside the six yard box after a well-worked short corner on the left.

23 mins:  Another GOAL, now 3-0:  Hayden Turner accelerates between the two centre backs from 40 yards out, rounds the advancing keeper and slots into the empty net

40 mins:  GOAL, 4-0:  Turner again, this time latches on to a lofted pass for a one-on-one with Duffey and strokes the ball low into the far corner for a well-earned hat-trick

43 mins:  Save – Dom Angove is called into action with a flying save from a fierce 10-yard shot by left back Jack Tribble as St Blazey venture upfield

44 mins:  Close – Jude Boyd nearly opens his account for the season as he shows great speed to fashion a chance down the middle, but lobs just over the bar as the keeper comes out

48 mins:  GOAL, 5-0:  Tallan Mitchell drives into the top corner from the centre of the box as Kieran Toland and Josh Magin skilfully open up the defence on the right hand side

57 mins:  Close – Jude Boyd’s run and shot is matched by Jordan Duffey who tips it over the bar

60 mins:  Close once more – Kieran Toland is eager to get in on the goal action and his dipping swerving shot just clears the crossbar

62 mins:  GOAL, 6-0:  Hayden Turner’s timing, movement and pace earn  him an opening past the covering defender and his low drive just inside the far post from 15 yards brings him his fourth goal on the night

76 mins:  Mousehole substitution – Jude Boyd is replaced by Tom Hands, with Josh Otto moving from left back to right wing

The Seagulls’ impressive four-game start to the season has seen them score 23 goals and concede just one.  They now face Saltash United at home this Saturday (26th), arguably the toughest challenge so far.  The Ashes have won two and drawn one of their three league matches, and have won all three of their Cup matches against higher-league opposition, one in the FA Vase and two in the FA Cup, the latest a 3-1 home win against Step 4 Cirencester on Tuesday.