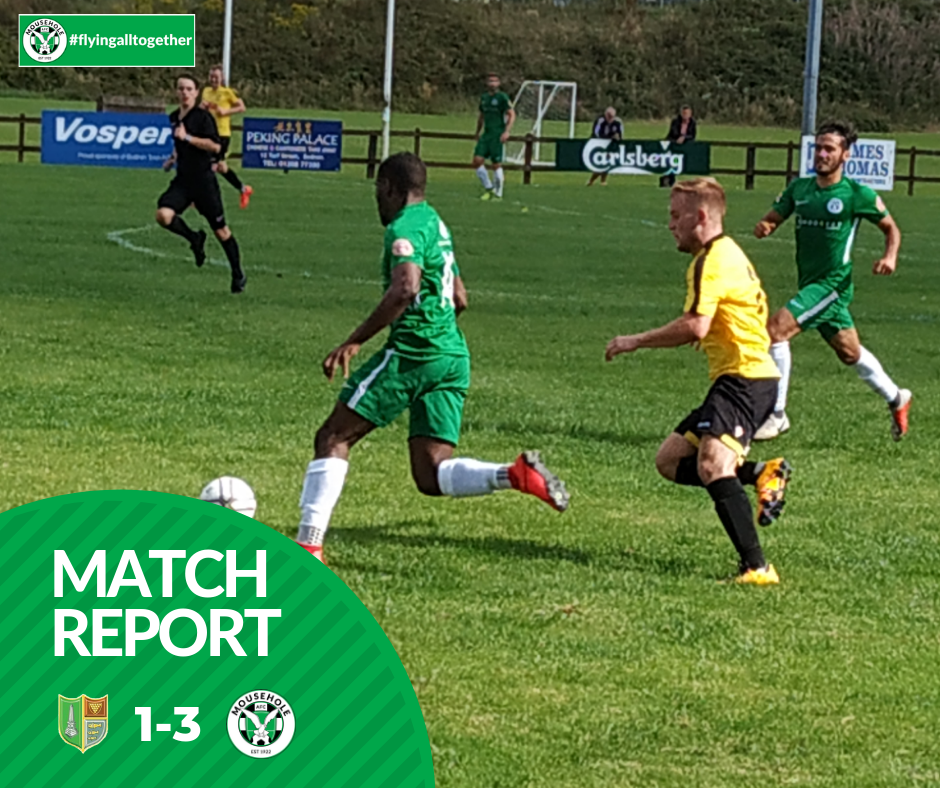 Anyone who doubted that newly-promoted Mousehole could hold their own against Cornwall’s long-established ‘big guns’ will now have to think again, after a comprehensive win at the home of Bodmin Town, the region’s biggest trophy winners in recent times.

Results after a tough opening two fixtures in four days, a draw at Falmouth Town followed by this win, give The Seagulls an excellent platform for the season and justify the club’s footballing philosophy, based on passing, possession and patience.

Manager Jake Ash, returning to the club where he finished his illustrious playing career a few months ago, selected the same starting eleven as in the 0-0 draw at Falmouth on Wednesday evening, except for last season’s top scorer Gerens James replacing Lukas Corner.

But it was Kieran Toland who this time grabbed the goal-scoring headlines with a hat-trick, having put Mousehole into a 2-0 lead within the first 13 minutes.  The first came after 10 minutes when a short corner routine enabled Reece Mitchell to cross into the middle, where Toland latched on to the knock-down to net from six yards.  Three minutes later the same player’s run from deep easily beat the offside trap to take the ball round the keeper and into an empty net.

The remainder of the first half saw chances at both ends, with Mousehole controlling most of the play and creating openings to no avail, while Bodmin relied on the occasional quick break from midfield.

The Seagulls came close to settling the game early in the second period, but Bodmin were handed an unlikely lifeline in the 63rd minute when a jostle on the edge of the box was deemed to be worthy of a penalty, but Max Gilbert wasted the gift by sending his spot kick wide via the outside of the post.

The home side nevertheless piled on the pressure and came close twice a few minutes later, while at the other end Lez Cela, Gerens James and Amara Bakayoko all might have extended the lead.

Inside the last ten minutes, an unsavoury but unpunished off-the-ball incident by Jordan Trott on Bakayoko unsettled the visitors’ composure, and with centre back Nathan Summers now deployed up front Corey Harvey had to make a great double-save to prevent the hosts getting back into the match.

Finally, Kieran Toland brought relief with his hat-trick goal in the 86th minute , slotting in from a pull-back by Bakayoko whose electric pace on the right had created the opening.  And in the 89th minute, Bodmin got on the scoresheet when Lance Bailey drove a low shot into the far corner from 15 yards.

Mousehole and their great band of supporters will consider that their overall performance deserved a much greater margin of victory, while Bodmin may be wondering what might have happened if they had converted the chances that came their way.

Next Saturday, 17th August, sees a momentous occasion for Mousehole when they play their first home match at the highest-ever level in the club’s history with the visit to Trungle Parc of Camelford (kick off 3pm).  The Camels, who are in their 8th season after promotion to the Premier Division, open their campaign with a home game against Godolphin on Tuesday.