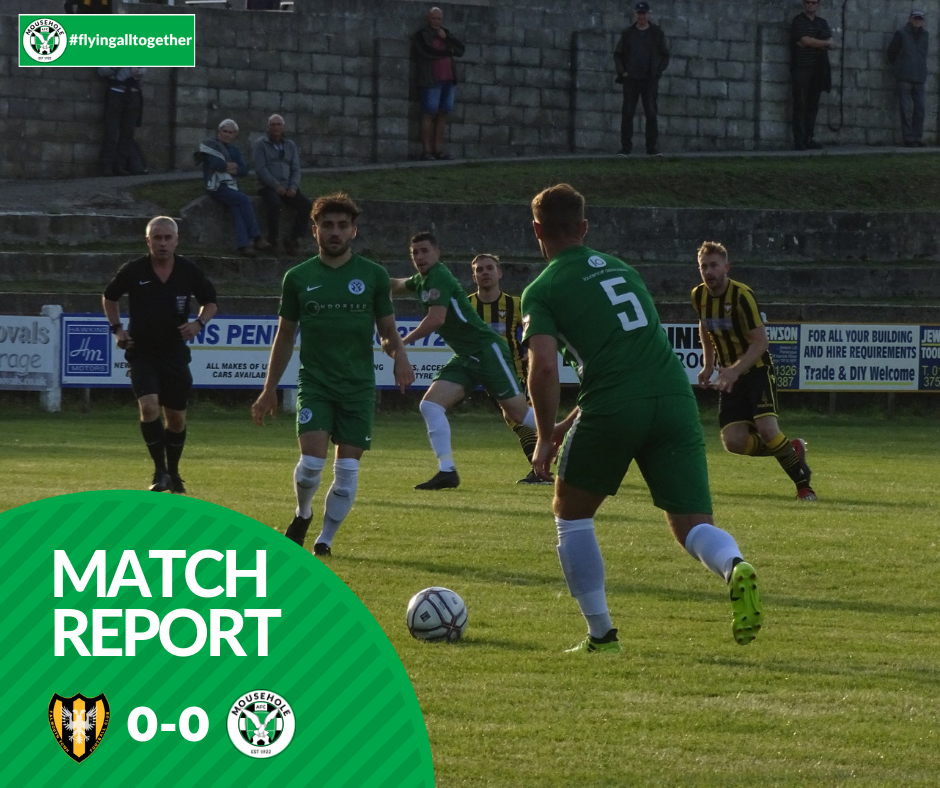 Mousehole’s first league match at the highest level in their history resulted in a goal-less draw at Falmouth, with a sizeable crowd of 253 boosted by a large and enthusiastic contingent of Seagulls’ supporters.

This was no defensively-minded nil-nil game, with Mousehole completely dominating the first 70 minutes but failing to turn their superiority into goals, allowing the hosts to come back into contention in an exciting end-to-end finish.

Jake Ash, in his first competitive match as manager, and returning to the club where he started his senior football career, may well feel this was a case of two points dropped, but on the other hand a point at one of the south-west’s recently most successful clubs is a creditable outcome and bodes well for the coming season.

Mousehole had pegged Falmouth back in their own half for much of the first half, creating five chances and drawing ten fouls before the Town mounted a rare attack in the 40th minute.

Lukas Corner was unable to connect with passes in front of goal in the 5th and 8th minutes, while former Seagulls’ ‘keeper Steve Parker-Billinge beat out shots by Kieron Toland (21 minutes)  and Lez Cela (35).  The ‘keeper was fortunate when he missed an inswinging corner on 22 minutes but centre back Mark Richards stabbed the ball wide at the far post.  Reece Mitchell then appeared to be tripped inside the box but loud claims for a penalty were ignored by referee Mark Hosking.

Five minutes before half time Falmouth finally got a look-in when captain Joe Cooper came up from the back to glance a header wide from a long throw by ex-Seagull Luke Johnson.

Amara Bakayoko had been influential in many of Mousehole’s attacking moves and his under-pressure marker Ollie Moody was substituted at half time after a succession of fouls and a yellow card.

Mousehole continued the pattern after the break, Reece Mitchell firing just wide after 48 minutes and Kieron Toland shooting over on 51, having a shot saved by Parker-Billinge’s feet two minutes later and a fierce drive parried by the keeper on 62.

On 65 Mitchell was again denied a plausible penalty after being baulked in the area and on 72 was surging in on goal when chopped down inches outside the 18-yard line, resulting in only a yellow card for Ben Oliver but a fruitless free kick.  Closer still, Lez Cela turned the defence inside-out in the 74th minute but shot into the side netting.

It was at that point that Falmouth upped their game with some fast breaks and numbers from midfield.  Seagulls keeper Corey Harvey had to be alert to cut out two dangerous through-balls and Ryan Martt hooked over a good chance from 8 yards from a knocked-down free kick.

However, the best chance of all came Mousehole’s way on 77 after an incisive move, Mark Richards’ quick pass forward allowing Kieron Toland to race into space on the right and pull the ball back for Amara Bakayoko, only for the shot on the wingman’s favoured left foot to slide just past the far post.

The let-off re-energised the home team and Corey Harvey had to make another two excellent saves in the last 12 minutes, tipping over a fierce 25-yard drive by Dave Broglino and then sprawling to keep out Matt Buchan’s side-foot shot in a one-on-one situation after Mousehole had uncharacteristically given the ball away.

So, a great opening game ended with honours even, with Mousehole playing plenty of good football and not looking at all out of place in the higher league, but lacking on this occasion that necessary element of ruthlessness to have secured the points long before Falmouth threatened a win of their own in the closing stages.

Challenges at this level come in quick succession, as Jake Ash takes his squad to another of his former clubs on Saturday (10th) with the journey up the A30 to Bodmin Town, Cornwall’s most trophy-laden club in recent years – kick off at Priory Park is 3pm.

The following Saturday (17th) Mousehole host their first ever home game in the Peninsula League Premier with the visit of Camelford – kick off at Trungle Parc is 3pm.