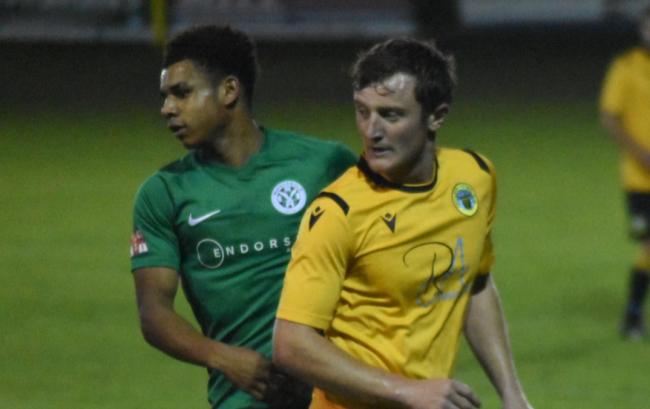 Mousehole raced into the last eight of the Charity Cup – this season in aid of The Merlin MS Centre* – with their second big away win in five days.

The result followed the 7-2 League Cup win at Wadebridge Town last Friday, and took The Seagulls’ unbeaten run of matches to 12 since the start of the season – and just as importantly, the goals are now beginning to reflect the performance.

Mousehole had allowed Porthleven to seize the initiative in the away League encounter five weeks ago, with the hosts coming back from two goals down to grab a last-kick penalty equaliser.  But this second meeting was different, Mousehole building up an early head of steam with four first half goals and threatening many more with a consistent display of assured passing and clever movement on a slick rain-affected surface.

The Seagulls started at a quick pace and fashioned several chances within the first ten minutes goalkeeper Ethan Fearn making a sprawling save from Kieran Toland and denying the same player and Rheiss McClean in quick succession in one-on-one situations.  But the opening goal on 19 minutes came from a defensive mix-up from a right wing cross as Fearn and centre back Jason Roberts got in each other’s way, leaving Toland to turn the ball into an empty net .

Two minutes later Lez Cela doubled the score, carrying the ball forward from halfway after a quick release by McClean and shooting low into the corner.

With Mousehole now relaxed and dominating, Scott Imade stole the ball just outside The Fisherman’s box and after an incisive one-two slid the ball home for 3-0 on the half hour.

And just five minutes later Kieran Toland hammered home a 35-yard drive high into the net after intercepting a pass and striding forward against a retreating defence, to complete The Seagull’s four-goal burst in 16 minutes.

Not content with the scoreline, the visitors continued on the front foot, with Amara Bakayoko miscuing from the six-yard line after Imani Matthews had opened up the chance with speed and skill on the left, and Fearn made a superb reaction save in added-on time from Billy Curtis’ deflected shot from the edge of the box.  At the other end Charlie Young came close with a header in the last action before the interval.

Five minutes into the second half, after a continuous spell of passing, Imani Matthews got behind the hosts’ defence to square the ball for Kieran Toland to a side-foot low into the net for 5-0 and a second hat-trick of the season taking him up to 16 goals in 12 games.

Porthleven created some chances of their own around the hour mark, Roberts heading just over from a corner, Dan Stidwell’s deflected 25 yard shot coming back off the crossbar, and Young slipping over when clean through on goal.

Substitute Steven Ziboth came on to create a series of problems for the home side, taking advantage of quick passes out of defence and on 71 minutes raiding swiftly down the flank alongside left-sided defender Paulo Sousa for the latter to squeeze a right-footed shot from 18 yards just inside Fearn’s near post.

Ziboth was close to claiming a goal of his own with marginally wide shots in the 73rd and 78th minutes, but the final few chances fell Porthleven’s way, with Mousehole keeper Mikey Flores having to be alert to thwart Young on 90+2 and then producing a superb flying save to stop Stidwell’s 25 yard drive going in the top corner.

The other teams remaining in the Charity Cup – which Mousehole have won twice in the last four seasons – are Falmouth Town, Godolphin Atlantic, Helston Athletic,  Launceston, Newquay, Penzance and Saltash United, with the quarter-finals due to be played midweek on 26th and 27th November.

Mousehole and Porthleven meet yet again in a month’s time, this time in the League Cup second round on Friday 25th October (7.30pm), Mousehole’s first-ever game under the new floodlights at Trungle Parc.

Mousehole have a chance to complete a two-month unbeaten sequence of games when they return to League action on Saturday (28th) with the trip to Boscawen Park to face St Dennis (3pm).  The Saints are having a disappointing season, lying 18th in the league table with only one win and two draws from their opening nine games, as well as losing their last two matches by big margins – 7-1 at St Blazey in the League Cup at the weekend and 9-3 at Penzance in the Charity Cup yesterday.

Attendance: 96 *The Merlin MS Centre is an independent Cornish charity located in mid-Cornwall in a purpose-built facility providing a comprehensive range of therapies for people whose lives are affected by Multiple Sclerosis and other neurological conditions such as Parkinson’s, Stroke and ME Chronic Fatigue Syndrome.  Contact and further details:  Bradbury House, Hewas Water PL26 7JF, telephone 01726 885530, email hello@merlinmscentre.org.uk, and website www.merlinmscentre.org.uk.