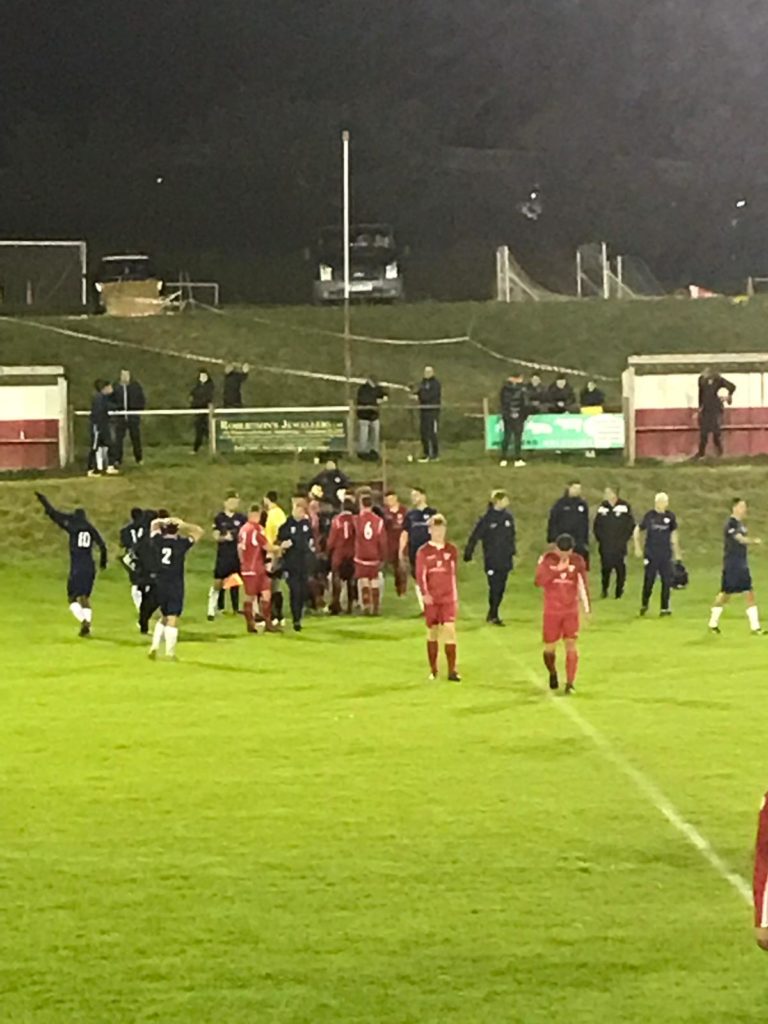 Two weeks previously a below-par Mousehole performance had seen them struggle to gain a very late equaliser in the 2-2 draw against Wadebridge Town in the home league fixture at Trungle Parc.  But in this away League Cup tie against the same opponents on Friday evening, that result was soon forgotten as The Seagulls made amends with a positive and confident display that could easily have produced a double-figure scoreline.

And the win sets up another milestone in the club’s impressive development – a second round tie against Porthleven on Friday 25th October (7.30pm), Mousehole’s first-ever home match under their newly installed floodlights.

Manager Jake Ash made five changes to the starting line-up compared with the 1-1 home draw in the last match against league leaders St Austell, and the team’s dominance indicates the strength of the squad as they took The Seagulls’ unbeaten run to eleven games since the start of the season.

In front of a sparse crowd, with the travelling Seagulls supporters outnumbering the home fans, Rheiss McClean had already driven just past the angle from 18 yards shortly after the start, before he won himself and duly converted a penalty in the 9th minute.

The youngster then sent over an inch-perfect cross in the 12th minute after some keep-ball on the right and centre-back Ben Williams doubled the lead with an unmissable far-post header.

On 18 minutes Steven Ziboth cut in from the left after a surging run and his fierce shot cannoned off the far post before hitting the other post and nestling in keeper Rob Rosevear’s arms.

Unexpectedly, The Bridgers halved the deficit in the 20th minute when a simple forward pass put Kyle Flew in the clear to score past the advancing Corey Harvey.

But straight from the re-start Mousehole restored the two-goal margin with Rheiss McClean sliding the ball home after being put through by Scott Imade’s  incisive pass by between two defenders.

The Seagull’s attacking play continued to threaten the Wadebridge goal, Ziboth and McClean both coming close to adding to the lead before the hosts created a couple of attempts in a good five minute spell.  After this, Mousehole regained the initiative to end the half on top, Rosevear making an important save from Lez Cela on 38 and a last-ditch clearance denying the visitors on 42.

Just four minutes after the interval Lez Cela made it 4-1, beating three defenders with deft movement and footwork outside the box before sending a slide-rule low shot into the far corner.

Back came the home side on 54 minutes and Lewis Prince pulled a goal back with a volley from the edge of the box after an uncleared corner.  Chances continued to be made at the other end, Rheiss McClean miscuing a shot from Ziboth’s cross when a much-deserved hat-trick goal looked likely.

Amara Bakayoko came on as a Mousehole substitute and within 12 minutes had scored one goal and laid on two more. On 74 he whipped a typical left-footed 18-yarder low into the net after some patient passing had created the space for the shot, and four minutes later his fierce drive forced the diving Rosevear to push the shot out, with Kieran Toland first to the loose ball to score.  The same combination made it 7-2 in the 83rd minute, this time Toland meeting Bakayoko’s cross at the far post.

The game ended with the visitors in complete control, Rheiss McClean again close to a treble when Rosevear tipped his 25-yard shot on to the post, and Imani Matthews firing just wide of the upright after Scott Imade had ventured forward from his well-executed holding midfield duties.

In the next week Mousehole have two more away fixtures – at Porthleven on Wednesday 25th (7.30pm) in the first round of the Cornwall Charity Cup, and at St Dennis on Saturday 25th (3pm) in the League.

In a quirk of the fixture list, The Seagulls then have four away league matches in a row, before that significant evening cup tie under lights at the end of the month against Porthleven – the third of four occasions that the two teams face each other this season.