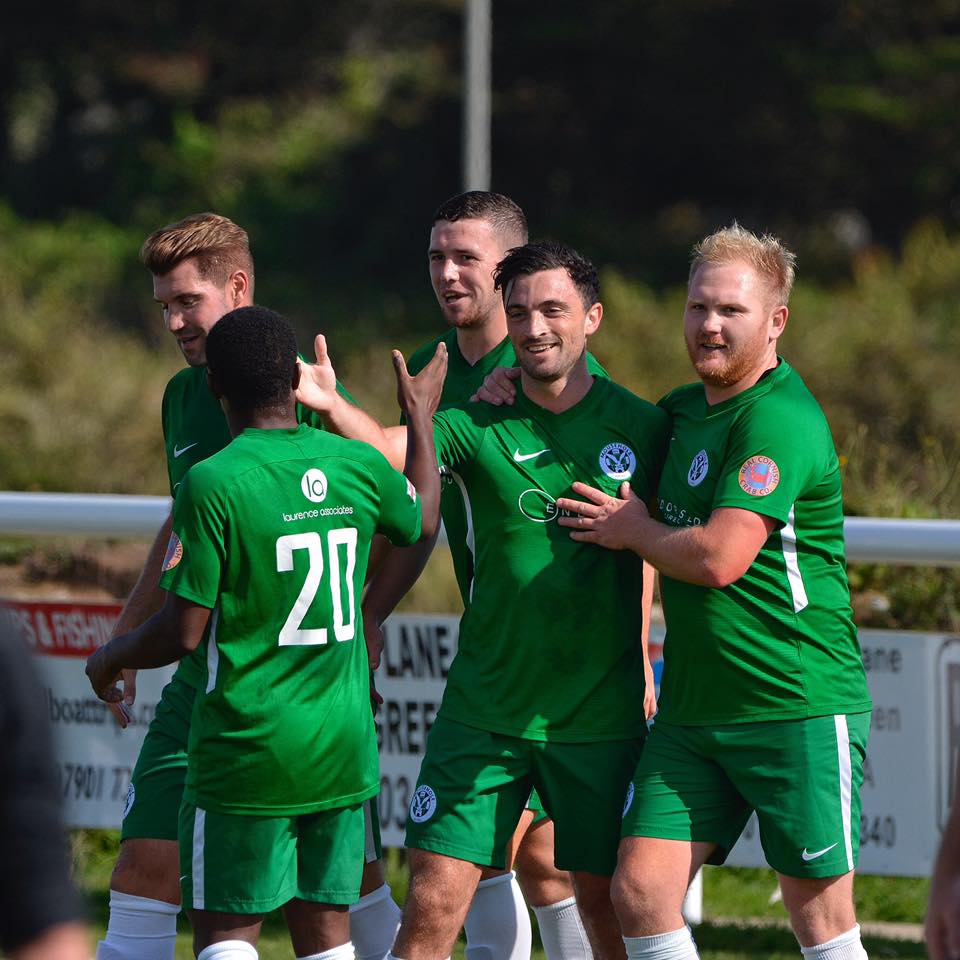 As it turned out, the Lillywhites will have been more than satisfied, and possibly relieved, with an away point from a closely contested encounter in which Mousehole had the better chances and were millimetres away from a famous victory in the closing stages.

On a perfect surface, the game had plenty of goalmouth incident, ebb and flow, and controversy, making for an enthralling 90 minutes, the two sides playing with quality albeit with contrasting styles: overall excellent value for the biggest Trungle Parc crowd of the season on a bright and hot afternoon, and a great advert for Step 6 football in Cornwall.

The draw takes Mousehole’s unbeaten run to ten games since promotion, including four draws each of which might just have resulted in wins.  And this was a case in point, the main issue coming on 81 minutes when a low right wing cross into a busy six yard box was thumped against the underside of the crossbar, rebounding down on to the goal line and bouncing up again, with the officials unmoved by claims the ball had sprung back into play from the roof of the net.

St Austell provided the first real threat as early as the 5th minute, keeper Corey Harvey gathering a dangerous low cross at his near post. The hosts then  suffered a setback on 9 minutes when Mark Richards received a shoulder injury in a midfield tussle, the centre back going off for treatment for six minutes but eventually substituted by Ben Williams just after the half-hour.

Captain Billy Curtis scored his second goal of the season to put Mousehole ahead in the 17th minute, venturing forward from his defensive duties to the centre-forward position to plant a firm header past keeper Jason Chapman’s full-length dive into the corner of the net after a pin-point cross from the right by Lez Cela.

With The Seagulls controlling play, Imani Matthews had a clear chance to double the score just two minutes later, running on to a pass into space down the middle but over-running the ball with only Chapman to beat.

That miss became more relevant on 21 minutes as Dan Perryman drove in an equaliser at the far post following a quick forward break, and on 24 Harry Clarke looked certain to give the visitors the lead after taking the ball round Corey Harvey in another impressive St Austell attack, but Billy Curtis earned his man-of-the-match credentials by heading the shot off the line.

Back came The Seagulls and an evenly-matched half-hour ended with Chapman doing well to tip over Gerens James’ 18-yard effort and a foul on Imani Matthews deemed to be inches outside the penalty area.

The game then swung the Lillywhites’ way with the injured Kieran Toland now off the field for treatment, and in another fast raid a low right-wing cross just evaded two lurking forwards on the edge of the six-yard box.

The last five minutes before the interval saw The Seagulls completely on top, Lez Cela being crowded out as he moved on to Billy Curtis’ penetrating pass into the heart of the visitors’ defence, Gerens James turning on to Amara Bakayoko’s driven cross but firing wide of the near post from close range, the returning Kieran Toland shaving the post with a measured shot from 20 yards with Chapman beaten, and Cela’s shot being pushed out by the busy keeper for a corner from which Toland side-footed against the bar with the ball hacked clear off the line.

The end-to-end action continued early in the second half, Perryman almost putting the Lillywhites ahead in the 48th minute, slotting a shot from 12 yards against the far post with Corey Harvey then in the right place to save the follow-up.  Shortly afterwards Imani Matthews went past three defenders on the left before curving his shot past the post in the 51st minute.  St Austell then had a good five minute spell, Perryman wasting a golden chance with a miscued 30-yard lob over the stranded Harvey but a minute later forcing the keeper into a vital near-post block.

At the other end Amara Bakayoko outpaced the stretched defence with a swift break from St Austell’s own corner in the 65th minute but finished with a weak shot, and on 69 Kieron Toland’s left-footer from 10 yards in a congested area in front of goal cannoned off the unsighted Chapman’s legs.  Gerens James’ shot from Billy Curtis’ cross was deflected into the side netting on 78 and Chapman made an elastic save under his crossbar from Bakayoko’s viciously swerving corner.

Then came the closest incident of all in the 81st minute, and with St Austell not just riding their luck but seeking a late winner Hayden Turner fired over from a very promising position.

Described by the Mousehole faithful as the best game of football seen at Trungle Parc for years, the afternoon also proved that The Seagulls can compete on at least an equal footing with the very best – in this instance, their carefully controlled possession versus St Austell’s quick and direct approach.  And on this form – and with some attention to converting chances – they will earn the right to be regarded as legitimate contenders at the top of the league as the season progresses.

Mousehole now face three away fixtures before the arrival at Trungle Parc on Saturday 5th October of Saltash United – currently the only other unbeaten side in the Division.

Next Friday (20th), The Seagulls travel to Wadebridge Town for a League Cup first round tie, with a 7.30pm kick off.

The following Wednesday (25th) sees the first round of the Cornwall Charity Cup away at Porthleven (7.30pm).

Then it’s a return to league action on Saturday 28th with a visit to St Dennis (3pm).