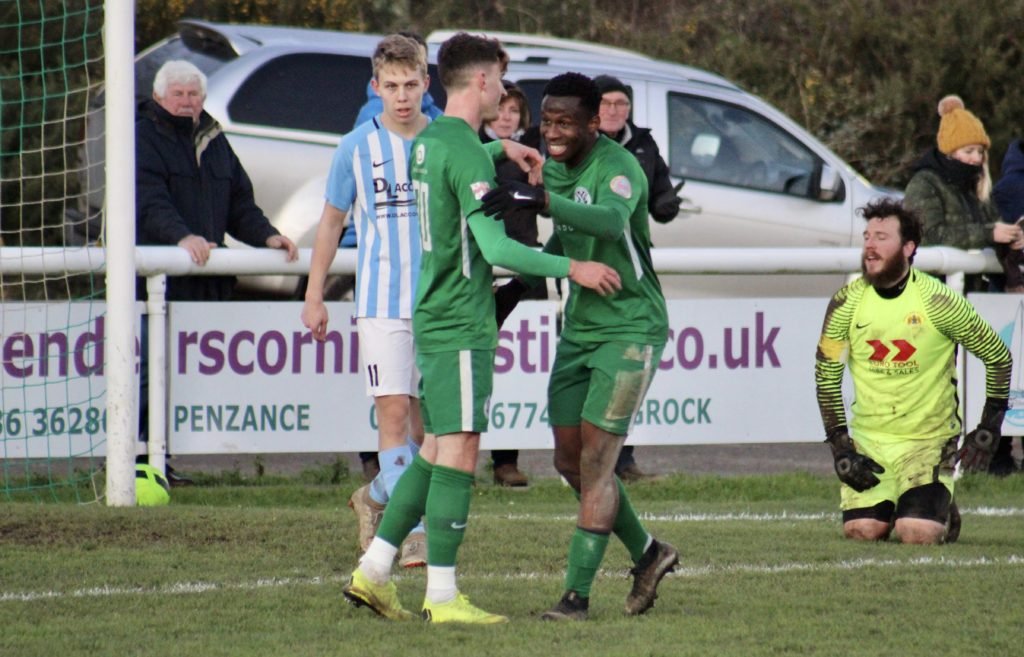 A four-minute hat-trick for Amara Bakayoko, a brace apiece for Glenn Gabriel and Hayden Turner, a rare goal each for defenders Jamie Devine and Billy Curtis, a host of missed chances and a series of goalkeeping heroics by Ethan Fearn – these were the highlights of Saturday’s emphatic win that keeps The Seagulls in third place ahead of Friday evening’s much-anticipated clash with League leaders Heston Athletic.

This was Mousehole’s second double-digit win of the season – the other being a 10-0 win away at Dobwalls in October – and condemned the G-Army, who are relying on several Reserves players as they struggle with First team numbers, to their fourth consecutive defeat with 32 goals conceded, 22 of them at home.

On a bitterly cold but bright sunny afternoon, Mousehole mastered the wet surface well with their customary mixture of short and long passing, movement and speed, using the full width of the pitch and causing the visitors’ defence constant problems on the turn.

Godolphin had just two worthwhile attacks in the match, but did come close when Ben Colquhoun got on the wrong side of Mark Richards in the 6th minute to shoot just wide of the far post, and on 68 minutes Seagulls’ substitute Tom Hands made a great tackle to prevent Joe Stone breaking through with an unexpected dash forward.

Other than that, it was the proverbial ‘one way traffic’ as Mousehole completely dominated proceedings and in a more clinical mood might even have doubled the eventual scoreline.  Ethan Fearn in the Godolphin goal was arguably the man of the match despite letting in ten, producing defiant saves from Billy Curtis on 17 and 74, Amara Bakayoko on 23, 28, 31, 62 and 76,  Rheiss McClean on 29, 67 and 73, Glenn Gabriel on 38 and 41, Tallan Mitchell on 50 and 58, and Hayden Turner on 60.  On top of that, Tallan Mitchell, Amara Bakayoko and Mark Richards all missed the target from close range and several other likely chances were cleared away at the last moment.

Given the balance of play, the G-Army will have been relatively pleased to reach the half-time interval at only three goals in arrears, and then to have got well inside the last ten minutes only 6-0 down, but they were completely overwhelmed in the final stages as the super-fit and hungry Seagulls notched up a further four goals to boost their all-important goal difference.

Glenn Gabriel opened the scoring in the 18th minute with an angled 15-yard shot deflected on to the far post and into the opposite corner of the net.  He then tucked away a simple chance three minutes later after Fearn had pushed away Hayden Turner’s effort on goal.  The same thing happened in the last action before the break, this time Turner quickest to the ball after Rheiss McClean’s shot was partially blocked by the keeper.

It was 4-0 on 59 minutes as Jamie Devine came up from his under-utilised defensive duties to plant an 8-yard header into the roof of the net from Gabriel’s corner.  Five minutes later Tallan Mitchell made it 5-0, beating Fearn for once with a careful side-footed shot after McClean’s threaded pass put him through one-on-one.  Hayden Turner scored the sixth goal – taking his tally to six goals in three matches since joining from St Austell – sprinting in on goal to wrong-foot Fearn with a shot rolled inside the near post. Mousehole’s 100th goal of the season in League and Cup competitions.

Amara Bakayoko then grabbed the headlines with a three-goal salvo in the 85th, 87th and 89th minutes, the first two stroked home after perfect assists by Turner and Gabriel, and the third from the penalty spot following a foul on Turner, who himself was on a hat-trick.  And winger Bakayoko – now with a remarkable 18 goals under his belt – almost got a fourth straight away only for his fierce 15-yard drive to be somehow kept out by Fearn’s foot.  Captain Billy Curtis took the score into double figures in the last minute, claiming his third goal of the season after chesting Tom Hands’ shot into the net in a crowded penalty area.

Mousehole’s next match will be a totally different proposition, as table-topping Helston Athletic visit Trungle Parc on Friday evening (7.30pm).  The Blues have already beaten The Seagulls twice this season – a League win by 3-1 at Kellaway Park in October and a 2-0 success at Trungle Parc in the Cornwall Charity Cup in November.  But, like Helston, Mousehole have suffered only one League defeat, so Jake Ash’s men should need little motivation on the night.  Helston are currently 10 points ahead of Mousehole from the same number of games and recently set a League record for consecutive wins, currently standing at 19.

With a large crowd expected for this floodlit fixture, spectators are asked to arrive early to avoid likely traffic congestion and to follow the directions of stewards on the approach to the ground.