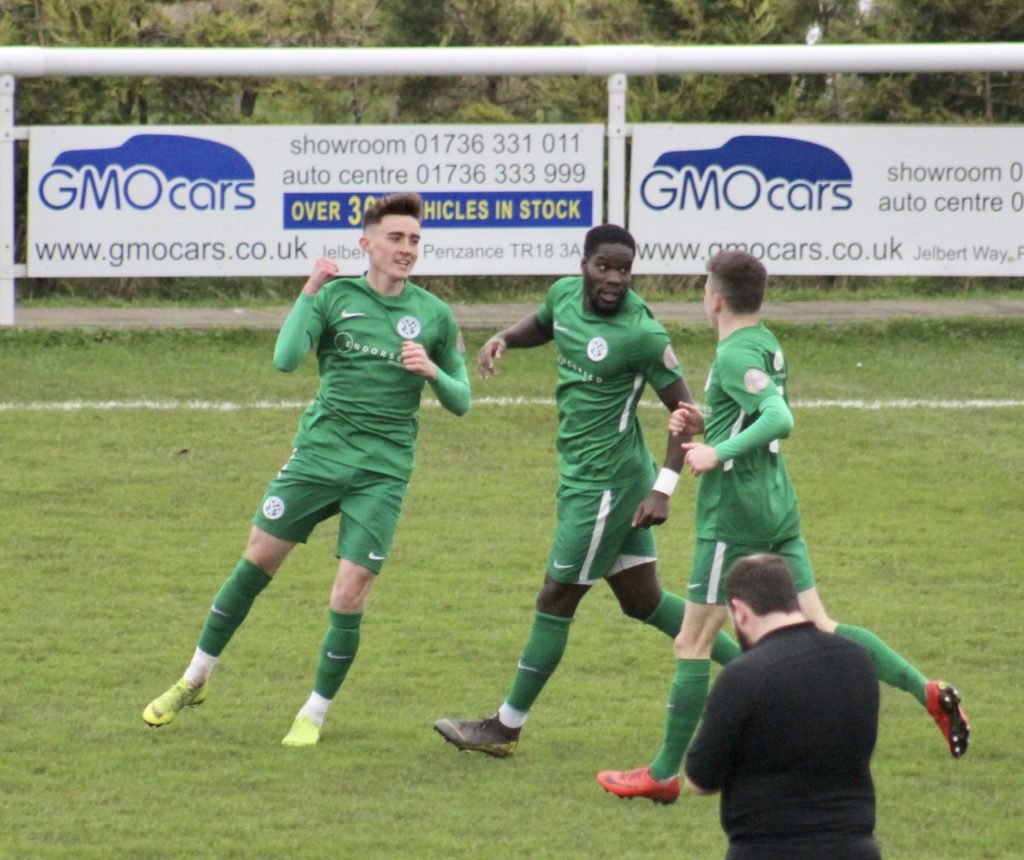 The second half of the league season saw Mousehole retain third place in the table with an efficient rather than spectacular win over St Blazey, which completed a league double after the 4-1 away success in August.

The top four teams also won on Saturday, having between them lost only five games out the 80 played so far.  As the competition for the top two promotion places builds up, Mousehole are definitely in the running, with the fewest games to play against fellow contenders and 10 of the remaining 18 fixtures at home.

On a windy and drab afternoon, the game will be remembered for two clinically sharp finishes by Hayden Turner and an unlucky dismissal for the visiting keeper with the score already 2-0.

Hayden Turner has now scored four times in two appearances since signing from St Austell where he had already netted 22 goals.

St Blazey had lost just once in their last ten games and that form continued as they pressed Mousehole all over the pitch in a hard-working display, and they might have made the contest closer but for a magnificent save by home keeper Cory Harvey in the first half and the failure to make the most of late breakaway chance.

The visitors had the misfortune to be reduced to ten men in the 39th minute when keeper Liam Joyce was unluckily issued with a straight red card, as referee Luke Wilkes applied the ‘letter of the law’ after consulting his assistant.  Joyce came out to catch a lofted through ball held up in the wind at the last moment and ended up marginally outside the penalty area.

St Blazey were fortunate to have substitute keeper Brodie Cole on the bench, and although he was immediately beaten when Paulo Sousa’s free kick came back off the post, he did enough for the rest of the match to keep the scoreline down and give his side a a chance of getting back into the game.

Mousehole opened the scoring in the 8th minute when Amara Bakayoko laid the ball into the path of Hayden Turner 30 yards from goal, and the striker’s control, speed and composure took him through the middle of the visitors’ defence to slot the ball past the advancing Joyce.

At the other end, Cory Harvey made a flying save three minutes later to push round the post Levi Landricombe’s fierce drive that looked destined for the far corner, and on 20 minutes Mark Richards made a great block to deny the Jack Alexander a clear shooting chance from 15 yards.  Landricombe then tested Harvey again with a 25-yard free kick as referee Wilkes was kept busy with the visitors’ successive loud claims for handball.

Mousehole survived the period of pressure and their quick thinking and movement led to a second goal on 32 minutes.  Breaking forward as speed, Tallan Mitchell touched a superbly weighted through ball between the two central defenders for Hayden Turner to win the sprint and roll the ball into the empty net after skipping round the keeper.

St Blazey’s ten men started the second period in determined fashion, coming close with a cross-cum-shot floating past the far post on 50, and Alexander in on goal after dispossessing Jamie Devine on 56 but producing a wayward pass instead of shooting.

Mousehole regained control of the play and in a three minute period Cole was forced to save from Glenn Gabriel and Hayden Turner, and Scott Imade fired wide with the keeper out of position, while St Blazey had one last chance from a breakaway, with Landricombe firing high and wide from a promising position.

In the last minute, Hayden Turner showed his qualities by darting through into space, and after taking the ball round the keeper his shot from a difficult angle avoided the defender on the line but just missed the far post – and a deserved hat-trick.

Mousehole now have three more home league matches in a row, starting with the visit of Godolphin Atlantic this Saturday, kick off 3pm. The Newquay-based strugglers are in a relegation dog-fight with 14 points from 22 games, and have conceded 22 goals without scoring in their last three matches.

Then follows the much-anticipated home game against Helston Athletic on Friday 24th January (7.30pm).  Helston currently lead the table after recording a record-breaking 19 consecutive league wins and are the only side to have beaten Mousehole this season.

On Saturday 1st February, current bottom-of-the-table side Sticker visit Trungle Parc (3pm), before the Cornwall Senior Cup quarter-final tie on Saturday 8th February, with the draw due to be made this Tuesday, 14th January.

Meanwhile, in the SWP (Walter C Parson) League Cup, Mousehole will travel in the quarter-finals on Saturday 29th February to Premier East side Bovey Tracey, who won 6-3 at West division Dobwalls in their delayed third round tie at the weekend.