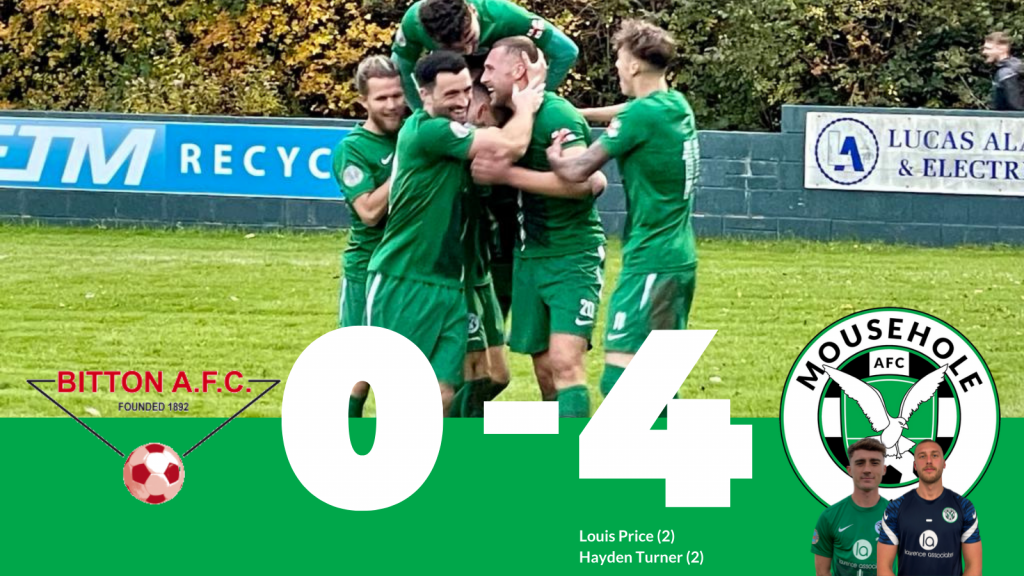 At The Midland Spinner Stadium

Mousehole faced arguably their toughest test of the season away against second-place Bitton, but came away from South Gloucestershire with all three points, an unanswered four goals and a superb whole-team performance

Bitton’s recently re-named ground, located between Bristol and Bath, has been the club’s HQ since its formation in 1892. The first team have been members of the Western League Premier for the last 17 seasons, having been champions once and runners-up twice. They are currently in second place in the League table, with ten wins and just three defeats from the 16 games so far.

Mousehole are ten points behind with three games in hand, having recorded seven wins and four defeats.

The Seagulls are without Callam Mconie, Josh Magin and Andy Elcock for today’s match.  Recent signing Louis Price – who scored a debut goal last Saturday against Cadbury Heath just three minutes after coming on as a substitute – starts on the right side of the attack, while centre back Mark Richards returns after a four-game injury lay-off.

The pitch has a quite a big slope and the surface is soft.  Mousehole will be kicking uphill in the first half, with the low sun behind them

As it happened – the key points of the match

1 minute:  Home goalkeeper Sam Burgess gets to a forward pass ahead of Mark Goldsworthy but injures himself as he boots the ball into touch.  He’s still limping after lengthy physio treatment.

5 minutes: Hayden Turner drives in a goalbound free kick from 25 yards and it’s deflected off the hosts’ defensive wall for a corner

16 minutes:  Bitton’s two wingers Joe Mclennan and Sol Pryce are seeing plenty of the ball but the final delivery is well defended

18 minutes:  GOAL FOR MOUSEHOLE. Josh Otto travels forward with the ball at speed some 50 yards out from the back, feeds Hayden Turner on the left who beats two defenders for pace to the byeline and crosses to the far post where LOUIS PRICE has come in from the right to plant a header into the roof of the net.  Bitton 0-1 Mousehole.  An excellently worked goal.

Halfway through the first half – two contrasting styles on display, Mousehole putting together some smooth passages of play, Bitton more direct and hard-tackling.

29 minutes:  Sol Pryce has a half-chance for Bitton from an angle inside the box but he puts it wide

30 minutes:  Bitton are conceding  a succession of free kicks as they try to nullify The Seagulls’ passing and possession.  Joe Mclennan shows his frustration by crudely hacking down Tallan Mitchell – he may feel relieved to get only a yellow card.

40 minutes:  Undeterred, Tallan Mitchell is back in the thick of the action as Mousehole look to maintain pressure on the hosts’ defence.  Billy Curtis’ long cross just evades Hayden Turner at the far post.

44 minutes:  Hayden Turner’s shot from 18 yards is deflected marginally over the bar

45 minutes:  Bitton force a couple of corners after driving runs by their two wingmen.  Joe Mclennan turns on a clearance on the edge of the box but shoots too high.

45+3 minutes:  Half time.  At the break it’s Bitton 0-1 Mousehole.  Mousehole have shown great style and character to play their way – they fully deserve the lead.  Bitton certainly don’t need to step up the energy levels but will have to find something extra to break through in the second half.

50 minutes:  GOAL FOR MOUSEHOLE.  Tallan Mitchell releases Louis Price on the right, his lofted cross is headed out to HAYDEN TURNER on the left of the box, he brings the ball down and rifles a low right-footer into the net past defenders and ‘keeper.

Bitton 0-2 Mousehole – an early goal was just what The Seagulls needed.

52 minutes:  More attacking by the visitors.  Louis Price comes in from the right and just misses the far angle with a left-foot shot from 15 yards

53 minutes:  GOAL FOR MOUSEHOLE.  Mark Goldsworthy has been keeping the two central defenders fully occupied since the first minute of the game.  This time he dispossesses Sean Keet on the right and slips the ball inside where LOUIS PRICE is in the same position as a minute ago and wastes no time in driving a fierce left-footer into the net.  Bitton 0-3 Mousehole.  Two goals in three minutes.

57 minutes:  The Seagulls are well on top and controlling the game.  Keeper Burgess makes a good full-length save from Hayden Turner’s 20-yard shot

59 minutes:  Louis Price this time goes outside two defenders and tees up Mark Goldsworthy 10 yards out but he can’t quite keep his shot on the turn low enough.

62 minutes:  Louis Price is inches away from a hat-trick as he heads Tallan Mitchell’s deflected 20-yarder just wide

Halfway through the second period:  Mousehole are looking by far the more dangerous in attack, while Ollie Chenoweth in The Seagulls’ goal has had little to do except field crosses, anticipate long balls forward, issue instructions to those in front of him and set up play from the back – all very important!

70 minutes:  Mousehole break quickly from the back, Hayden Turner’s speed takes him past two defenders on the left and he’s felled by a very late tackle after the cross has gone in, earning a yellow card for Ben Withey.

15 minutes to go:  The visitors are enjoying playing down the slope, helped by a comfortable-looking three-goal lead, while the hosts are making little headway except for the mounting number of free kicks they’re conceding as they try to impose their authority

86 minutes:  GOAL FOR MOUSEHOLE.  It’s now 4-0.  Tallan Mitchell breaks forward and slots a perfect ball between the two central defenders for HAYDEN TURNER to take in his stride, outwit his marker and drive right-footed low past Sam Burgess from just inside the area.

90 minutes:  Nearly another – Hayden Turner’s goalbound shot is blocked by some brave defending

90+2 minutes:  Full time – it’s Bitton 0-4 Mousehole (who would have predicted that scoreline?)   A wonderfully positive totally-in-character performance by The Seagulls who bossed the game at the home of one of the promotion favourites.  A great example of ‘attack is the best form of defence’, with the added bonus of a ‘clean sheet’ – their second in four games.  The standard has now been set!

This Saturday, 20th November, 3pm:  Away at Bridgwater United, FA Vase Second Round.  The highest level of national competition ever in the club’s history!  Details of coach travel will be posted online.