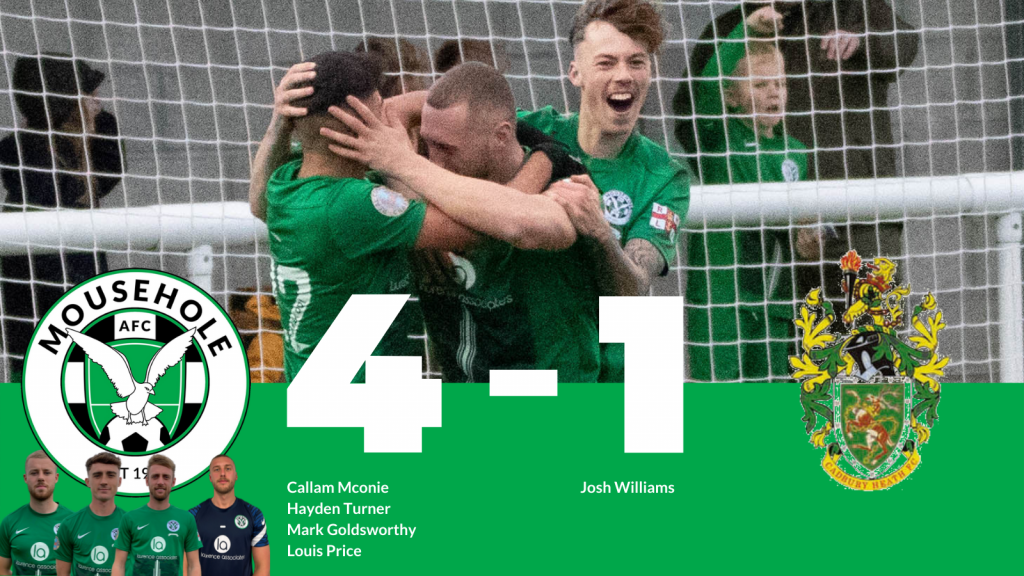 Mousehole eventually overcame Cadbury Heath in a typically tough and incident-packed Western League encounter, extending their recent good form to three wins and a draw from the last four games, and at the same time completing their second ‘double’ of the season.

Mousehole and Cadbury Heath are at the two extremes of the area covered by the WLP, with a round trip of nearly 430 miles.  The Seagulls won 3-1 at The Heath in September, the goals coming from Josh Magin, Tallan Mitchell and Callam Mconie, with understudy goalkeeper Ethan Elwell saving a late penalty.  So today, it’s a chance to achieve another League ‘double’, following the wins against Millbrook earlier in the season.

The match – as it happened:

10 minutes:  It’s been a fast and positive opening by both sides

12 minutes:  GOAL FOR CADBURY HEATH.  JOSH WILLIAMS gives the visitors the lead with a cool one-on-one finish from 10 yards after a Mousehole mistake on the ball opens up a big space on the edge of the box

15 minutes:  The Heath are pressing with purpose, breaking up Mousehole’s pattern of play and forcing some uncharacteristically hasty clearances at the back

16 minutes:  Having said that, the visitors are conceding quite a few free-kicks with their over-eager and sometimes clumsy challenges.  Assistant Player-Manager Matt Huxley gets a yellow card for his third foul in quick succession. Hayden Turner drives in the 20-yard free kick and keeper Jordan Schofield makes a flying save to touch it onto the bar and over.

17 minutes:  Another close one.  Callam Mconie swings in a cross from the left and Billy Curtis is in loads of space six yards out but can’t direct his header on target.

30 minutes:  GOAL FOR MOUSEHOLE.  It’s been tough and scrappy, and from yet another foul as Mark Goldsworthy turns the defender 20 yards out, Hayden Turner fires in a fierce free-kick, Schofield can only parry it and CALLAM MCONIE heads in the equaliser from six yards.

33 minutes:  Mark Goldsworthy is clean through to the right of goal but hits the keeper’s legs with his shot

35 minutes:  Jordan Schofield is busy again for the visitors as he scuffs Callam Mconie’s low near-post cross into the side netting

39 minutes:  GOAL FOR MOUSEHOLE.  HAYDEN TURNER comes in from the left to aim a right-footed goalbound cross-shot from 20 yards, the ball skimming off the top of the head of captain Ashley Kendall into the net.  Mousehole 2-1 Cadbury Heath.

42 minutes:  Good chance for Cadbury Heath.  Josh Williams swerves a long cross from the left towards the far post, where the unmarked Dan Winstone heads down but wide

43 minutes:  Penalty for Mousehole.  Facing away from goal just inside the box and shielding the ball, Tallan Mitchell is needlessly bundled over.  Hayden Turner steps up, looking to make amends for his saved penalty against Clevedon – this time he hammers the spot-kick wide

45 minutes:  Tallan Mitchell puts Callam Mconie through for a typical left-foot shot but it misses the near post

45+2 minutes:  Cadbury Heath’s central defender Ewan McMillan gets on the end of a floated free-kick and plants a firm header towards the far top corner, well anticipated by Ollie Chenoweth in the home goal

45+3 minutes:  Half-time.  Mousehole 2-1 Cadbury Heath.  The hard-working visitors have made it a tough challenge so far.  The hosts got going eventually and deserve to have the lead, albeit a slender one.

47 minutes:  Close to a Heath equaliser.  They again press and win a corner, which ricochets around the six-yard box and Matt Huxley’s attempt is cleared off the line.

54 minutes:  Hayden Turner continues to threaten danger for the visitors’ defence, this time shooting just too high from 25 yards.

57 minutes:  Sending-off for Cadbury Heath.  Matt Huxley fells Billy Curtis on the halfway line with a crunching late tackle for an inevitable yellow-card offence –  and it’s his second of the match, so his side will play the last half hour with ten men.

61 minutes:  GOAL FOR MOUSEHOLE.  Superb play by Paulo Sousa on the left releases Hayden Turner for a 50/50 race with keeper Schofield, the ball runs loose and MARK GOLDSWORTHY calmly strokes it first time between two defenders and into the unguarded net from outside the area. Now 3-1.

65 minutes: Mousehole substitute – Mark Goldsworthy is replaced by Louis Price, with the ex-Newquay man on the left and Hayden Turner going more central

68 minutes:  GOAL FOR MOUSEHOLE.  LOUIS PRICE quickly makes his mark – he’s been on the field for just under three minutes.  Hayden Turner lofts a long cross from the right to the far side of goal where Paulo Sousa has raced into space to volley the ball inside and the new signing stabs the ball home despite the close attentions of two defenders.  A wonderful goal involving precision, speed, movement, control and predatory instincts.  Mousehole 4-1 Cadbury Heath.  Hayden Turner has scored one goal and provided assists for all the other three.

82 minutes:  Mousehole substitute – Callam Mconie is replaced by Kyle Fraser on the left, with Louis Price moving to the right

90+2 minutes:  The visitors do well to scoop the ball off the line as relentless Mousehole exploit the space against the tiring ten men.

90+3 minutes: Full-time – Mousehole 4-1 Cadbury Heath.  Despite the comfortable-looking scoreline, no match in the WLP is easy, but Mousehole are getting to grips with the challenges they now face.  In their first season at this level, they stand 11th in the table, having played the fewest games (13) of all the teams in the Division.

Next fixtures for Mousehole: