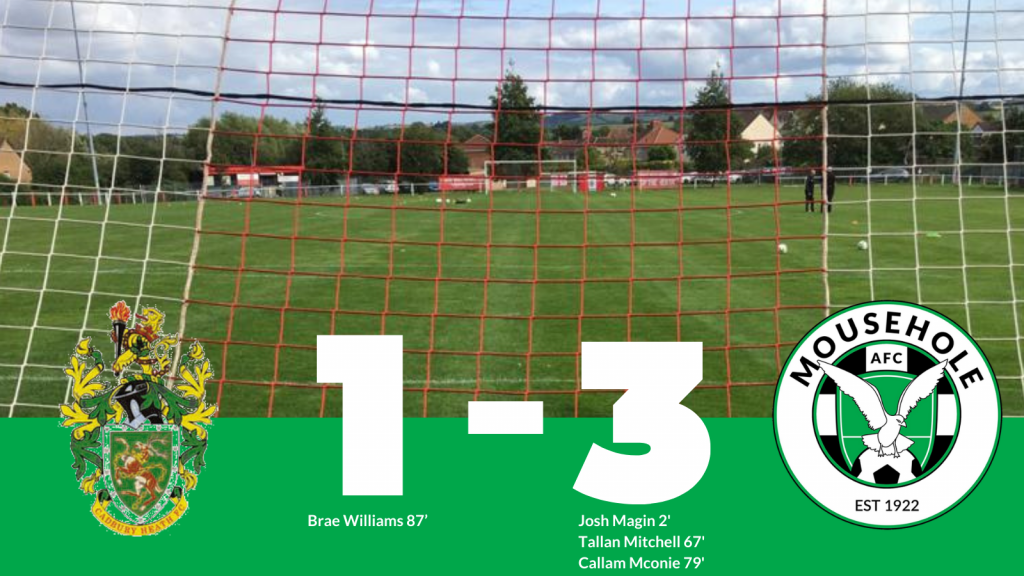 The Seagulls enjoyed a satisfying day out with a well-earned win against experienced Western League side Cadbury Heath on their longest away trip of the season to the far eastern outskirts of Bristol.

Cadbury Heath, affiliated to Gloucestershire FA,  have been an established, though mostly lower half of the table, WLP side for 10 years

Their record this season is just 5 points from 11 games, with a home win against Street, and home and away draws against Clevedon Town

The Seagulls have travelled without goalkeeper Cory Harvey (ill) and Josh Otto (injured), but have a full complement of five substitutes including new signings Jacob Grange and Connor Leak-Blunt, while understudy keeper Ethan Elwell makes his debut.

The match as it happened

1 minute:   Matt Huxley fires in a low shot for The Heath after an interception, but Ethan Elwell gets down quickly to make the save

2 minutes:  GOAL FOR MOUSEHOLE – Hayden Turner makes a trademark run down the left and his low cross is sidefooted home from eight yards by JOSH MAGIN coming in from the opposite flank at just the right moment.  Cadbury Heath 0-1 Mousehole.

6 minutes: Tallan Mitchell sends in a volley from the edge of the box after a long Hayden Turner throw, but home keeper Jordan Schofield is well positioned to save

14 minutes: A half chance for the hosts as giant striker Octavian Gala heads down a cross and Matt Huxley volleys over from a difficult angle

16 minutes: Sean Roberts breaks through the Heath’s midfield and feeds Mark Goldsworthy in space on the right – his pull-back finds Tallan Mitchell to shoot from 20 yards, but it’s too high

21 minutes: Paulo Sousa is up with the next Seagulls’ attack, his cross from the left hitting the near post and going out

24 minutes:  Cadbury Heath’s tall men are looking to gain advantage from lofted passes – this time they have a ‘goal’ from a corner disallowed for a push

29 minutes:  A big chance for 2-0 as Mark Goldsworthy is put through one-on-one but he can’t get the ball past the keeper’s outstretched leg

30 minutes:  Mousehole have created the better chances in the first half hour, though Cadbury Heath are by no means out of it

31 minutes: Mousehole substitute – Callam Mconie replaces Hayden Turner who has a back injury

35 minutes:  Ten minutes to go to half time and this hard-working Heath side are upping the tempo

43 minutes: Close again for the home side as a cross-shot from the left is deflected past the far post

45+3 minutes: The half time whistle ends a somewhat scrappy half between two sides with markedly different styles.  The hosts have finished the half well and will no doubt exploit the slope and breeze after the interval.

60 minutes:  Cadbury Heath are up for this.  They’ve had a couple of dangerous free kicks and corners, and Josh Williams, a big strong man with a remarkably good touch, has driven a volley just over the bar from an angle on the edge of the box.  Mousehole are going to have to ’dig in’ and earn the right to play their way.

67 minutes:  GOAL FOR MOUSEHOLE.  The Seagulls have been gradually getting back into passing mode.  TALLAN MITCHELL is involved in some clever interplay 30 yards out from the home goal and has enough space and time to stroke a left-footer from 18 yards low into the corner past the keeper’s dive.  Cadbury Heath 0-2 Mousehole, and a bit of relief in the visiting camp!

69 minutes:  A fluent move enables Josh Magin to shoot and Jordan Schofield dives full length to push it out for a corner

70 minutes:  Jamie Devine superbly heads a far post cross back in front of goal where Mark Goldsworthy nets, but it’s offside, not 0-3.

72 minutes: At the other end The Heath have a ‘goal’ disallowed for a foul

74 minutes:  Mousehole close to a third goal.  Keeper Schofield and Josh Magin contest a pass through the middle, the ball runs free and Tallan Mitchell lobs over from 35 yards

79 minutes:  GOAL FOR MOUSEHOLE.  It’s been coming.  Josh Magin again causes problems for the home defence with a low cross – it’s scuffed away under pressure and CALLAM MCONIE picks up the loose ball, turns and hammers it into the roof of the net with his right foot from eight yards.  Cadbury Heath 0-3 Mousehole, and more breathing space.

80 minutes:  Mousehole substitute – the scorer Callam Mconie is replaced by Connor Leak-Blunt on the left

82 minutes:  Mousehole keeper Ethan Elwell is alert to a Heath through ball and races out bravely to claim it

84 minutes:  Dramatic moment!  Jamie Devine clears an awkwardly bouncing pass forward into The Seagulls’ penalty area, but the assistant referee flags for hand ball, and despite the protests it’s a penalty.  Junathain Walker now with a great chance set up his side’s expected rousing finish to the match…….debutant keeper Ethan Elwell dives to his left to pull off a magnificent save, pushing the powerful spot kick up and over the bar.

87 minutes:  GOAL FOR CADBURY HEATH.  The hosts get a goal back for 1-3 as substitute Brae Williams’ shot from 20 yards goes in just under the bar.  How important, now, was that penalty save a couple of minutes ago?

88 minutes:  Yet another disallowed ‘goal’ as Tallan Mitchell is caught offside

90 minutes:  Cadbury Heath nearly profit from their aerial tactics as centre back Joe Smith heads wide from a corner

90+3 minutes:  Full time Cadbury Heath 1-3 Mousehole.  Now two wins in a row for The Seagulls and a first win of the season against an established Western League side.

Street have won 3, drawn 1 and lost 6 games in the League so far.  They have the same points tally (10) as Mousehole but have played three games more.

In the FAV1QR, Shelton Mallet won away at Exmouth Town 1-0, while Mousehole had a bye. Supporters’ seats will be available on the coach – details will be announced later