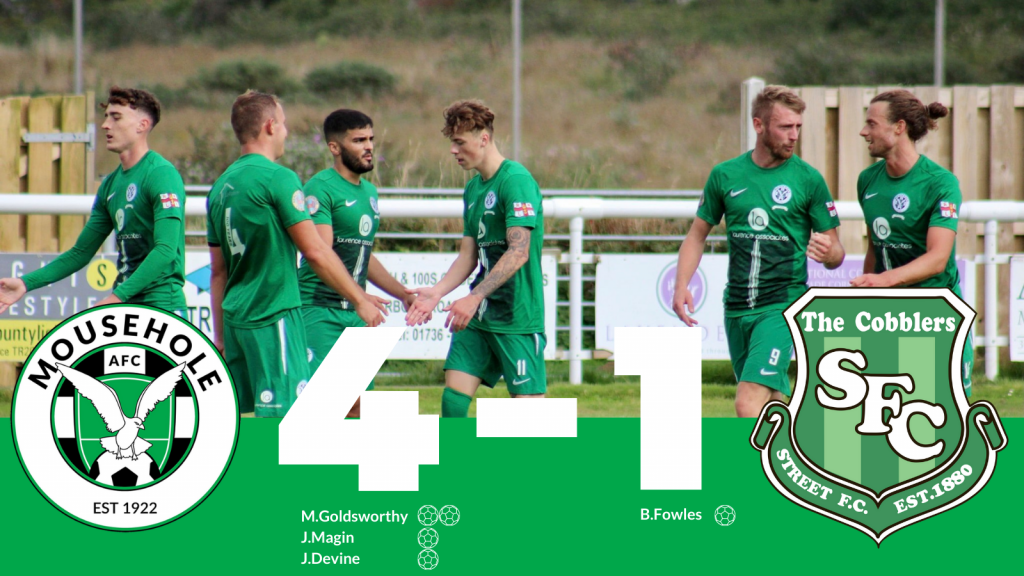 Mousehole’s last two matches have been a 5-1 home win against fellow-promoted Millbrook, followed by a 3-1 away success last Saturday at established Western League side Cadbury Heath

Today’s visitors – nicknamed The Cobblers after the local shoe-making industry- are also long-serving members of the WL, joining first in 1911, and were champions as recently as 2017/18, spending one season in the Southern League before opting for voluntary demotion.  Nowadays the Somerset club’s strategy centres on developing young local talent.

Mousehole are without the unavailable Steve Burt and Sean Roberts, while recent arrival Connor Leak-Blunt starts in midfield.

It’s an eye-catching spectacle as the two teams appear on the pitch in bright sunshine, The Seagulls in their customary dark green and Street in their change strip of canary yellow (they are the only other WLP team whose club colours are green), while Cory Harvey is in an all-orange keeper’s kit and his opposite number Harley Wilkinson in a shade of all-violet.

First half: Mousehole are facing the Cricket Club end

10 minutes:  Play is scrappy as both sides are guilty of sloppy passing in the opening stages

11 minutes:  GOAL FOR MOUSEHOLE. Suddenly, a chance is crafted for MARK GOLDSWORTHY as he’s put through one-on-one with the keeper and strokes the ball home from 25 yards

15 minutes:  A misplaced pass gives The Cobblers a chance to break forward from midway in the own half, but the well-positioned Harry Foster heads over a pinpoint cross from the right

25 minutes:  Another chance for the visitors as Anele Ncube heads down a lofted free-kick into the area and Ben Fowles drives a first-time volley over the bar from the edge of the box

35 minutes:  GOAL FOR MOUSEHOLE.  Hayden Turner makes another surging run down the left and his low cross is touched in from six yards by JOSH MAGIN who’s come in from the right – a replica of the first goal at Cadbury heath last Saturday.  Mousehole 2-0 Street.

39 minutes:  Nearly a third goal.  Mousehole are making inroads in the left channel: a low cross towards the near post finds Mark Goldsworthy who spins and shoots, but keeper Harley Wilkinson turns it out for a corner

40 minutes:  GOAL FOR MOUSEHOLE.  A low corner comes in from the left towards the near post where MARK GOLDSWORTHY flicks it over the line, with two green-shirted colleagues eagerly bundling it into the net

45+2:  At half time it’s Mousehole 3-0 Street, a comfortable-looking scoreline after an indifferent start – but despite the visitors having a good share of possession, Cory Harvey has been untroubled in the home goal, compared with the busy Harley Wilkinson

47 minutes:  New boy Connor Leak-Blunt brings the ball quickly forward and sets up Hayden Turner for a shot – but it’s straight at the keeper

48 minutes:  A poor pass gives Ben Fowles a sight of goal and Cory Harvey makes his first real save of the match

49 minutes:  Street are undeterred by the scoreline – they break at pace down the right and Harry Foster plants a far-post header onto the roof of the net

70 minutes:  An incident-packed few seconds!  Street defenders do superbly well to clear the ball off the line twice in the same Mousehole attack.  The ball goes down the other end where it’s a GOAL FOR STREET – Ben Fowles marks an industrious and energetic display by coolly slotting home an accurate low shot from 15 yards. Mousehole 3-1 Street.  The Cobblers want to get on with it – will the game now get stretched?

72 minutes:  Mousehole looking to make the game safe – Callam Mconie drives low from an angle, Harley Wilkinson parries the ball onto a defender and it squirms over the bar with the goal gaping.

73 minutes:  GOAL FOR MOUSEHOLE.  Keeper Wilkinson is for once caught out by a swirling right-sided corner, leaving JAMIE DEVINE to head into the net from close in.  Mousehole 4-1 Street.

84 minutes: Street are taking the game to Mousehole, who now seem to be in relaxed mode.  A left-wing burst and a dangerous low cross requires the alert Mark Richards to clear the ball away at the near post

85 minutes:  And again.  A quickly taken short corner sees the ball curl past the far post

86 minutes:  A goalbound shot is blocked inside the area as the home side are pegged back

90+2 minutes:  The last action of the match as, fittingly, it’s Street’s Ben Fowles going for goal, but his 18-yard shot is too high.

Full-time:  Mousehole 4-1 Street.  Good entertainment, with both teams trying to play an attractive style of football.  Job done and a good nine-points-out-of- nine sequence for The Seagulls.  Credit to Street for a positive performance in the second half, which they “drew” 1-1.