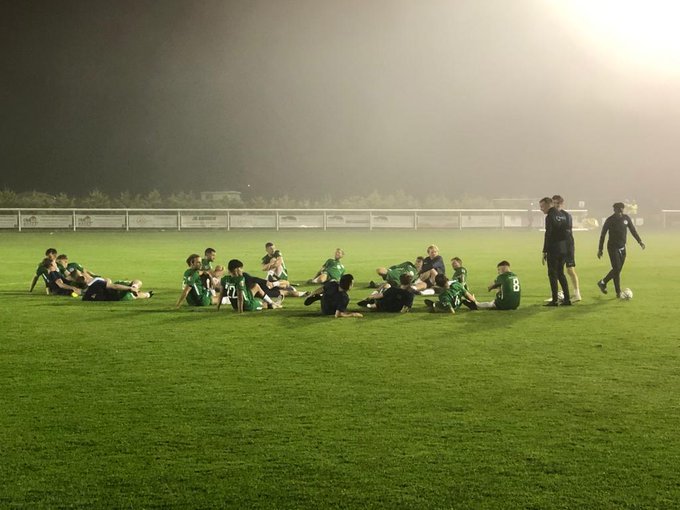 In the immediate aftermath, Referee Paul Kempen issued a straight red card for a reckless challenge by the striker, followed by a further 30 minutes’ on-pitch attention to the prostrate ‘keeper while awaiting an ambulance.

Despite Helston vehemently protesting the sending off and pressing for an early resumption to play, the Referee, with the support and advice of Cornwall FA Assessor Steve Lawrence, took his time to assess the situation and, with player health and safety the priority, called the match off at 9.15pm.

2mins, CLOSE for Helston:  Billy Tucker’s 20-yard left-footer hits the top of the bar and goes over.

16mins, CLOSE for Mousehole:  Jude Boyd makes a great run to the byeline but his cut back is fired wide by Hayden Turner from eight yards.

Half-time score 0-0:  A fast and fiercely competitive half, with Mousehole having more of the ball but Helston looking threatening in quick breaks.

52mins, GOAL for Helston:  Two uncharacteristic mistakes at the back give Mark Goldsworthy the chance to drive home with a low shot from 15 yards

65mins, INJURY:  Helston’s Matt Buchan sprints alongside Mousehole captain Billy Curtis after a long bouncing pass through the middle.  Keeper Cory Harvey comes out at speed to jump high to claim the ball. Buchan pushes Curtis into Harvey, who is left injured and motionless on the turf.

67mins, RED CARD for Helston’s Matt Buchan for the challenge.

Play is held up for 30 minutes, whereupon the Referee abandons the match.

The ambulance arrives later and takes Harvey to hospital, with the diagnosis not as serious as originally thought, and the popular ‘keeper returns home in the early hours of Wednesday – his birthday!