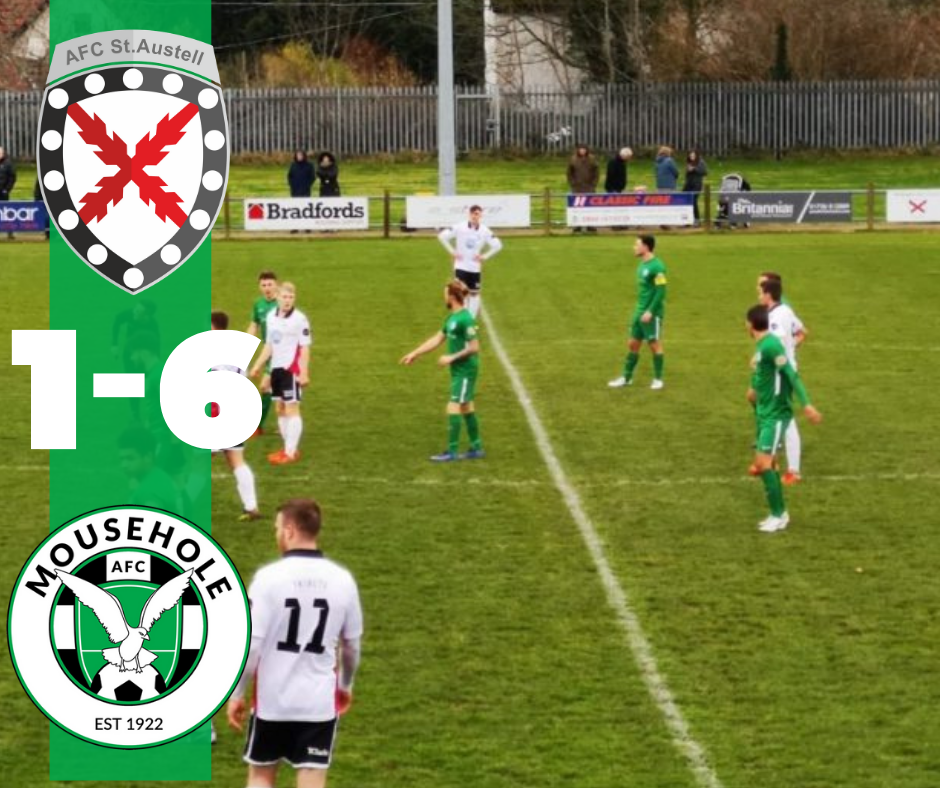 Table-topping Mousehole followed up their 7-0 win at Launceston and 3-0 home success against Porthleven by sweeping aside a young St Austell side with a dominant performance that might well have produced a double-figure scoreline.

1min, GOAL to St Austell:  An unforced error on the edge of the penalty area presents Chris Kilbey with a gift, and he side-foots into an unguarded net from 20 yards.

7mins, GOAL to Mousehole:  Tallan Mitchell brings down a lofted forward pass with superb control and lobs over keeper Jason Chapman from 15 yards for an early equaliser.

12mins, GOAL, St Austell 1-2 Mousehole:  Hayden Turner scores against his former club to put The Seagulls in the lead, turning to shoot home from 8 yards after Kieran Toland’s cross-shot is blocked in front of goal.

25mins, GOAL, St Austell 1-3 Mousehole:  Hayden Turner scores from the penalty spot after Tallan Mitchell’s twisting run into the area is halted with a foul.

37mins, GOAL, St Austell 1-4 Mousehole:  Amara Bakayoko breaks up a St Austell attack by pressing and winning the ball midway in his own half, skips past the defender on the halfway line and ends a 70-yard sprint with a fierce left-foot drive into the corner of the net.

44mins, GOAL, St Austell 1-5 Mousehole:  The Seagulls show no let-up in their attacking intentions but have a touch of luck on their side as Tallan Mitchell’s 25-yard right-footed attempt bounces awkwardly past Chapman.

66mins, SUBSTITUTE for Mousehole:  Billy Curtis is replaced by Josh Otto, with Kieran Toland taking over the captain’s armband.

The Seagulls’ 100% record from their first three matches, with 16 goals scored and 1 conceded, leaves them as league leaders, sharing the nine points with Dobwalls.

The next week provides a stern test, with the visit of Helston Athletic (Trungle Parc, Tuesday 15th September, 7.30pm), followed by the away trip to Western League Premier side Exmouth Town for Mousehole’s first- ever game in the national FA Vase competition (Southern Road EX8 3EE, Saturday 19th September, 3pm).