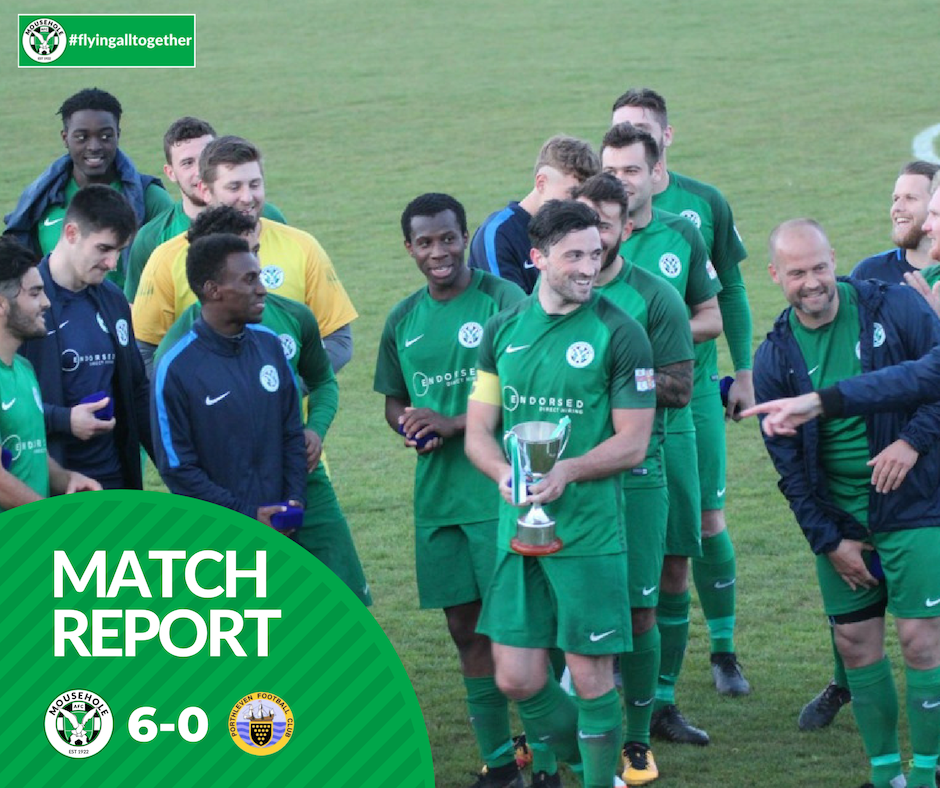 SEAGULLS FINISH THE SEASON WITH STYLISH PERFORMANCE AND IMPRESSIVE STATISTICS

Mousehole’s memorable 2018/19 campaign ended with a superlative exhibition of football on a beautiful sunny evening against Porthleven.

The Seagulls – already confirmed as League runners-up – were up against the third-placed Fishermen, who had won the floodlit encounter 3-2 at Gala Parc in early September, so a tight return contest might have been expected.

But the hosts banished those thoughts as they went about their business with a brisk sense of purpose, scoring two goals at the start and going 6-0 ahead just after the hour.  Lez Cela, Gerens James and Kieron Toland scored two goals each, but as in recent months this was an accomplished whole-team effort.  Nevertheless, the season’s stats highlight two individuals’ performances – captain Billy Curtis who has played every minute of every match, and Gerens James who took his overall tally to 42 goals.

The result means that Kevin Nicholson’s side finished the League season with an excellent 13 wins in a row, an amazing record since 1st January of 64 goals scored and only 5 conceded, just one League defeat since the ex-Torquay United man took over as player-manager in October, and overall the highest number of goals scored (106) and the meanest defence (21) in the Division.

Lez Cela opened the scoring after 5 minutes, taking a clever pass by Kieron Toland and firing in a shot only half-stopped by keeper Ethan Fern.  Amara Bakayoko was then denied by a great save by Fern after 8 minutes, and Josh Sims made a brilliant goal-line clearance from a lob by Toland.  But a second goal always looked likely and it was Gerens James who slotted home in the 12th minute when Hamza Kaid and Toland teed up the chance with skilful work on the left.

Kevin Nicholson’s 20 yard free kick was pushed out at the far post by Fern on 14 minutes, and two minutes later centre back Jerry Gyebi’s nimble footwork created enough space 15 yards out to curl a shot just wide.  Porthleven were looking to play on the break but their passing was too hurried.  They paid the penalty on 23 minutes after losing possession high up the field, leaving Hamza Kaid to release Toland with a quick accurate long pass into space, and the energetic Scot took the ball 50 yards out, shrugged off the covering defender and drove into the far corner to end a deadly counter-attack.

A minute later Toland’s deflected close range shot hit the crossbar and Fern was soon in action again with diving saves from Kaid, Bakayoko and Cela, before Gerens James made it 4-0 in the 36th minute, Nicholson and Cela carving out the chance on the left for a sidefoot finish.  The Seagulls’ striker was then denied a first half hat-trick as the busy Fern pushed his effort against the post just before the interval.

After James had headed over a clear chance from Bakayoko’s cross on 50, Porthleven put the home defence under a brief period of pressure, with danger-man Tornado Bello forcing Jason Robertson into an important save.  But Mousehole then scored another two goals in three minutes to confirm their overall superiority.  Lez Cela brought the ball in from the left against a retreating defence to rifle in an angled low shot from 8 yards in the 59th minute, and Kieron Toland stole the ball on the right hand side of The Fishermen’s penalty area to drive home for 6-0.

Gerens James was close to his sixth hat-trick of the season from Kaid’s low cross after 75 minutes, but Porthleven were involved in an interesting last five minutes at the other end, Robertson saving from Bello again, Rob Carey putting an unopposed chance over the bar from six yards, and Bello hitting the post with his penalty kick after being tripped on another incisive run.  And to complete Porthleven’s frustrating evening, Rob Carey was sent off for a second yellow card for dissent a short time before the final whistle.

After the final whistle, Mike Pett, vice chairman of the League Board, presented the Mousehole players with the runners-up trophy and individual medals.  Phil Hiscox, League Secretary, commended the club on its continuous improvement off the field brought about by the work of the many volunteers behind the scenes, and the players in particular on an “phenomenal” second half of the season.  He went on to wish both Mousehole and visitors Porthleven, who had sportingly stayed on the field during the presentation, the best of fortunes in the new Step 6 League next season.