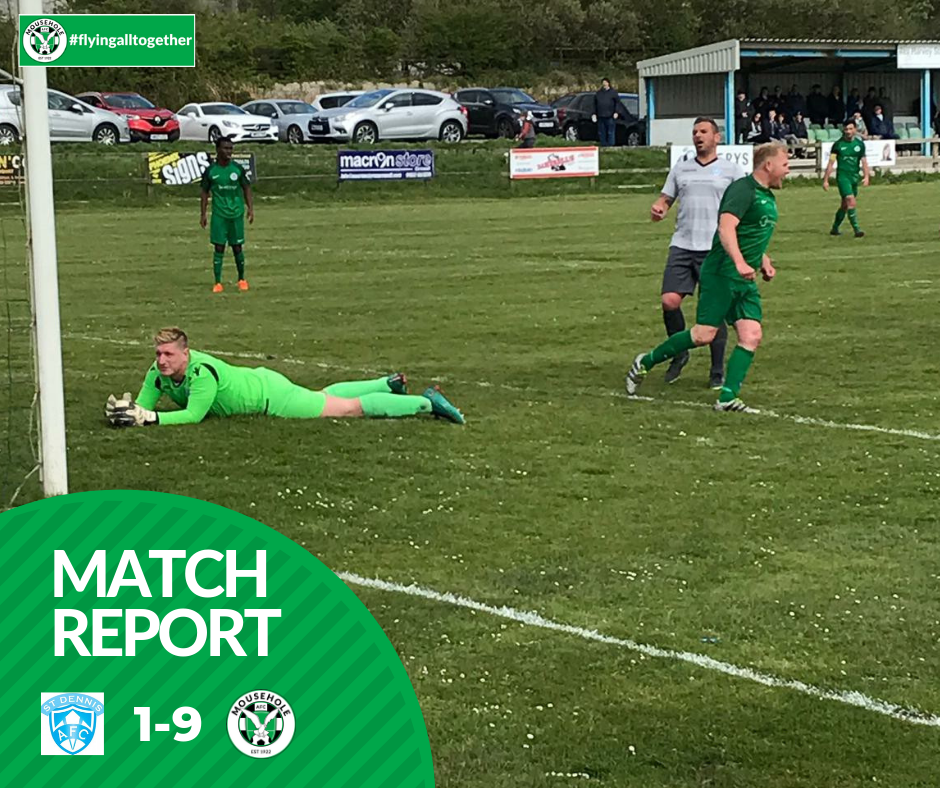 Far from being one of those uncompetitive, meaningless end-of-season fixtures, this was an occasion in which Mousehole used their last away game to showcase with devastating effect the quality of their passing and firepower against a Saints side starting with the incentive to win for a fourth place finish.

This was the tenth match of the campaign – more than a third of their League games – in which The Seagulls have scored five or more goals, and on this occasion there were seven different scorers and a number of notable ‘firsts’, with winger Amara Bakayoko notching a hat-trick and captain Billy Curtis, player-manager Kevin Nicholson and substitute Sam Shulberg each getting off the mark for the season.

On a bright but windy afternoon, Mousehole had already signalled their attacking intentions before Hamza Kaid looped a header inside the far post in the 9th minute.  Amara Bakayoko added a second goal on 12 minutes, getting a close-range touch after Kieron Toland’s fine 15 yard shot had hit the post.

As the one-way traffic continued, Kevin Nicholson struck a sweet left-footed free kick from 20 yards high into the far corner for 3-0.  And two minutes before the interval Bakayoko raced forward from the halfway line to shoot low into the net for a fourth goal.  In between the goals, Gerens James came close on several occasions, Toland drove just wide from the edge of the box, and Bakayoko had a cross-shot cleared off the line.

St Dennis’ first serious attack came on 39 minutes when a goalbound shot was unintentionally blocked by a home player, and immediately before half time a free kick delivered towards a crowded six-yard box skidded off the top of a defender’s head for an own goal to give the hosts a glimmer of hope at 4-1.

With the wind in their favour, The Saints created a couple of half-chances in their best period of the match in the first ten minutes of the second half.  But at the other end, goalkeeper Ryan Holland was still kept busy, foiling Kaid, Bakayoko, and Lez Cela in quick succession, and shortly after Kaid had missed the target with a clear sight of goal, Gerens James at last got on the scoresheet to make it    5-1 after 68 minutes, converting into the roof of the net from a few yards out after Toland twice had shots blocked.

Bakayoko made it 6-1 with a hat-trick goal on 72, arrowing a trademark left-footed low shot in from 15 yards after St Dennis’ defence had been pulled apart by swift passing across the pitch.  Two minutes later Mousehole’s supporters were celebrating a rare goal by popular captain Billy Curtis – who has played every minute of every match this season – as he clipped a left-footed shot into the net from just inside the area after Bakayoko’s drive rebounded off the post.

Mousehole were now creating chances galore, with a double-digit scoreline looking possible, but, much to the relief of the hosts, just two more goals were to come.  Substitute Sam Shulberg was in the right place to tap over the line after the overworked Holland had saved James’ shot with his feet after 86 minutes, and in the next attack Lez Cela scored his side’s 100th League goal of the season with a carefully placed sidefoot inside the post after yet another assist by Bakayoko.

Already confirmed as runners-up, Mousehole’s demolition of St Dennis was their 12th League win in a row since the beginning of January, with 58 goals scored and only 5 conceded.  As the highest scorers in the Division with the meanest defence, and so far with just three defeats, The Seagulls’ overall record would in most seasons have been enough to win the League – but for Liskeard Athletic’s impressive title-winning campaign during which they have lost only once.

Mousehole have one remaining fixture, this Wednesday (1st May, 6.45 kick off) at Trungle Parc against local rivals Porthleven, who have confirmed a third place finish, but were somewhat fortunate to inflict The Seagulls’ first defeat of the season, 3-2 at Gala Parc in early September.