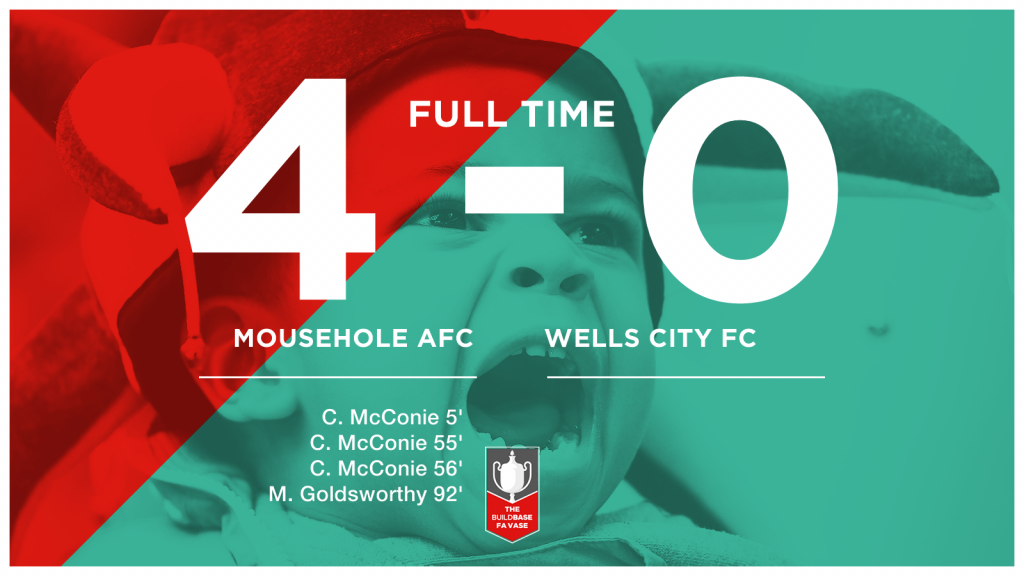 Western League Premier Division Mousehole progressed to the next round of the FA Vase with victory over Division One Wells City at a windswept Trungle Parc, thanks to a strong second half performance and a hat-trick by winger Callam Mconie.

Wells City are an established Western League club, having been something of a “yo-yo” outfit between Premier Division and Division One in recent years

Currently they are 10th in Division One, with 5 wins, 5 draws and three defeats, although – importantly – they are unbeaten in their last seven games in all competitions.

Mousehole reached this stage of the FA Vase with a 1-0 win away at Wells’ near neighbours Shepton Mallet of the WLP, whereas Wells City had an equally impressive 2-1 win at SWPL Premier team Ivybridge Town.

This is another “first” for Mousehole’s Trungle Parc – after the club’s first ever Western League game in July, followed by the first-ever FA Cup tie in August, and now today the first home FA Vase tie.

Mousehole are without goalkeeper Ollie Chenoweth (cup-tied with Bodmin Town), Mark Richards, Andy Elcock and Jamie Devine (injured), and Josh Magin and Sean Roberts (unavailable).  Keeper Jimmy Weeks, who was one of the heroes at Shepton Mallet, takes over in goal, while two other keepers, Ethan Elwell and Piran Jones are among the substitutes, as are youngsters Charlie Willis and Jack Symons.

Manager Jake Ash’s side were recently awarded the Western League Premier ‘Team of the Month’ for September, in which they recorded four wins out of four (including the FA Vase win at Shepton Mallet) and a goals record of 14 against 3.

It’s a cold and windy Trungle Parc, with Mousehole kicking into the wind gusting up from the Cricket Club end.

The key points of the match

8 seconds:  Wells get the ball straightaway into the danger area but it’s cleared from inside the Mousehole box

4 minutes:  Hayden Turner has space on the left inside the visitors’ penalty area, but good covering results in a harmless corner

6 minutes:  GOAL FOR MOUSEHOLE.  The ball is moved out to  CALLAM MCONIE on the right, and he brings it inside on his favoured left foot to drive a low 20 yard shot that zips into the net via the far upright with keeper Josh Nicol motionless.

10 minutes:  Wells have a possible chance from a free kick on the right floated towards the far side of a crowded six-yard box, but centre back Ollie Morris heads wide

13 minutes:  At the other end, Mark Goldsworthy is on to Hayden Turner’s cross from the bye-line and touches the ball onto the near upright

The first 15 minutes:  Mousehole are having more possession, but Wells are quick on the break, especially winger Craig Herrol

23 minutes:  Josh Otto nearly presents Wells with an equaliser as his lobbed back pass goes over Jimmy Weeks, but the wind holds the ball back and the keeper is able to get back and collect.  If that had been at the other end………..!

24 minutes:  Wells on the attack, with the hard-working Adam Wright creating a shooting chance from 18 yards which is defected just wide with keeper Jimmy Weeks a mere onlooker

25 minutes:  Wells have two corners in quick succession, neither of which pose a threat

31 minutes:  Craig Herrol is in an advanced position for the visitors after a twisting run, but his shot is blocked at the last moment, and he then heads the resultant corner wide

38 minutes:  Hayden Turner’s driven low free kick from the left is just beyond his attacking colleagues and skips past the far post

45+2 minutes:  Right back Kai Murdell makes a surging run deep into Mousehole territory and releases Harvey Hadrill for a shot on the right which goes wide of the near post.

That was the last kick of the half.  1-0 to Mousehole, but Wells have made it difficult with their energy and pressing, and the hosts will need to step up their game after the interval.

47 minutes:  Mousehole have come out with renewed vigour, Mark Goldsworthy making the defenders turn and firing in a shot from an angle that’s kept out by keeper Nicol’s boot

51 minutes:  GOAL FOR MOUSEHOLE. It’s 2-0 as CALLAM MCONIE moves the ball on to his left foot on the edge of the area and plants an accurate low shot just inside the near post

52 minutes: Callam Mconie has another go, this time his shot is deflected for a corner on the right

53 minutes: GOAL FOR MOUSEHOLE.  CALLAM MCONIE drives in the right-sided corner – a low left footer close to the near post, and somehow it ricochets over the line.  Two goals in three minutes and a hat-trick for the ex-Newquay man.

61 minutes:  The visitors are looking to salvage something.  Over the next five minutes, Craig Herrol shoots just past the far post, Adam Wright then hooks a 15 yard shot too high from a short free kick, and Herrol then races through on goal after Mousehole carelessly lose possession, but gets the ball stuck under his feet, and Paulo Sousa is able to retrieve the situation.

69 minutes:   Callam Mconie this time provides an assist with a well-weighted through ball for the sprinting Hayden Turner, who shoots over

73 minutes:  Josh Nicol in the Wells goal parries a fierce Tallan Mitchell shot from 18 yards, as Mousehole look in the mood to add to their three-goal tally.  Have Wells now given their all?

74 minutes:  The short answer is ‘No’ – the visitors intercept a stray pass and the goalbound shot is deflected for a corner.  Across comes the flag kick into a crowded six-yard box and the ball hits the crossbar before being cleared.

78 minutes:  Mousehole substitute – Max Hill is replaced by Kyle Fraser, with a bit of reshuffling at the back

80 minutes: Nearly goal number four as Callam Mconie whips in a low cross from the right and Mark Goldsworthy does well to get to the ball under pressure but prods wide of the near post

87 minutes:  Mousehole continue to mount a strong finish to the game, Josh Nicol rescuing his side as Hayden Turner races past the tiring defenders but drives against the keeper’s legs

90+2 minutes: GOAL FOR MOUSEHOLE.  An outstanding passing movement between the two teenage substitutes!  Jack Symons picks the ball up on the right, midway through the Wells half, moves swiftly inside and executes a perfect one-two with Charlie Willis, before releasing Hayden Turner running into space.  The shot is too hot to handle for the keeper and MARK GOLDSWORTHY swoops in typical fashion to touch the ball home before the defenders can react.

90+4:  At full time it’s Mousehole 4-0 Wells City.  All credit to both sides for playing to their relative strengths in difficult conditions.  Mousehole into the Second Round for yet another “biggest game in the club’s history”, with the draw to be made at lunchtime on Monday.

This Saturday, 30th October: Away at Shepton Mallet WLP), 3pm