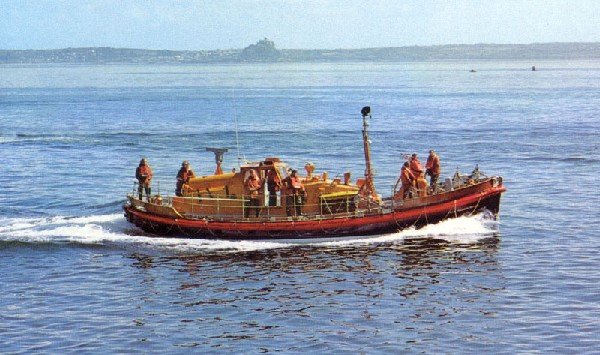 Saturday 11th December was a poignant day for everyone associated with Mousehole Football Club and the Penlee Lifeboat Station.

At the start of the football season, the club’s committee decided to name their newly constructed stand at Trungle Parc  ‘The Solomon Browne Stand’, after the lifeboat involved in the Penlee Lifeboat Tragedy 40 years ago – and to have it officially opened on a matchday as close as possible to the anniversary date.

The terrible events of 19th December 1981, are well documented online (for example, on Wikipedia).  As a summary, the plaque unveiled on Saturday in the new Stand contains this inscription:

DEDICATED TO THE MEMORY OF MOUSEHOLE MEN

LOST IN THE PENLEE LIFEBOAT TRAGEDY ON 19TH DECEMBER 1981

THE EIGHT MEMBERS OF THE VOLUNTEER CREW

OF THE RNLI LIFEBOAT ‘SOLOMON BROWNE’

AMID 60FT WAVES AND 100MPH WINDS, THEY WENT TO THE AID

OF THOSE ON BOARD THE STRICKEN ‘MV UNION STAR’,

ALL EIGHT OF WHOM ALSO PERISHED

The plaque was unveiled by Neil Brockman, with a speech given by brother Kevin – sons of Nigel Brockman the Assistant Mechanic on the Solomon Browne.  Penlee Lifeboat coxswain Patch Harvey attended the opening ceremony, as did relatives of those lifeboatmen who also lost their lives, alongside families of current lifeboatmen and former Mousehole AFC players who served for the RNLI.

The Penlee Lifeboat crew were represented by father and son Lesley ‘Nabbo’ Nicholls, who are former and present crew members, and both avid Mousehole AFC supporters.

The Mousehole Male Voice Choir performed on the terrace before the match (which was against Shepton Mallet in the Western League Premier Division) and in the new stand at half time, with well-appreciated renditions of ‘You’ll Never Walk alone’, ‘Ave Maria’ and ‘Calm is the Sea’.

The visiting Committee of Shepton Mallet football club graciously presented a floral wreath bearing the message: “In respectful memory of 16 lives lost in the Penlee disaster of 1981 and the community of Mousehole who live on with that sad legacy.”

Footage of the events filmed by the club’s documentary-maker Kevin Bishop has been broadcast several times on BBC-TV’s local news programme ‘Spotlight’ (which is available to view on BBC IPlayer), together with an article on the BBC’s website and an item on BBC Radio Cornwall (available on BBC Sounds).

Neil and Kevin Brockman, who used to play for Mousehole, referred to the ‘phenomenal progress’ the club had made in recent times and said of the day’s events that their father “…would be doing somersaults on the moon if he was still here now”.

The Penlee Lifeboat Twitter page spoke of “….A very touching tribute by Mousehole AFC and its wonderful supporters”.

Brian Richardson, a long-standing member of the club’s Committee who put in much time and effort in contacting people and organising a very important day in the club’s history, said the events were extremely thought-provoking:  “I grew up with many of those brave men in the village of Mousehole and know how much they were a big part of the football club.  So many of our Committee and supporters were friends or even family of the lost men.  It was a privilege to be asked to organise the proceedings on Saturday, and another particularly pleasing point was to see many of our Junior footballers standing proudly in their club kit – they are the future of the football club and they’ll be able to tell others of this day.”

At the time of the Solomon Browne Tragedy the lifeboat station was located just outside Mousehole and most of the serving members lived in the village.  Now stationed in Newlyn, the Penlee Lifeboat retains strong links with Mousehole AFC, as evidenced on the club’s playing kit, with the RNLI logo displayed prominently on the shirt sleeves.

Chairman Deryk Heywood, who played for the club in the late-1970s, summed up the event: “It’s a special day for the whole community.  The bond between Mousehole football club and the Penlee Lifeboat has always been very close and we fully intend to continue that.  Naming the stand in honour of the lost lifeboat and crew will keep it in the memory for ever.  There are no proper words to describe the bravery of those men, who risked everything for others.”

The Chairman also praised the many members of the club Committee who had made a vital contribution to the success of the day.  He also thanked the businesses responsible for building and sponsoring the Solomon Browne Stand – Cornwall Planning Group, Scaff West, Semmens Fabrication, Duke Street Cafe Newlyn, RGB Building Supplies, TGP Construction, SAP-Ignite and Wolf Jansen – with their contribution also visible in the stand.

The kick-off for the match was preceded by an impeccably observed minute’s silence by players of both sides and the 212 spectators, the club’s largest League attendance of the season.  Mousehole went on to win 1-0 with a late goal scored – most fittingly – at the ‘Solomon Browne’ end of the ground.