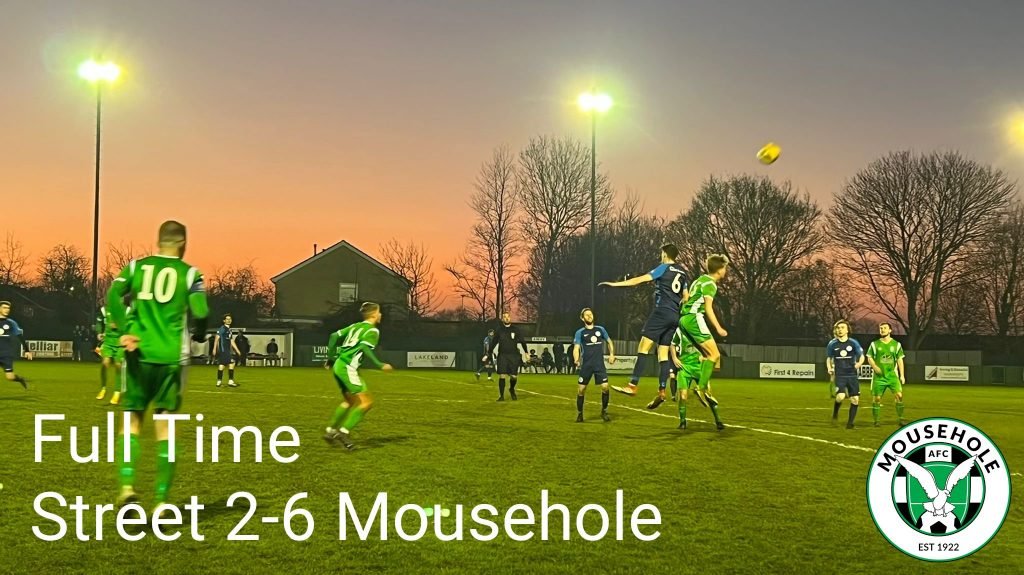 At The Tannery Ground

Mousehole are “on the road to Street” for their 18th League fixture, the half-way point of their first season after promotion.  Their last away game was at Dorset-based Bridport, resulting in a 6-0 win.

They are without the injured Mark Goldsworthy, Andy Watkins, Andy Elcock and Josh Magin, and Louis Price through illness.  Jack Calver starts after his permanent signing from Bideford, Paulo Sousa returns to the squad after illness, and Ollie Chenoweth is cleared to play after the club’s successful appeal against his red card in the narrow 1-0 home win over Shepton Mallet last Saturday.

Mousehole are currently on a run of 10 wins in the last 12 League games and occupy 6th place in the table, with games in hand over the teams above.

Street AFC are a well-established Western League club, having been runners-up five years ago, promoted to the Step 4 Southern League as WLP champions a year later, but then taking voluntary demotion for financial reasons after one season.  They now find themselves in the lower reaches of the WLP, with their last League points two months ago in an away 2-1 win at bottom-but-one team Ashton & Backwell United.

Named after the local leather shoe-making industry, Street play at the Tannery Ground and are known as ‘The Cobblers’.

Earlier in the season, Mousehole beat Street 4-1 at Trungle Parc, with goals from Mark Goldsworthy (2), Josh Magin and Jamie Devine, in front of 138 spectators.

This afternoon’s weather is fine but cold, and the pitch surface is soft.

The key moments of the match

17 minutes:  Not a lot of noteworthy incident has happened so far, but suddenly Tallan Mitchell’s forward pass unlocks the home defence and Hayden Turner shots high and wide from right of centre 15 yards out

20 minutes: GOAL FOR MOUSEHOLE.  The visitors have been getting into their rhythm, forcing two successive corners which are cleared.  Back comes the ball and Tallan Mitchell feeds Billy Curtis inside the box whose low left-footed cross-shot is pushed out by the diving keeper Harley Wilkinson for CALLAM MCONIE to slot the ball in from six yards.   Street 0-1 Mousehole.

22 minutes:  GOAL FOR MOUSEHOLE.  It’s 2-0 as HAYDEN TURNER converts a penalty after he had bamboozled the hosts’ defence and squared the ball in front of goal for Billy Curtis who was fouled as he was about to tap the ball in.

23 minutes:  Hayden Turner’s dynamic left-sided run is halted illegally, earning Leigh Bailey and Harry Foster a yellow card each.  The Mousehole hitman then drives the free kick in from an angle and Harley Wilkinson does well to get down to hold the ball at his near post.

27 minutes:  A clear chance for Street, as Alessandro Constanza is unmarked in front of goal from a lofted right-sided cross but puts the header over the bar from six yards

30 minutes:  Street are encouraged by that.  This time a left-sided cross comes in and Josh Otto shows brilliant anticipation to head the ball away from close in

33 minutes:  Callam Mconie finds Hayden Turner in space 15 yards out but the shot is too high

45+3 minutes.  At the interval, it’s Street 0-2 Mousehole.  The young home side are certainly working hard but Mousehole have more control and options.  The next goal could be significant.

47 minutes:  GOAL FOR MOUSEHOLE.  Billy Curtis deposits a right-wing cross into the mix, the ball drops down and CALLAM MCONIE back-heels it into the net.  That goes into the category marked ‘Cheeky’.  Street 0-3 Mousehole – an ideal time to score to nullify the effects of the hosts’ half-time team talk.

50 minutes:  GOAL FOR MOUSEHOLE.  The home defence is overwhelmed by a burst of attacking and KYLE FRASER has travelled forward from the back to get to the ball first and poke it over the line.  That’s the ex-Porthleven man’s first goal for the club since arriving in the summer.  A full moon has appeared over the horizon as if to mark the occasion.  Mousehole 4-nil ahead.

55 minutes:  Callam Mconie has a sight of goal and hits the side netting with an ambitious first-time volley on the turn

60 minutes:  GOAL FOR STREET.  The home crowd are for the first time in full voice as captain HARRY FOSTER breaks through the back line and fires low into the net.  Now 1-4.

65 minutes:  A clear chance for goal number 5.  Tallan Mitchell chases a long ball and fires over from 15 yards when one-on-one with the keeper

80 minutes:  Kyle Fraser and Paulo Sousa are eating up the ground on the left – the latter’s low cross just evades Hayden Turner and Callam Mconie in front of goal

81 minutes:  The unmarked Tallan Mitchell gets a shooting chance but his half-volley from inside the area is too high

82 minutes:  GOAL FOR MOUSEHOLE.  Street’s defence is caught playing a high line.  Talan Mitchell chips a through ball for HAYDEN TURNER to run on to, outpacing and then wrong-footing the covering defender with ease before driving low past keeper Wilkinson for a 1-5 scoreline.

83 minutes:  Loud shouts for a penalty for Street as a dangerous cross by Jordan Lovibond comes in from the right and bounces clear from some part of a Seagull defender’s anatomy.

85 minutes:  It’s become an end-to-end finish to the match.  The hosts are playing with bags of effort and spirit.  But it’s nearly a sixth goal for the visitors as Tallan Mitchell receives a short corner, moves inside and flashes a low shot inches past the far post

86 minutes:  Street come close with a swerving free kick towards the near post requiring Callam Mconie to show his defensive qualities by booting the ball out for a corner

87 minutes:  Callam Mconie is now up the other end, his left-footed drive from 18 yards going just wide with the keeper beaten.  A few seconds later he beats two defenders to create a simpler chance from closer in but hammers the ball way over.

88 minutes:  GOAL FOR STREET.  Jordan Lovibond breaks swiftly from a central position 30 yards out, rounds Ollie Chenoweth and passes calmly inside for captain HARRY FOSTER to slide the ball into the vacant net.  Street 2-5 Mousehole.

89 minutes:  Ollie Chenoweth is forced into a good save as Jordan Lovibond again provides the menace with a run and shot

90 minutes:  GOAL FOR MOUSEHOLE.  The home defence is pulled out of position by the visitors’ skill and speed on the left, giving HAYDEN TURNER the chance to take the ball inside and notch his hat-trick goal with a low shot from 18 yards

What this result means

Away at Helston Athletic