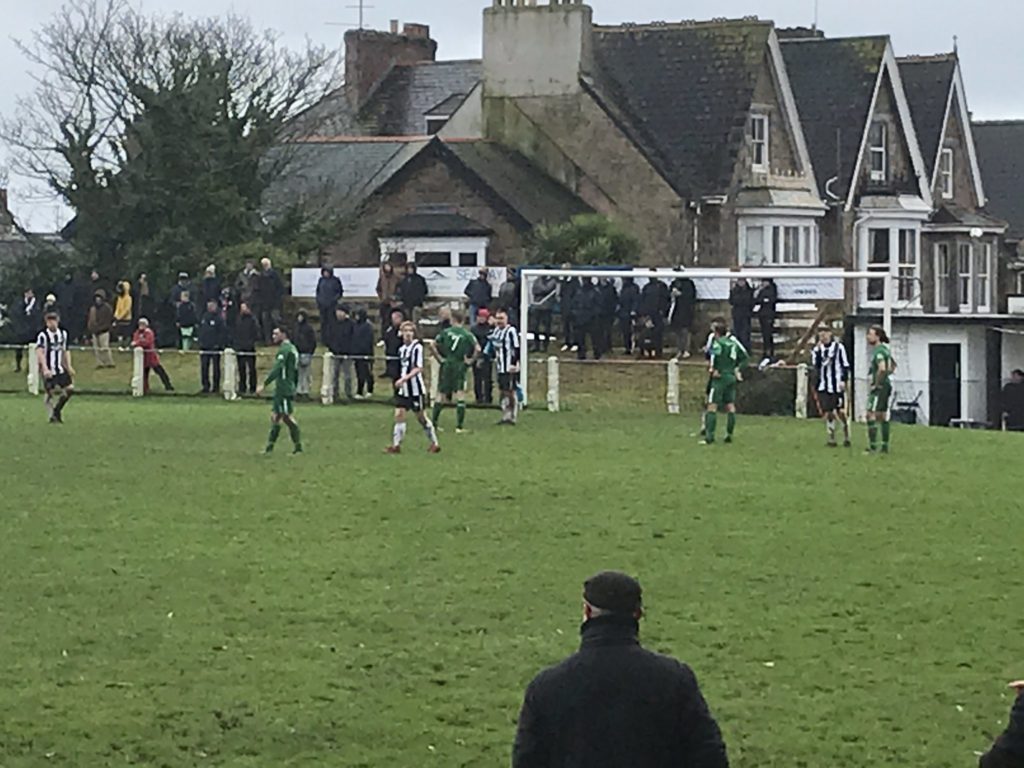 Form-book and League position counted for little as a table-topping Mousehole were matched by a spirited Penzance in an exciting encounter, with both sides coming close to claiming all three points in front of a large crowd kept on the edge of their seats for much of the game.

8 minutes:  Max Gilbert gets down the Penzance right and puts in a dangerous cross, well dealt with by the home defence

10 minutes:  Mousehole attack again, with Tallan Mitchell latching on to a Penzance clearance to send in a low shot which Mikey Flores keeps out at full stretch

11 minutes: Josh Magin moves inside and fires a left-footer wide of Flores’ far post from 18 yards

15 minutes: Two chances for The Seagulls in quick succession, as Hayden Turner’s header from Billy Curtis’cross is cleared off the line by youngster James Swan, then Mark Goldsworthy plants a six-yard header straight at Flores

16 minutes:  It’s Penzance’s turn to threaten.  Kevin Lawrence launches a 35-yard free-kick towards the far post, Mark Vercesi heads the ball back inside and Andreas Steyne puts an overhead kick too high from 12 yards

17 minutes:  A replica move – this time Cory Harvey in The Seagulls’ goal punches clear as Vercesi again is the target man

19 minutes:  Once more – Lawrence floats in a free kick from the right-hand side of the penalty area and Vercesi’s header is hacked away from in front of goal

20 minutes gone and Penzance are right back in this game, denying Mousehole space in the final third and harrying their opponents into mistakes on a pitch that is already cutting up

22 minutes:  At the other end Tallan Mitchell creates a chance for Josh Magin with a back-heel but the shot from 18 yards is straight at Flores

25 minutes:  A clear chance for Mousehole – Mark Goldsworthy gets free from his marker on the right hand side of the box and his cross in front of goal is sliced wide by Tallan Mitchell from six yards

30 minutes:  The vocal Penzance support is loudly encouraging every Magpies tackle as the home side have stepped up a gear

31 minutes:  Penzance’s Jacob Cleverly sends in a strong cross-shot but Cory Harvey does well to collect on the treacherous surface

33 minutes:  Tallan Mitchell makes a slalom-type run over the skiddy surface and is fouled 20 yards out.  Max Gilbert whips in the free kick past the defensive wall but the alert Flores pushes the ball out for a corner

36 minutes:  The Seagulls at long last put together a trademark quick-passing move that out-foxes the Penzance defensive formation, but Tallan Mitchell’s shot from 20 yards zips wide

40 minutes:  Back come The Magpies, forcing yet another free-kick deep in Mousehole territory, but this time the danger is comfortably cleared

45+1:  Half-time – it’s 0-0, but with lots of end-to-end and goalmouth action.  Great credit to Penzance for their energy and determination, but will they be able to maintain this level in the second half, or will Mousehole make the most of their own qualities and fitness?

46 minutes:  Mousehole start the second half on the offensive, with Josh Magin manoeuvring into position on the edge of the box, forcing Mikey Flores to spread himself in front of the low goal-bound shot

50 minutes:  Flores again to the rescue for The Magpies, springing across to divert Billy Curtis’ left-footer from 18 yards

54 minutes: Mark Goldsworthy almost nicks a goal for Mousehole with a deft back-heel volley at the near post from Hayden Turner’s corner, but the ball clears the bar

56 minutes:  Max Gilbert looks certain to score for The Seagulls as he lets fly from just inside the box with the home defence for once in disarray, but Mark Vercesi puts his body in the way of the shot

58 minutes:  After surviving four close scares since half-time, Penzance benefit from another free-kick in the Mousehole half.  Kevin Lawrence delivers the customary lofted free kick to the far post, where Mark Vercesi gets ahead of Cory Harvey’s punch to head goalwards, but the ball is scrambled off the line for a corner.  Up come the Magpies’ defenders.

59 minutes:  GOAL FOR PENZANCE!  It’s the aerial menace again!  Kevin Lawrence places the corner kick into a congested six-yard box, the heads go up and the ball creeps over the line, with young centre-back TYLER BUCKLEY getting the all-important touch.  Ecstatic celebrations on and off the pitch.  Cory Harvey protests he was impeded, referee Simon Long disagrees.

62 minutes:  Mousehole substitutes – Andy Elcock for Steve Burt in midfield, and Jude Boyd for Max Gilbert, enabling Hayden Turner to move inside from a left-wing position

67 minutes:  Mousehole looking to profit from that let-off.  Hayden Turner’s free kick on the right side of the box is cleared away, Jude Boyd retrieves the ball on the other side to create a near-post chance for Mark Goldsworthy but Flores again gets in the way

70 minutes:  PENALTY!  Tallan Mitchell slides a cute pass through to put Mark Goldsworthy in one-on-one with Flores, who clatters into the striker.  There’s a two-minute delay while The Seagulls’ newest recruit is treated for a painful injury.

72 minutes:  GOAL FOR MOUSEHOLE.  HAYDEN TURNER drives the penalty hard and low into the corner – anything less would have been a problem, as Flores dived the right way and very nearly got his fingertips to it.

As the equaliser is celebrated, the rain stops and the sun comes out!  Is this a sign?  A very interesting 20 minutes to come!

75 minutes:  Penzance heads have certainly not dropped:  loud appeals for a penalty as Kevin Lawrence is tackled as he dwells on the ball inside the Mousehole penalty area.  Referee waves play on. The sun has gone in again and it’s raining – so it wasn’t a sign!

75 minutes:  Mousehole’s third substitute:  Jamie Devine is replaced by Jonny Ludlam on the left in defence, as Lewis Goldsworthy has developed an appetite for direct running on Penzance’s right.

80 minutes:  Mousehole are seeing much more of the ball , but Penzance are resilient and still attack-minded

83 minutes:  Close for Mousehole twice  – Jonny Ludlam puts an inviting cross into the six-yard area but it’s just beyond the lurking Mark Goldsworthy.  Hayden Turner picks up the ball and crosses to the far post but it’s inches to high for Mark Richards, who’s up from the back looking for a winner

84 minutes:  The other Goldsworthy makes another close-control run into the heart of the Mousehole defence and looks likely to pull the trigger, but Jonny Ludlam snuffs out the danger with a well-timed tackle, prompting yet more big shouts for a penalty ignored by the referee

86 minutes:  Controversial incident!  Hayden Turner collects a loose ball after a coming-together on the Penzance 18-yard line and, with referee Simon Long indicating ‘advantage’, hammers a 15-yard right-footer past Flores for what looks like a winner.   However, Neil Stephens’ flag is raised and the referee cuts short the goal celebrations by bringing the play back for a Mousehole free-kick.

87 minutes:  Jonny Ludlam scuffs the free kick through the defensive wall, where Josh Magin turns to shoot and the ball is cleared off the line

90+4 minutes:  Hayden Turner tries an angled drive but that man Flores blocks it at the near post

90+5 minutes:  Incredible drama – Flores slips as he clears from the edge of his area, Tallan Mitchell partially loses his footing as he returns the ball towards the unguarded Penzance net from 35 yards out, and the shot slows down enough for the athletic Tyler Buckley to get back to clear away in front of goal for a corner

90+6 minutes: Hayden Turner swings the corner into the posse of players, it’s cleared off the line again, and the final whistle sounds.

Full time score: 1-1.  It could have gone either way.  All credit to both sides for providing the large Boxing Day crowd with nearly 100 minutes of action-packed football – great value for money.  With 36 attempts on goal in total, it’s amazing only two goals were scored!