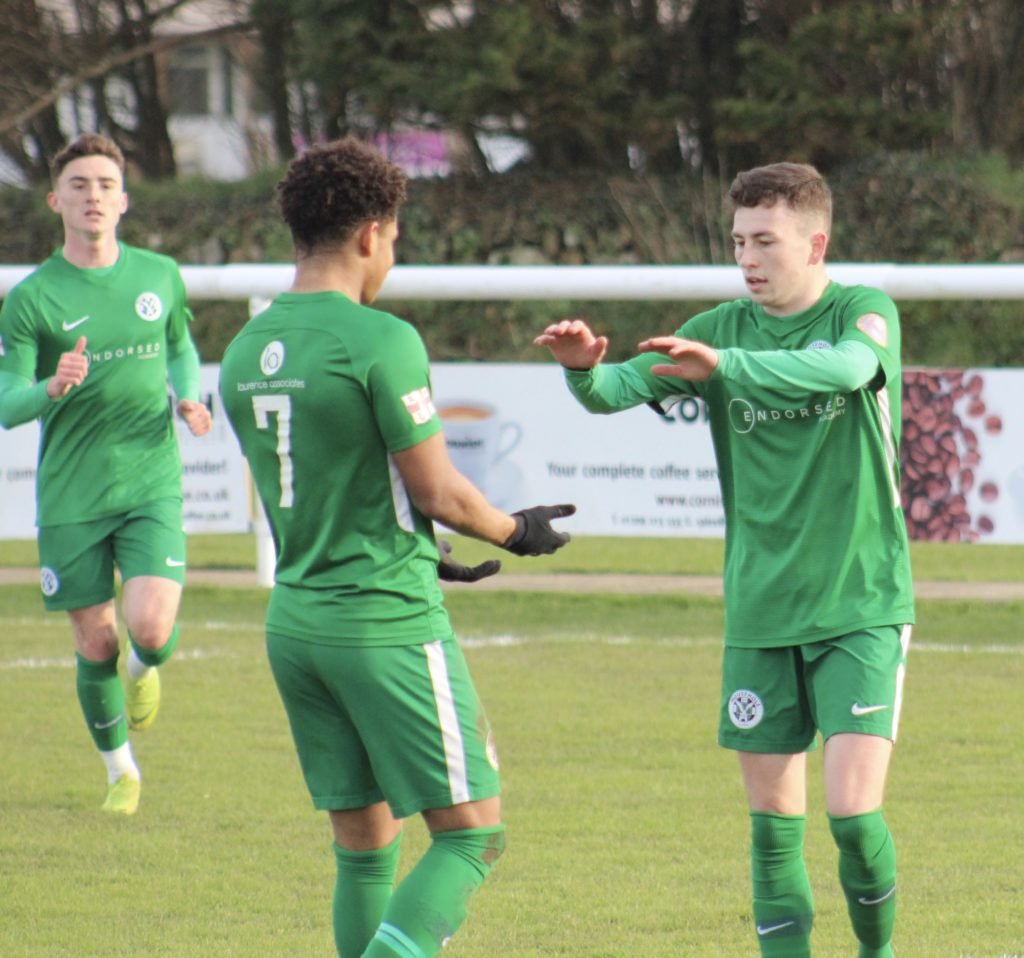 A Hayden Turner hat-trick helped Mousehole to a convincing win to keep them in fourth place and within touching distance of this season’s two promotion places with 15 league games to go.

Four goals in each half were an adequate reward for Mousehole’s dominance, with Hayden Turner taking his tally to nine in four games, assisted by scores from wingers Amara Bakayoko (now up to 19 goals) and Rheiss McClean (11), a brace from Tallan Mitchell and an own goal, with Turner also missing a penalty.

Sticker had started the season slowly, and Mousehole had already beaten them 6-0 on their own turf in the Cornwall Senior Cup in November, but three good wins from their last four matches had lifted them off the foot of the table up to 18th.  They had an early chance – and their only one of the match – when Sam Begen got free 30 yards out but shot wide as he advanced on goal in the 5th minute.

Mousehole had already given notice of their attacking intentions in the second minute when Amara Bakayoko made a dazzling 50-yard run for Hayden Turner to connect with his low cross from six yards, but keeper Anton Lake started off his busy afternoon with a great point-blank save.

After an early period of casual play, Mousehole then got into gear and, with Ben Harding experimentally deployed as a front man and continually bringing his attacking colleagues into promising positions, they produced a much higher-tempo performance than had been the case earlier in the season.

Tallan Mitchell opened the scoring in the 15th minute, starting the move with a superb interception and one-two in midfield, with Ben Harding sliding an astute pass inside the defence for the midfielder to net through the keeper’s legs from 15 yards.

A minute later Turner was just the wrong side of the post with an angled volley, before Rheiss McClean’s inswinging corner glanced off a defender’s head at the near post for 2-0 after 21 minutes.

After 36 minutes it was 3-0 when Turner was fouled in the box after another quick pass forward and comfortably despatched the penalty.

Amara Bakoyoko was then just wide after a brisk move from the back involving Mark Richards, Ben Harding and Steve Burt on 39 minutes, and another incisive burst forward created space for Turner on the left to send over a pinpoint cross which Rheiss McClean headed home from 6 yards two minutes before the interval for a 4-0 scoreline.

The second half carried in in the same vein, Mitchell being denied by Lake’s outstretched boot on 49.  In the 56th minute Referee Price harshly judged visiting captain Mickey Rowles-Jane to have handled a cross from the left, but justice was done when Lake beat out Turner’s penalty.  The striker made amends three minutes later after being put into space and side-footing home to make it 5-0.

Lake’s boot again prevented a goal – and Turner’s hat-trick – on 61, before Bakayoko swerved inside two defenders a minute later to plant a right-foot shot from 10 yards inside the post for 6-0.

Hayden Turner’s hat-trick finally arrived in the 85th minute, thumping the ball into the roof of the net from the corner of the six-yard box after another impressive pitch-length passing move.

The scoring was completed in the first minute of added-on time, Tallan Mitchell heading home Bakayoko’s cross for his second goal and Mousehole’s eighth.

This Saturday (8th February) sees the first of the two Cup quarter finals The Seagulls will play during the month.  Torpoint Athletic – lying in third place in the SWPL Premier east Division – are the visitors to Trungle Parc for a 2pm kick off in the Cornwall Senior Cup.  The other quarter finals are Falmouth (the holders) against Saltash, Millbrook v Liskeard, and Wadebridge v St Blazey, with the semi-finals scheduled for Tuesday 3rd and Wednesday 4th March at neutral venues.

The other Cup quarter final is in the SWP League Cup (the Walter C Parson Cup) away at East Division Bovey Tracey on Saturday 29th February (2.30pm).  Seats are available for booking on the coach, with details available in the clubhouse.

In the meantime, Mousehole have two league games: at home against Porthleven on Saturday 15th February, and away at Liskeard Athletic on 22nd, both with a 3pm kick off.