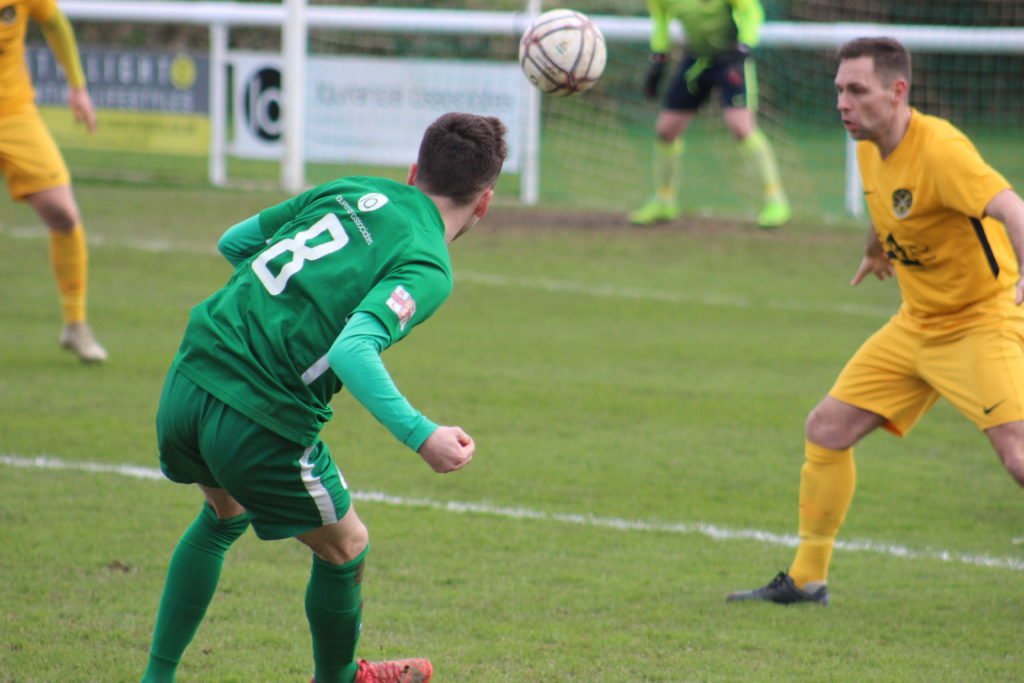 Fourth in the West Division hosted third in the East on a dry but increasingly windy afternoon and it was the well-supported visitors who won through to the semi-finals of the prestigious County Senior Cup with a mid-second half strike – their only clear-cut chance of the match – that would have been a contender for Match of the Day’s Goal of the Month.

Torpoint’s Jason Peters was by far the busier of the two goalkeepers, particularly in the first half, but in the end Mousehole were kept at bay by a strong and well-marshalled defensive division, while their quick breaks downfield and hold-up play kept the home side’s back line occupied throughout the match.

Jake Ash made several changes from the side that beat Sticker 8-0 the previous Saturday, with Dom Angove replacing the unavailable Cory Harvey in goal and the returning Kieran Toland taking up the striker’s role with Hayden Turner cup-tied, while Ben Harding dropped into a deeper midfield position and Tallan Mitchell was deployed in an unaccustomed winger’s role.

The eventual scorer Curtis Damerell had already come close in the 7th minute with a one-on-one chance blocked by Dom Angove, before Kieran Toland drove wide of the near post after an Amara Bakayoko pull-back from the byeline a minute later.

On 16 minutes, Steve Burt made a swift interception and swerved in a shot from 25 yards, forcing Peters into a flying save.  Two minutes later the keeper cut out a low Bakayoko cross just in time, while at the other end centre back John Heveran headed over a great 6-yard chance from a corner on 25 minutes and just after the half hour Damerell got free on the left to deliver a cross into the middle where Lewis Young looked likely to score but dallied too long.

Mousehole had a good five minute spell before the interval, Peters coming out to block Ben Harding’s goal attempt in a crowded box, Heveran making a timely clearance in front of goal from Bakayoko’s cross, and the keeper denying the same player’s curling 15-yarddrive towards the far corner with a full-length save.

The opening period of the second half saw the home side again creating the chances, with Lez Cela’s drive on 56 minutes partially stopped by Peters and defender Peter Bradley hacking the ball away from danger inside the six yard box with the keeper still grounded.  More was to come, as Bakayoko’s wind-assisted corner came back off the crossbar in the 62nd minute and Tallan Mitchell’s floated cross-cum-shot from the left rebounding off the far post in the next phase.

Despite the near-misses, the warning signs were already there as Damerell and winger Gary Hird were strong, sharp and quick as they latched on to long clearances on the break.  In the 65th minute Mark Richards kept the Seagulls in the match with a clearance off the line, but barely a minute later the home defence failed to clear a left wing corner to safety and as the ball was lobbed back into the middle Damerell produced the perfect overhead kick from around the penalty spot to send the ball past a helpless Angove.

Far from going back on defence, Torpoint continued on the offensive and threatened further goals with Hird shooting straight at Angove when well placed in the 70th minute, and volleying a presentable chance into the side netting in the 85th.

In the meantime, the visitors were defending well, suffocating Mousehole’s approach play within 25 yards of their goal.  But Kieran Toland might have shot instead of passing to Lez Cela on 71, substitute Glenn Gabriel was foiled by Peters on 74, and substitute Gerens James had perhaps the best chance of the match on 77 but drove too high from 12 yards when Ben Harding’s short pass gave him a sight of goal at last.

Torpoint managed the game well in the last ten minutes to end any prospect of a grandstand finish, and the Seagulls’ frustrating afternoon was completed when Cela was sin-binned in added-on time for his comments about a ‘soft’ free kick awarded to the visitors.

Torpoint Athletic are joined in the Senior cup semi-finals by local rivals Millbrook and Saltash United, winners over Liskeard Athletic (home) and Falmouth Town (away) respectively, while Wadebridge Town make up the quartet after a home win over St Blazey.

The Seagulls are now left in just one Cup competition, the SWP League Cup (aka The Walter C Parson Cup), in which they face a difficult away quarter-final tie at East Division Bovey Tracey on Saturday 29th February.  The Moorlanders, who have lost only once at home, are currently in 8th position but with at least three games in hand on those above them, and they are the Division’s highest scorers with the meanest defence.

Mousehole are next in action this Saturday 15th February with a home league match against Porthleven (3pm).  The Fishermen are starting to recover from a mediocre middle part of the season after a promising start and are currently in 9th place with 8 wins, 5 draws and 7 defeats.  This will be the third encounter of the season between the two sides.  The league match at Gala Parc in August ended up 2-2 with a last-kick penalty equaliser for the hosts after The Seagulls had earlier been two goals ahead.  And Mousehole’s first-ever game under the new Trungle Parc floodlights in October resulted in a 2-0 rain-sodden win with two late Kieran Toland goals.