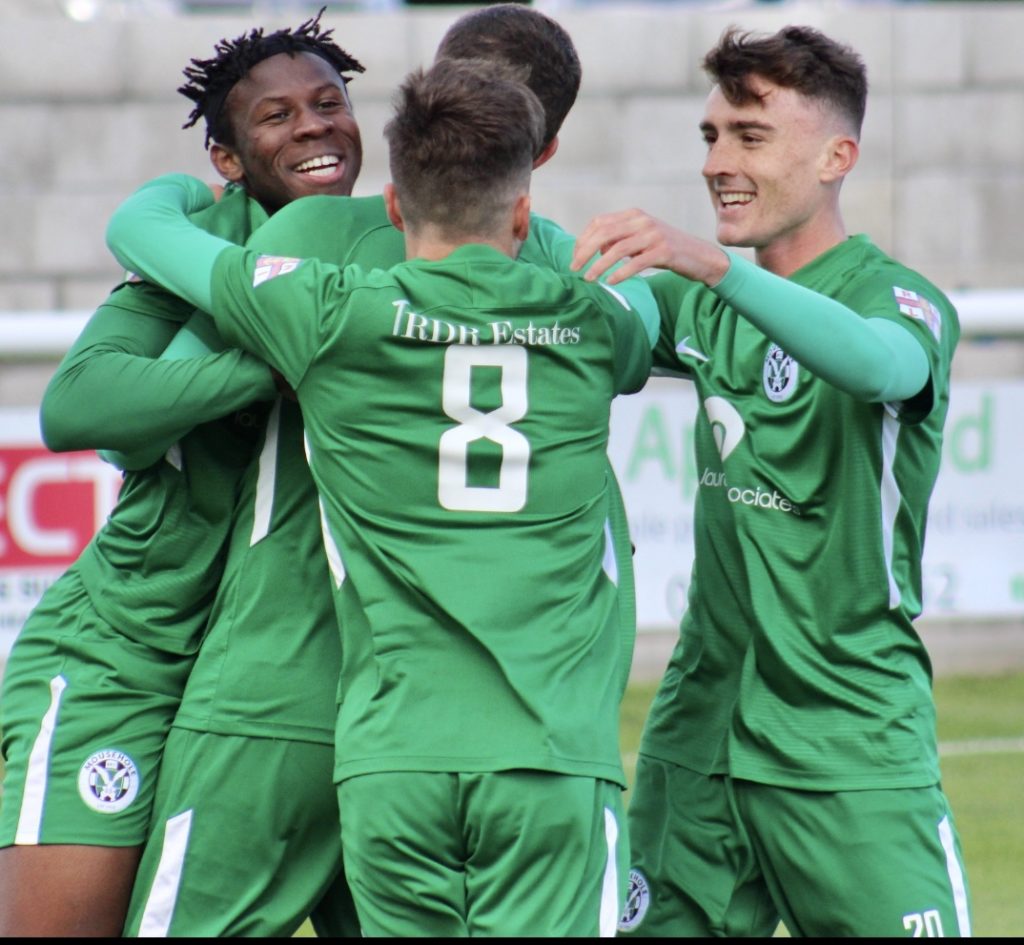 Football was the winner at a windswept Trungle Parc as Mousehole showed great character to resist Bodmin’s tactics and execute their own game plan to record a third consecutive success against the League’s most trophy-laden club.

5 minutes:  Close for Mousehole – Amara Bakayoko, back after  three-week injury lay-off, fires a fierce angled shot from the left just past the far post

9 minutes:  Close for Bodmin – Chris Reski’s goalbound shot from 15 yards is blocked for  corner.  The corner is marginally too high for the two onrushing central defenders closing in on goal

10 minutes:  GOAL for Mousehole – Amara Bakayoko is back on the goal trail, beating the offside trap through the middle to drive the ball left-footed inside the post

11 minutes:  GOAL for Bodmin – The visitors are gifted an immediate equaliser as Martin Watts’ characteristic left-footed free kick from 25 yards is driven straight at Cory Harvey, but the Seagulls’ keeper lets the ball bounce off his chest and Stuart Bowker heads in an easy chance from close range

15 minutes:  Close for Mousehole – Amara Bakayoko’s back-heel is cleared off the line after Hayden Turner opens up the defence with  a great run and cross on the right

24 minutes:  Close for Bodmin – Cory Harvey makes amends for his earlier lapse by grasping a header destined for the top corner

25 minutes:  Close for Mousehole – Mark Richards brings the ball forward at speed from the back and releases Hayden Turner, but the striker fires wide of the near post

32 minutes:  Close for Mousehole – Hayden Turner scoops over from six yards as Tallan Mitchell creates the chance from the byeline on the left

45 minutes:  Close for Bodmin – Dan Jennings’ pace gives him a half-chance but he shoots wide of the far post

Half-time: Mousehole 1-1 Bodmin.  The wind is causing passes to be over-hit.  Mousehole have more of the ball and look more likely to score, but Bodmin are determined to break up the play, with ever-increasing fouls, dissent and yellow cards.

52 minutes:  close for Mousehole – keeper Ollie Chenoweth makes an alert save at the far post from Amara Bakayoko’s low cross

Little is seen of Bodmin as an attacking force, but the tackles are certainly hotting up.  Mousehole are continuing to play their passing brand of football and are now dominating.

67 minutes:  Closer still – Andy Elcock hits the top of the crossbar from 18 yards after a perfect lay-off by Kieran Toland

68 minutes:  GOAL for Mousehole – Hayden Turner starts and finishes a thrilling passage of play, bursting clear on the right to put in a low cross, with Tallan Mitchell and Josh Magin both having shots cleared off the line.  The ball is recycled on the left hand side where Amara Bakayoko’s pin-point cross is met with a superb leap and header from 8 yards by The Seagulls’ top-scorer.  The hugely-celebrated goal is a merited reward for Mousehole’s refusal to be knocked out of their stride.

80 minutes:  Close for Mousehole – Kieran Toland nearly gets the third goal but keeper Chenoweth does well with the block

90+5:  Full time:  Mousehole 2-1 Bodmin Town.  A niggly game is finally over, with Mousehole glad to get the three points after home defeat to Saltash the previous week, but also taking great credit for the performance in difficult circumstances.

Mousehole are now in 5th place with games in hand over those above.  They now face two away ‘local derby’ games:  firstly, against 16th place Wendron United (this Tuesday), who lost 4-1 in their last match to previously win-less bottom club Launceston; and then Porthleven (this Saturday), who are beginning to pick up form after a slow start to the season, including a 3-0 loss to The Seagulls a month ago.  Then follows a home match on Tuesday 13th against lowly Godolphin Atlantic, who currently have only one point from their first eight games.