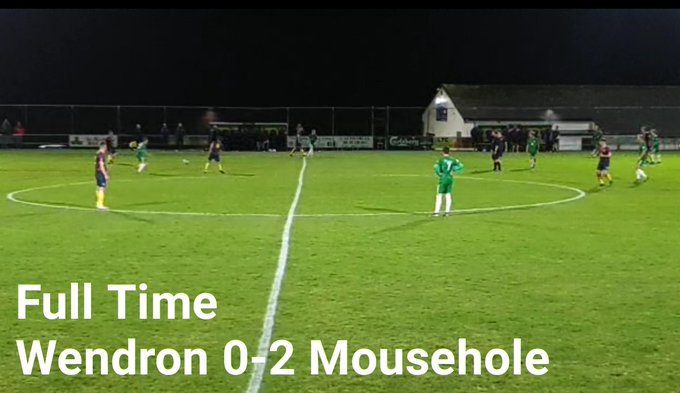 At kick off, Manager Jake Ash has made three changes in the starting line-up compared with Saturday’s hard-fought win over Bodmin Town, with a new centre-back pairing of youngsters Josh Otto and Tom Hands, and Andy Elcock replacing the injured Kieran Toland.

11 minutes – close for Mousehole:  a typical dash down the left wing by Amara Bakayoko ends with a low cross which Hayden Turner touches over the bar from inside the box

45+5 minutes – closest yet for Mousehole:  Tallan Mitchell’s surges forward from midfield but his shot from 25 yards is matched by keeper Adam Peters who saves under the bar

Half-time score 0-0:  a rare blank sheet for The Seagulls as they have not yet found a way to convert their clear superiority into goals

55 minutes – GOAL for Mousehole: the anticipated breakthrough comes as HAYDEN TURNER races through on the left to find Tallan Mitchell on the right of the penalty area, whose driven cross-shot is headed into the top corner by The Seagulls’ leading scorer

59 minutes – close for Wendron:  Tom Hands makes a great tackle to bring to a halt a threatening move inside the box

62 minutes – GOAL for Mousehole:  It’s 2-0 and a second for HAYDEN TURNER, with a quick shift on to his right foot left of centre on the edge of the box, and a neat curler low inside the far post for his 10th goal of the season

75 minutes – close or Mousehole:  Max Gilbert shows his shooting qualities with a swerving 25-yard free-kick just past the post

80 minutes:  Mousehole are now one short as Amara Bakayoko limps off, with all three substitutes already used

85 minutes:  The Seagulls have been in control and untroubled until now, but The Goats are beginning to have more of the ball as they sense an opportunity to get back into the game against the ten men

88-90 minutes – Wendron efforts:  a right-wing cross and two long-range shots come to nothing as Mousehole see the game out

A competent performance notable for the strength-in-depth of the squad and of course the three points, which makes it six wins from seven league games and an impressive 26 goals scored with only four conceded, including four ‘clean sheets’.

Attention now turns to the visit to Gala Parc on Saturday to face a Porthleven side that has recovered from a poor start to the season – including a 3-0 defeat to Mousehole at Trungle Parc – with three wins and a draw from their last four league games.