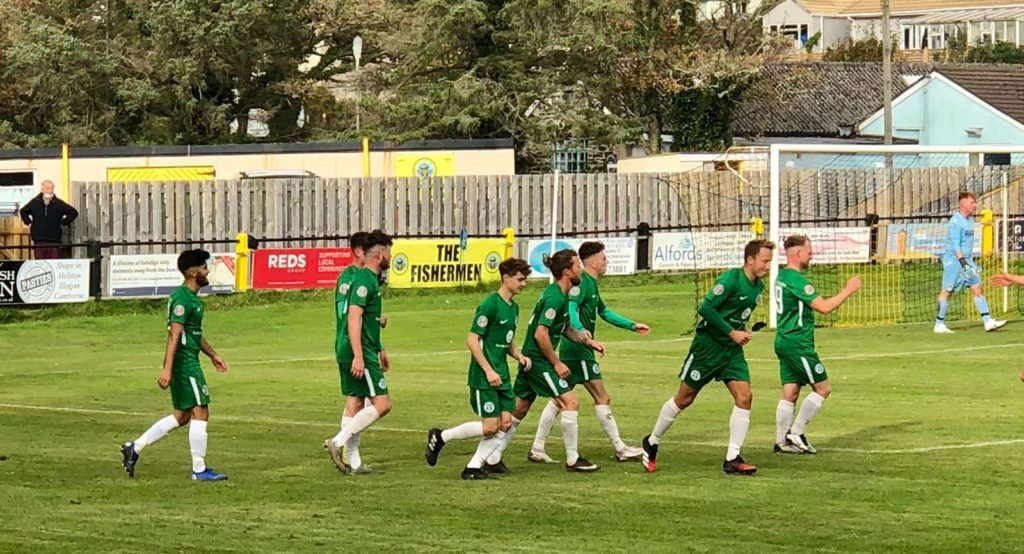 Mousehole had beaten Porthleven 3-0 at Trungle Parc in the second match of the season with goals by Kieran Toland, Steve Burt and Paulo Sousa, but Porthleven are in good form having won three and drawn one in their last four matches.

12 minutes – closest yet:  Paulo Sousa and Tallan Mitchell skilfully carve out a shooting chance on the left hand angle of the box for Kian Burns but his right-footed drive swerves just past the far post

25 minutes – even closer:  Kian Burns races on to a through ball, rounds Webster and rolls a shot along the goal line from a very tight angle

31 minutes – another chance:  Hayden Turner fires over the bar after another slick passing movement inside the penalty area

33 minutes – once more!  Tallan Mitchell scampers through and Webster blocks the one-on-one effort

35 minutes – three chances in one move:  Tallan Mitchell’s cross shot is pushed out at full stretch by the busy Webster and two follow-up shots are blocked bravely in front of goal

38 minutes – again:  Kian Burns’ pace takes him through with a straight run on goal, but the last defender takes both man and ball 25 yards out.  Referee Hunnisett awards a free kick, but strangely Porthleven’s Ross Duncan protests and is promptly sin-binned for the rest of the half.  Surely this is now a great time to get that expected  goal against the ten men?

40 minutes – nearly there:  Andy Elcock latches on to a partially-cleared corner and drives just wide from 18 yards

43 minutes – clearest chance yet:  Josh Magin’s low cross finds Hayden Turner free in front of goal just six yards out, but despite excellent control and a quick turn The Seagulls’ top scorer hits the outside of the post

Half-time score 0-0:  The home supporters can scarcely believe the scoreline.  The pattern of play resembles an exhibition match.  Mousehole have had enough scoring chances to make the second half a formality.  Will Porthleven come out with a renewed sense of purpose and make Mousehole pay?

51 minutes – the second half is continuing in the same manner:  Josh Magin makes some space for himself and shoots just over from 20 yards

60 minutes – GOAL for Mousehole:  It’s taken an hour, but Mousehole take a deserved lead at long last!  ANDY ELCOCK scores his first goal for the club, running in with perfect timing to scoop in from 10 yards, as Tallan Mitchell’s quick-thinking short free-kick by the corner flag releases Josh Magin to drive the ball low the ball into the middle

66 minutes – nearly a second:  Paulo Sousa dribbles in from the left but stumbles when well placed

72 minutes – close to No.2:  Steve Burt rounds off a sparkling defence-splitting move with an 18 yard shot well kept out by keeper Webster

77 minutes – another near miss for Mousehole:  Jude Boyd bursts forward to drive past the angle from 25 yards

86 minutes – GOAL for Mousehole:  With the Mousehole bench loudly telling the players to “Keep the ball”, Jude Boyd surprises everybody by turning, running and driving at goal from 20 yards.  Webster goes full length to divert the low shot but the alert HAYDEN TURNER this time makes no mistake, slotting in from close range for his 11th goal of the season.

87 minutes – Mousehole substitute:  Josh Magin is replaced by Max Gilbert on the right-hand side of the attack

90+4 minutes – full time: a second consecutive ‘local derby’ 2-0 away win, a 100% away record in the league, and the sixth ‘clean sheet’ in this season’s opening nine games.

The Seagulls’ third win in a week takes them to within one point of the top of the table, with a game in hand over leaders Camelford and Dobwalls, and a far superior goal difference.  The top of the table will become clearer in the next week, with Camelford facing Dobwalls on Tuesday, and Mousehole travelling to Dobwalls on Saturday.

In the meantime, a home match for Mousehole comes this Tuesday (13th) when Godolphin Atlantic are the visitors to Trungle Parc for a 7.30pm kick off.   The league’s bottom-placed team have had a difficult start to the season, with just one point from their opening nine games and 40 goals conceded.

*Mousehole have been drawn at home against Perranwell in the third round of the Cornwall Senior Cup, to be played on Saturday 7th November (kick off 2pm).  ‘The Well’ are currently in a mid-table position in the St Piran League West, the same level as Mousehole Development Team.