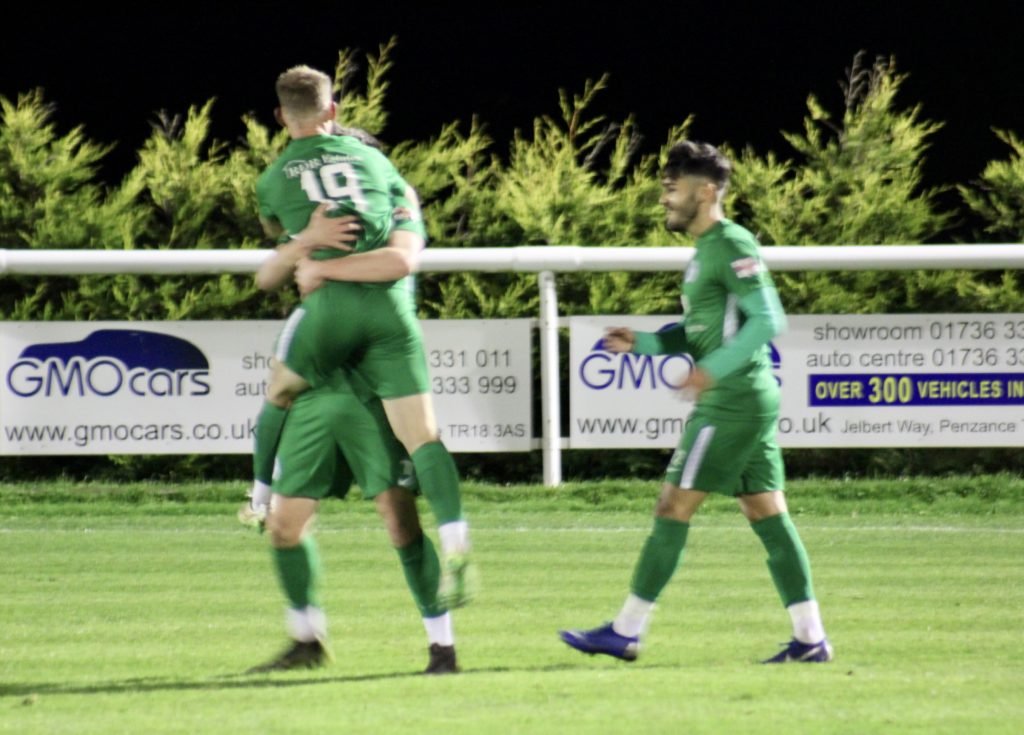 The Seagulls’ squad depth and quality was clearly evident in their eighth win out of nine opening league matches to go two points clear at the top of the table as they comprehensively outclassed bottom club Godolphin Atlantic, aided by a hat-trick from winger Kian Burns.

Manager Jake Ash’s starting line-up is again missing Kieran Toland and Amara Bakayoko through injury, while Max Gilbert is in midfield with Tallan Mitchell on the bench.

The opening 15 minutes: Mousehole are looking an attacking threat, visiting keeper Dale England keeping out goalbound efforts from Max Gilbert, Paulo Sousa and Steve Burt, but at the other end Ben Colquhoun intercepts a mix-up at the back and slides an angled shot across an open goal and past the far post.

16 minutes – GOAL for Mousehole: KIAN BURNS is fed on the left by Max Gilbert and Hayden Turner and brings the ball on to his right foot before drilling a low shot into the far corner.

20 minutes – GOAL for Mousehole:  KIAN BURNS scores a quick second, shooting low with a right-footer from a central position in the box.

21 minutes – GOAL for Mousehole:  It’s three goals in five minutes as MAX GILBERT send a low 20-yard drive into the corner after an astute set-up by Andy Elcock.

In the next few minutes, keeper Dale England denies Kian Burns’ hat-trick with a superb diving save, blocks Hayden Turner’s angled shot with his feet, and sprawls full-length to keep out Max Gilbert’s header.

30 minutes – GOAL for Mousehole:  MAX GILBERT makes it 4-0, starting and finishing a move by turning on the edge of the box and finding the far corner with a low shot.

34 minutes – GOAL for Mousehole:  HAYDEN TURNER exploits the visitors’ lost possession in the penalty area and drives home left-footed for 5-0.

40 minutes – close for Mousehole:  Jude Boyd makes a surging run to the edge of the area and shoots just wide, and in the next attack Andy Elcock is again just wide after a defence-splitting pass by Max Gilbert.

Half Time:  It’s 5-0 to The Seagulls, but the score could already have been in double figures.

46 minutes – close for Mousehole:  within 20 seconds of the re-start Kian Burns is clean through but misses the goal and his hat-trick.

47 minutes – close for Godolphin: the visitors’ second close call of the match, as keeper Cory Harvey spills a bouncing shot from distance but gathers the ball just in time

48 – 52 minutes:  Dale England is again in defiant action in the visitors’ goal, parrying a shot from Hayden Turner, saving with his feet from Kian Burns and then Hayden Turner, and blocking a drive by Jude Boyd, this time with his legs.

57 minutes – GOAL for Mousehole:  KIAN BURNS at last gets his hat-trick goal, latching on to a Max Gilbert pass into the left-hand channel, shifting inside on to his right foot and making sure with a firm shot past Dale England into the far corner for 6-0.

60 minutes – close for Godolphin:  the visitors show they have not given up, as Ben Colquhoun flashes a 20-yard drive just over with Cory Harvey at full stretch.

62 minutes – Mousehole substitute:  Mark Richards is replaced at the back by Tom Hands

The next 15 minutes: Godolphin’s keeper makes a series of six vital but scarcely believable saves with various parts of his body, much to the appreciation of the home crowd

To their great credit, Godolphin are conducting themselves in a sportsmanlike manner, and are working hard to probe some openings of their own.  A low cross from the right by Jacob Grange is just too far ahead of Ben Colquhoun in the centre.

84 minutes – GOAL for Mousehole:  ANDY ELCOCK shows his class and composure by finding the space in a crowded box to unleash an unstoppable shot into the top corner.  This is now the third consecutive match in which Godolphin have conceded seven goals.

Full Time (90+2):  Mousehole 8-0 Godolphin Atlantic. It’s another Mousehole clean sheet, bringing the season’s goal tally to a remarkable 38, with only four conceded.  The scoreline could well have been doubled but for the performance of Godolphin’s outstanding man-of-the-match keeper Dale England.

The three points put Jake Ash’s new league leaders two points ahead of Camelford and Dobwalls from the same number of games played, with the latter club the hosts on Saturday in a game that is arguably The Seagulls’ biggest test of this so-far impressive season.