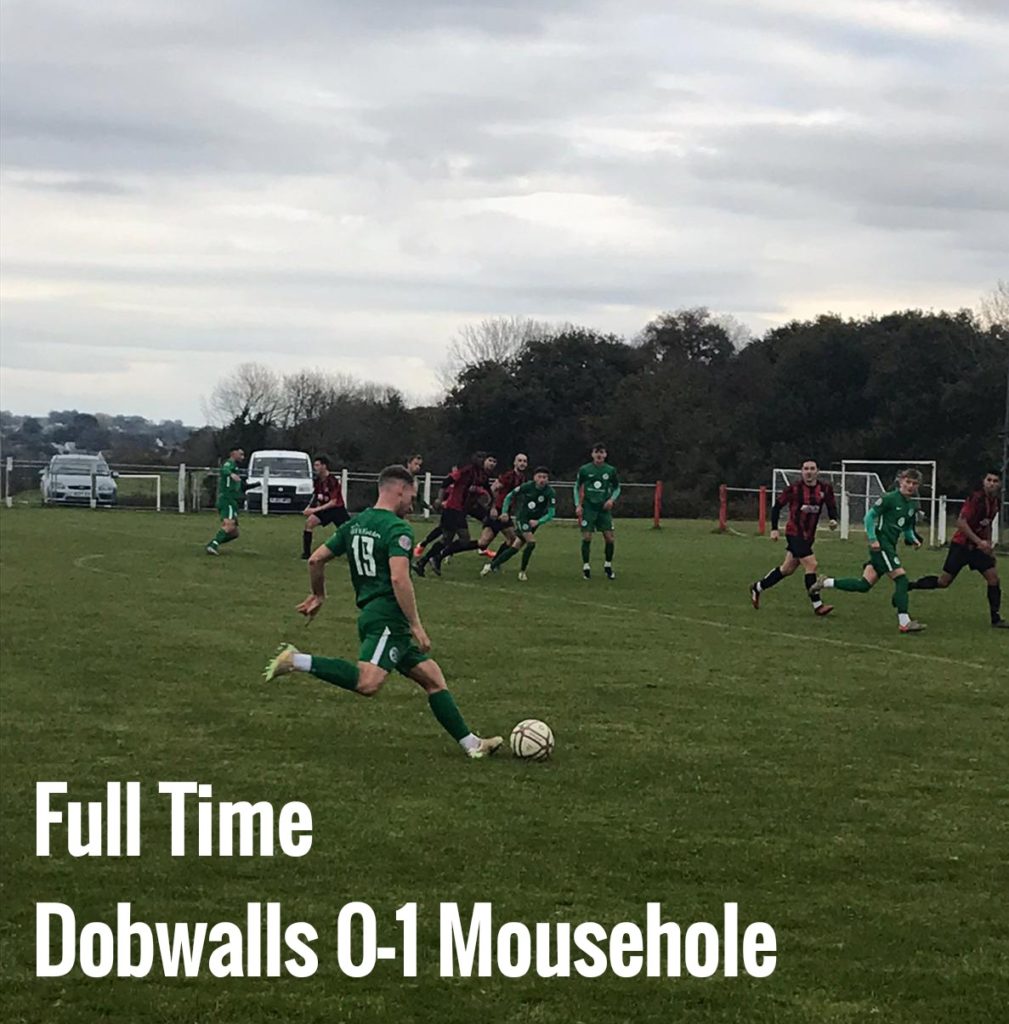 In their tenth league match, The Seagulls’ character, resilience and ball-playing philosophy shone through against a tough-tackling, energetic and direct Dobwalls side, and in so doing gained a precious three points to retain their leadership of the League with a quarter of the season played.

Dobwalls came into the match in an unexpectedly high third place having won seven and drawn one of their opening nine games, whereas Mousehole topped the table with eight wins from nine and a League’s-best goal tally of 38 against four.

The key moments of the match:

Lantoom Park has always been a difficult place to go to, and it’s no surprise as the hosts start the match with their customary uncompromising style, but Mousehole weather the early storm and begin to carve out space and chances with their own brand of quick pass-and-move football.

4, 13 and 41 minutes – three identical Mousehole moves:  Josh Magin gets down the right side and fires a low cross into the six-yard box, but with no-one on hand for a simple-looking tap-in as the ball zips past the far post each time.

14 and 25 minutes – Dobwalls shots:  bustling veteran Kelvin Fyneboy finds a bit of space to attempt a left-footer from a central position just inside the box but keeper Cory Harvey is perfectly placed to gather comfortably on both occasions.

Half-time score 0-0:  Mousehole need to continue in the same vein in the second half, but Dobwalls need different ideas.

50 minutes – GOAL for Mousehole:  TALLAN MITCHELL dashes forward alongside Josh Magin from halfway, bamboozles the last two defenders and accelerates to win the race with the advancing keeper to poke home from 15 yards.

Dobwalls are encouraged:  they are getting the ball upfield quickly to the front men, who look lively.

59 minutes – chance for Dobwalls:  Jamie Rowlands is in space inside the area on the left, but hurriedly scuffs his shot wide of the near post

69 minutes – chance for Mousehole:  Tallan Mitchell’s agility sees him clear on goal 30 yards out, but Bags Mariko brings him down, earning a bit of good fortune with only a yellow card.

72 minutes – very close for Dobwalls:  substitute Kevin McKallon’s brilliant overhead kick from 12 yards is destined for the corner,  until Cory Harvey pulls off an equally brilliant diving save to push the ball out for  corner – is this the moment that safeguards The Seagulls’ three points, or will Dobwalls rev up into another gear?

75 minutes – close for Mousehole:  The Seagulls are surviving the aerial bombardment and breaking quickly to create uncertainty in the Dobwalls back line:  Hayden Turner speeds clean through but a bobble sees him shoot over.

80 minutes – close again for Mousehole:  the tactics are working – Hayden Turner takes a quick shot as the home defence back-pedals, but it goes past the far post.

82 minutes – so close for Mousehole:  the game is very stretched – Jude Boyd has space to make a 30-yard run down the left and as he comes inside his right-foot shot from the angle of the box is deflected towards the far corner, but the alert Toby Chapman goes full length to push the ball out.

85 minutes – close for Mousehole:  Dobwalls are certainly playing with urgency, but they are giving the ball away too easily:  Mousehole’s defenders and midfielders are winning the ball back regularly and with quick passing to feet they are looking the more likely to score – Jude Boyd skilfully takes the ball to the byeline and sets up Hayden Turner in the middle but The Seagulls’ top scorer is crowded out.

90+3 Full Time:  A fully deserved Mousehole win on the balance of play.  Two teams equally competitive but with contrasting styles.  Dobwalls have had their moments, but The Seagulls have earned the right to play football their way.  Their overall qualities are illustrated by just four goals conceded in ten League matches and a fourth consecutive ‘clean sheet’, including in three away matches.

Manager Jake Ash views the opening quarter of the season with justifiable satisfaction:

“It was another good day today, playing against a really tough side. It was really obvious to see why Dobwalls have been successful this season, and it’s another game we’ve had to show we are multi-faceted and able to win in different ways.

That’s indicative of us this season, and it’s a huge credit to the players who started working hard as far back as April in order to be ready for the season whenever it started.  It’s no coincidence that we’ve started strongly because the boys were hitting their individualised targets that Gareth (Gareth O’Neill, Strength & Conditioning Coach) had set them, every week of every month of that lockdown.

I’m really proud of the players and the effort they put in.  There aren’t many teams at step 5/6 that ask their players to train twice a week, but at the moment the boys are getting their rewards for all that hard work.

It’s still very early in the season, but it’s a great start and we are all really excited about working even harder and the challenges ahead.”

The result gives table leaders Mousehole a two point current advantage over Camelford and three over both Liskeard Athletic and Falmouth Town, before the midweek fixtures, which see 12 teams in league action.

The Seagulls face a further test of their qualities with a trio of tough league fixtures against top-ten teams, starting with the visit of Wadebridge Town to Trungle Parc this Saturday (24th, 3pm), followed by an away match at Newquay on Wednesday 28th (7.30pm), and the important and intriguing encounter at major challengers Liskeard Athletic on Saturday 31st (3pm).