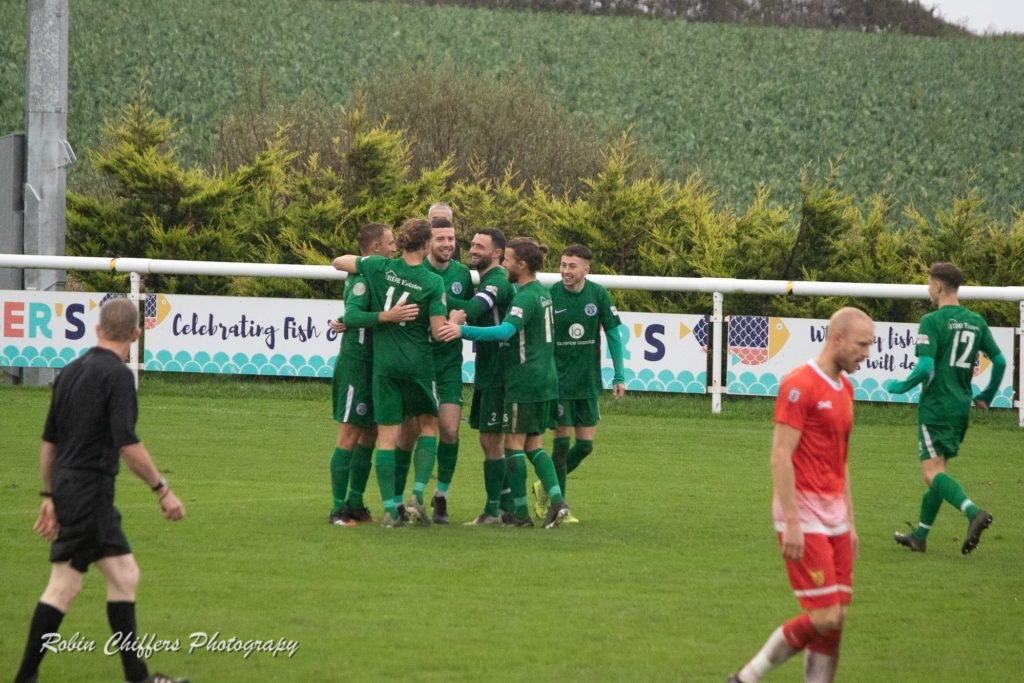 Mousehole did more than enough to earn the three points, hitting the woodwork three times, but had to settle for a draw on a very wet and windy afternoon.

The Seagulls have won five games in a row, conceding only one goal, and Kieran Toland is available on the bench after several weeks’ injury absence.  The Bridgers picked up an eye-catching 4-3 away win at much-fancied Liskeard Athletic in midweek.

8 minutes:  Mousehole close to taking the lead as Steve Burt just fails to touch in a low Josh Magin cross from the right

10 minutes:  A torrential downpour!  Lots of spray from ball and boots. Referee Richard Butler warns players about the danger of sliding tackles in these conditions.  Two minutes later the rain has eased, the surface water has disappeared and the pitch is playing fine.

14 minutes:  GOAL for Mousehole.  Josh Magin intercepts a sloppy Wadebridge free kick on the halfway line and slips a perfect through ball for HAYDEN TURNER to outpace his markers and prod the ball past advancing keeper Rob Rosevear for his 14th goal of the season

17 minutes: A threatening Wadebridge attack is wasted as a scuffed cross from close in on the left goes wide of the near post

26 minutes: More good approach play from the visitors with Jackson Penhallurick’s angled shot caught by Cory Harvey under the bar

30 minutes:  GOAL for Wadebridge.  The equaliser that has been looking likely for a while arrives as MATT LLOYD gets ahead of the pack to steer a strong header into the net from the edge of the six-yard box as Mousehole give away a corner on the right-hand side

33 minutes:  Cory Harvey keeps the home side level with a superb one-on-one block to deny Matt Lloyd after The Bridgers make a swift four-man break from Mousehole’s own corner at the other end

35 minutes:  Back come Mousehole with Paulo Sousa surging upfield and supplying an inside pass, but Hayden Turner’s left-foot shot hits the far post and bounces to safety

45+1 minutes:  Wadebridge’s turn – Jacob Smale gains possession deep in The Seagulls’ half but his cross in front of goal is cut out at the last moment

48 minutes:  A great run by Jude Boyd on the left gives Hayden Turner a half-chance but he side-foots wide at the near post

51 minutes:  GOAL for Mousehole.  Hayden Turner lays the ball off cleverly in a crowded box for KIERAN TOLAND (sponsored by RDR ESTATES) to drive low into the net just five minutes after coming on from the bench

57 minutes:  The Seagulls are well on top, with Hayden Turner just kept out by last-ditch defending after an incisive break on the right

59 minutes:  A double let-off for Wadebridge as Josh Magin and Hayden Turner both fail to convert from close range after a defence-splitting move on the left

61 minutes:  GOAL for Wadebridge.  They have been under huge pressure since the interval but are generously gifted another equaliser, Cory Harvey and Paulo Sousa getting themselves into a mix-up after an innocuous forward pass, leaving JACOB SMALE to score into an unguarded net from 15 yards

72 minutes:  The Bridgers have been making the most of their good fortune, but at last Mousehole make some headway and Rob Rosevear does well to parry Hayden Turner’s fierce goalbound drive

73 minutes:  The Seagulls seem re-energised and Rosevear is forced into a sprawling save to keep out Josh Magin’s 20-yard volley

81 minutes:  The hosts are increasing the momentum.  A swift passing move puts Kian Burns through on the left, but Rosevear blocks the shot and is relieved to see the loose ball fired into the side netting

85 minutes:  Another double let-off for Wadebridge.  Kian Burns shoots against the left-hand post from inside the six-yard box, Tallan Mitchell fires the rebound against the other post, and the defenders scoop the ball off the line.  Fine margins – and not Mousehole’s day!

90+2: Full-time – it’s 2-2 and Mousehole’s first League draw of the season.  A very watchable game in difficult conditions by two entertaining and positive-thinking teams.

Despite dropping two points, Mousehole remain in first place in the table by virtue of a far superior goal difference over Camelford and Dobwalls on the same number of points.  The next week will be a real test for Jake Ash’s squad with two away games in four days at Newquay and Liskeard Athletic, before the re-arranged home fixture against St Dennis on Tuesday 3rd November..