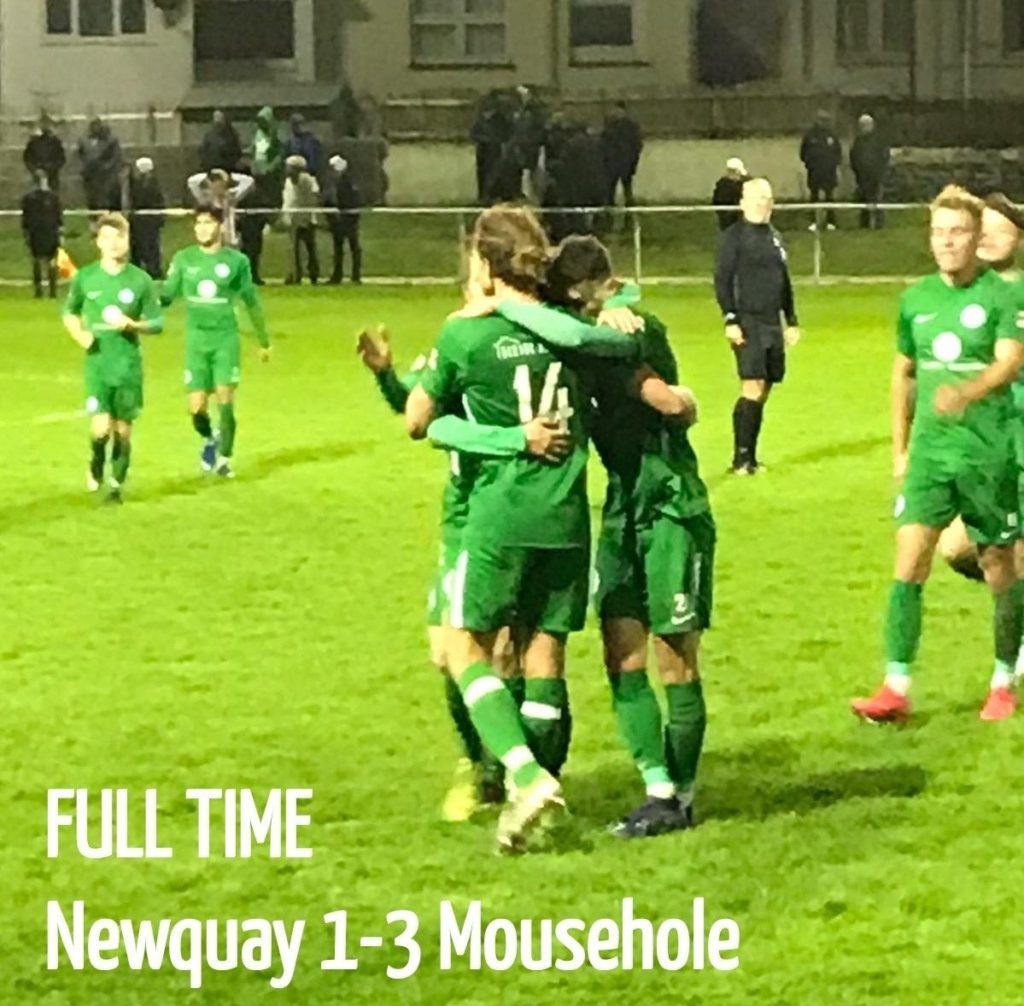 The Seagulls earned their tenth win in twelve league games to go three points clear a the top of the table, but they had to show loads of resolve to battle the wind-swept conditions and a strong second-half showing from The Peppermints.

Both teams will be looking to recover after unexpectedly dropping points in their previous games, with Newquay’s 4-4 draw at lowly Sticker and Mousehole’s 2-2 at home to Wadebridge Town.  Newquay have had some impressive results against high-flying teams, including a win at Saltash United and draws at Camelford, Dobwalls and Helston Athletic.

There’s a strong wind blowing down the Mount Wise pitch and Newquay have it behind them in the first half.

1 minute:  Mousehole are on the offensive from the start as Paulo Sousa’s well-struck 25-yard drive bounces off keeper Harry Ashdown, but Kieran Toland is flagged offside as closes in on the rebound in front of goal.

4 minutes:  GOAL for Mousehole.  Centre-back MARK RICHARDS starts and finishes the move, chipping a pass into space on the right hand side and then arriving at the back post to tap in Josh Magin’s trademark low cross along the six-yard line.

20 minutes:  close to a second goal as Josh Magin sets up Hayden Turner for a one-on-one with Ashdown but the striker fires wide of the near post.

28 minutes:  Kieran Toland’s free kick from the right ricochets around the six yard box before Ashdown grabs the loose ball.

30 minutes:  close again, Kieran Toland’s 20-yarder is pushed out into the danger area by the busy Ashdown, but there’s no-one on hand to finish it off.

Half an hour gone:  Mousehole are on top, playing some classy football and looking likely to fashion more chances.

35 minutes:  Jude Boyd’s turn and close control take him superbly past two defenders inside the box on the left, but he can’t quite find Hayden Turner lurking inside.

39 minutes:  A quick break puts Hayden Turner in with a shooting chance from 15 yards but the ball misses the far post.

43 minutes:  Close for Newquay.  After dominating the first half, Mousehole nearly concede – Louis Price is one-on-one with Cory Harvey, the keeper bravely blocks, the ball spins up towards goal and is scrambled off the line.  Harvey is injured in the collision and receives three minutes of on-field treatment before play continues.

45+4:  Half time score Newquay 0-1 Mousehole.  A first period with plenty of incident, including bursts of torrential rain.

50 minutes:  Louis Price has a shot for Newquay from 20 yards, straight at keeper Cory Harvey.

61 minutes:  Mousehole hit the woodwork – Josh Magin’s 25-yard volley from a central position strikes the underside of the bar with Ashdown beaten, and the ball bounces down in front of the line before being cleared to safety.

65 minutes:  GOAL for Mousehole. HAYDEN TURNER makes it 2-0 after being put through on the left by a cute pass by Jude Boyd, and as the striker, keeper and defender all converge the ball squirms into the empty net.

67 minutes:  GOAL for Newquay – Alex Cole converts from the penalty spot following a mis-timed tackle by Billy Curtis on Price as he turns in the box.

70 minutes:  Newquay have upped a gear and their pressing in midfield is causing Mousehole to lose possession too frequently

71 minutes:  Gosling’s shot from outside the box is straight at keeper Harvey.

80 minutes:  The Seagulls are under pressure but have a rare sight of goal as Hayden Turner swerves the ball just past the angle from 20 yards.

Sensing they might get something from this game, Newquay are energetic and eager, but in truth they’re not doing much with the ball when they get into the box – Mousehole’s defence is steadfast and watertight (despite the weather!), and Cory Harvey has few alarms to deal with.

89 minutes:  GOAL for Mousehole – HAYDEN TURNER breaks Peppermints’ hearts, coming in from the right to hammer an unstoppable left-foot drive into the top far corner from 18 yards.  That surely clinches the three points.  And it’s his 16th goal of the season.

90+3:  Full-time Newquay 1-3 Mousehole – a see-sawing second half with The Seagulls having to show character and persistence both in defence and attack.  Newquay have been in inconsistent form this season but on this performance they are much better than their current mid-table position suggests.

Jake Ash’s side lead the table by three points and travel this Saturday to seventh-place Liskeard Athletic, who are seven points behind but have a game in hand.