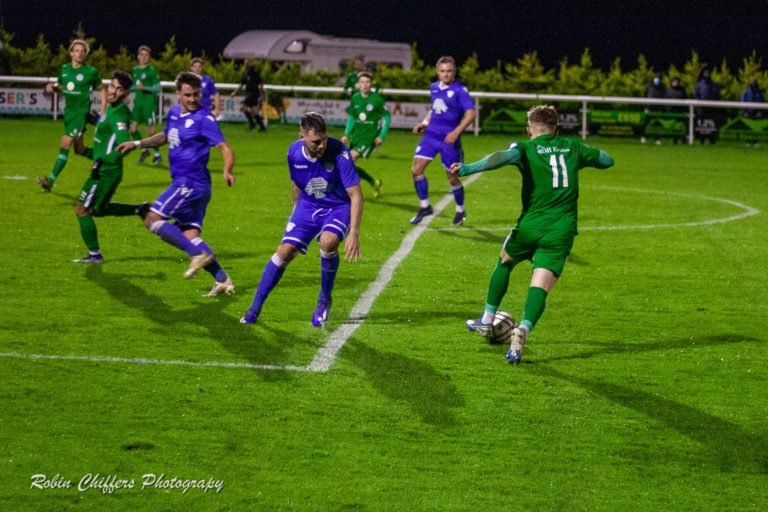 In front of another sizeable crowd, League leaders Mousehole put in an impressive performance to increase the gap at the top to six points, with just over a third of their League fixtures completed, ahead of the Government’s newly imposed  four-week lockdown.

9 minutes:  Mousehole have made a positive start on the quick wet surface, with Jude Boyd making a brilliant twisting run from halfway on the left, and has low inside pass is side-footed wide of the near post by Hayden Turner on the edge of the six-yard box

10 minutes:  The attacking momentum continues and Josh Magin is clear one-on-one but his shot from inside the area hits keeper Dan Peters and is cleared

16 minutes:  Peters is called into action again, blocking Hayden Turner as the striker outpaces the defence to create the chance for himself

18 minutes:  GOAL for Mousehole:  HAYDEN TURNER repeats the exact move and this time fires a right-footer from just inside the area low into the far corner for his 17th goal of the season

26 minutes:  Josh Magin is so close to getting his first goal in a Mousehole shirt as his deflected shot skims just past the post with keeper Peters beaten

27 minutes:  Kieran Toland turns on the edge of the area and drives a rising shot millimetres wide of the far angle

29 minutes:  Josh Magin is close again, his left-foot shot striking the base of the post and rebounding to safety

30 minutes:  Half an hour gone and it’s all Mousehole – but only one goal to show for it

31 minutes:  St Dennis have a chance from a disputed free kick in a central position 20 yards out, but Luke Johnson’s fierce shot is blocked by the defensive wall

33 minutes:  Back come Mousehole and Josh Magin’s low cross from the right gives Hayden Turner a chance in front of goal but his shot bounces off keeper Peters

38 minutes:  Josh Magin is foiled again as Peters comes out to smother the chance

Half-time:  Mousehole 1-0 St Dennis – An improbable scoreline on the balance of play, but The Saints are defending valiantly, almost a lockdown in itself!

47 minutes:  It’s the same pattern at the start of the second half – Jude Boyd comes in from the left to let go a right-footer aimed at the far corner, but Peters goes full-length to palm the ball away

51 minutes:  Josh Magin is yet again scenting a goal, scooping a left-foot shot over from the middle of the box after Peters pushes out Hayden Turner’s cross from the left

56 minutes:  GOAL for JOSH MAGIN, slotting home a loose ball, and the visitors’ resistance is at last broken – great work again by Jude Boyd on the left whose low cross wrong-foots the defence

60 minutes:  Josh Magin’s in the mood for another goal, his angled shot forcing Peters into another diving save

64 minutes:  GOAL for Mousehole to make it 3-0 – Tallan Mitchell floats a pass over to JOSH MAGIN on the far side of the six-yard box and his shot ricochets over the line via one of the covering defenders in front of the keeper.  Maybe an Own Goal, but the wingman deserves a second goal anyway!

65 minutes:  Luke Johnson looks keen to make an impact against his former club  but is booked by referee D’Arcy after a series of over-aggressive challenges, and is shortly afterwards substituted

70 minutes:  Mousehole substitutes – Jude Boyd is replaced by Jamie Devine and Andy Elcock by Steve Burt, with Paulo Sousa moving up to left wing and Josh Otto across to left back

76 minutes: A spectacular moment as Hayden Turner curls towards the top corner from 20 yards and Peters makes a flying save to claw the ball out

84 minutes:  Play is stopped for several minutes after a 50/50 challenge between Kian Burns and Lee Rickard leaves the Saints’ man injured and unable to continue.  St Dennis are left to finish the game with ten men after already using all three substitutes.

89 minutes:  The ten men have a great chance as their top scorer Jacob Rowe, having battled away gamely up front throughout the match, is suddenly through but shoots wide from 15 yards with only keeper Cory Harvey to beat

90+5:  Captain Billy Curtis is raiding upfield but is denied a rare goal when his close-range shot is blocked by more gallant defending

With no more games scheduled until at least the beginning of December, Mousehole can be more than satisfied with the season so far, as they sit six points ahead at the top of the League with a superior goal difference over all their rivals having now scored 47 goals and conceded just seven, with eleven wins and eight ‘clean sheets’ in 13 fixtures.

Attendance:  147 Next fixtures:  If the SWPL resumes in early December – and if the fixture list remains as at present – Mousehole will have two consecutive home matches: on Saturday 5th December v Launceston, and Saturday 12th v St Austell, both 3pm kick-offs.