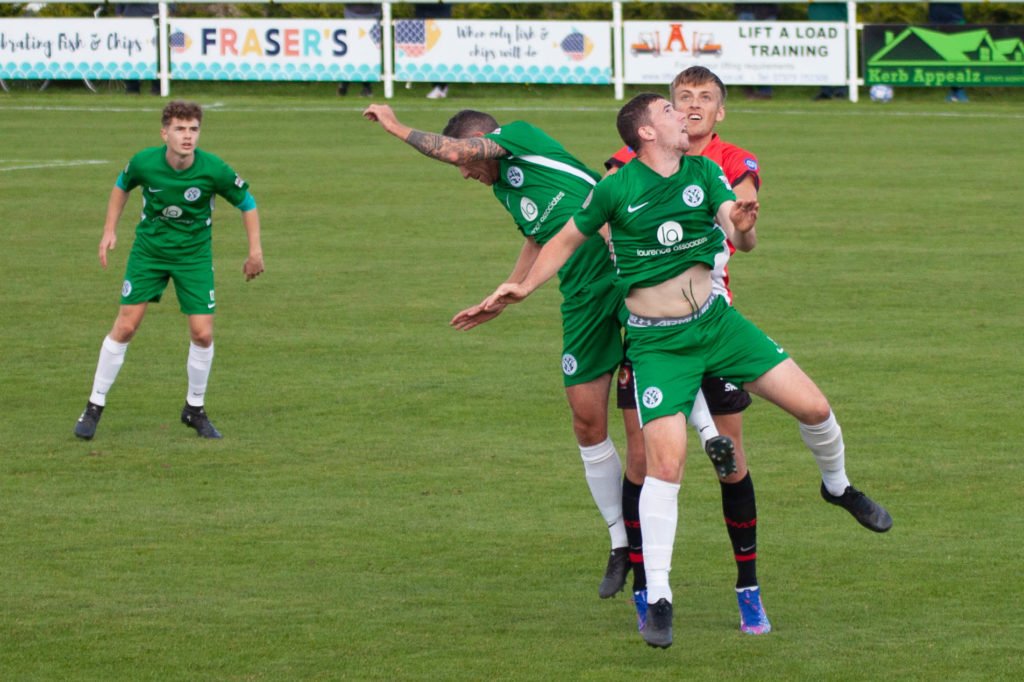 Mousehole’s maximum-points start to the season came to an end as they were edged out in a hard-fought encounter against arguably the best team they have faced so far.  The Seagulls had convincingly won all four of their League matches with an aggregate score of 23 goals against one, but The Ashes had won six of their opening seven games, including three FA Cup victories against higher-league opposition.

12 minutes – Close for Mousehole:  Josh Magin fashions a chance for himself with a run from the right, but having brought the ball on to his left foot and with only keeper Ryan Rickard to beat, the wingman fires over the bar from 8 yards

39 minutes – GOAL FOR MOUSEHOLE:  KIERAN TOLAND (sponsored by RDR Estates) runs across the defence line to touch home Josh Magin’s perfect low cross to the near post for a lead they have worked really hard for.

41 minutes – Close for Mousehole:  Hayden Turner just loses out in a one-on-one race with keeper Rickard

45+3 minutes – GOAL FOR SALTASH:  With seconds remaining, Mousehole squander their lead, an unforced error on halfway giving the visitors the chance to counter-attack with an immediate ball down the right and a quick inside pass leaving BEN HOLTER free on six yards, and his shot squirms under Corey Harvey for an equaliser: their only threat in the first half and a potential psychological advantage at the interval.

50 minutes – close again for Saltash:  The visitors are making a strong start to the second half.  Cory Harvey just about keeps out Reece Thomson’s effort and the resulting corner flashes past the far post, needing only a touch from the Ashes’ big defenders.

59 minutes – GOAL FOR SALTASH:  REECE THOMSON gives the visitors a 2-1 lead, turning his marker easily on the edge of the box and firing a right-footer low into the corner past Cory Harvey’s dive, a goal that had been looking likely since the resumption.

66 minutes – Close for Saltash:  Reece Tomson loses out to Cory Harvey in a one-on-one chase

75 minutes – Pattern of play:  Saltash are resolutely defending their lead with a five-man back line and energetic tracking-back, denying Mousehole space in the final third;  The Seagulls are being forced to play across the pitch; keeper Rickard is being well protected and has nothing serious to deal with.

87 minutes – Chance for Mousehole:  patient play on the left gives Paulo Sousa a clear sight of goal but he scuffs wide from 10 yards with his usually reliable left foot

90+4 – Full-time whistle and Saltash celebrate their 2-1 win with obvious delight.

Mousehole are in 4th place in the early League table, and will be looking to get back on track this Saturday (3rd October) with the visit of Bodmin Town (3pm), who face bottom club Launceston at home on Wednesday.  Newquay, Saltash and new leaders Camelford are now the only unbeaten teams, with the latter two facing each other in midweek before The Ashes’ home FA Cup Second Qualifying Round tie against Southern League Sholing on Saturday.