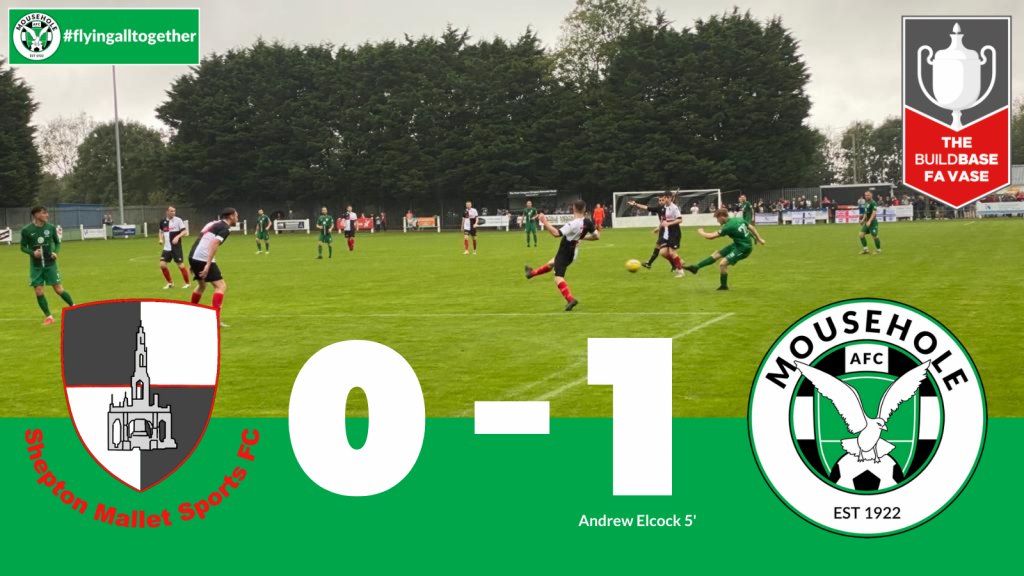 A single early goal and a  resolute 10-men last half-hour enabled Mousehole to progress to their highest-ever level of national cup competition with a season’s-best performance of skill, organisation and character at the home of the much-fancied Shepton Mallet.

In the Western League Premier, Shepton Mallet stand six points ahead of Mousehole from one game more.  They are the only unbeaten side in the Division, having conceded just two goals in nine matches this season and none at all at home, a record that recently earned them the League’s ’Team of the Month’ award.

Mousehole are arguably the underdogs, and face an added challenge without keeper Cory Harvey (illness), Sean Roberts and Josh Otto (both injured) and Josh Magin (unavailable), but they are on an encouraging run of three consecutive League wins.  Jimmy Weeks from Tiverton Town takes over in goal and Manager Jake Ash names four substitutes.

The Mallets in their current guise- re-forming in the mid-1980s after leaving the WLP two years earlier – have risen from the second tier of the Somerset County League back to the WLP in 2014/15.  They reached today’s stage of this season’s FA Vase with a 1-0 win at fellow WLP side Exmouth Town in the First Qualifying Round, while The Seagulls had a bye.

The weather is on-and-off drizzly, The Mallets are in their traditional black and white quarters, The Seagulls are in their customary dark green, the stadium is neat and tidy, the hosts’ welcome and hospitality are first class, and the pitch, although sloping, is in pristine condition – a near-perfect afternoon for football.

As it happened – the key points of the match

Mousehole are kicking up the slope in the first half.

5 minutes:  GOAL FOR MOUSEHOLE.  A slick exchange of passes between Callam Mconie and Mark Goldsworthy enables the latter to slip the ball through a gap in the penalty area to the left of centre for ANDY ELCOCK to run in and coolly slide the ball low past advancing keeper Tom Easterbrook from 12 yards.  A brilliantly worked goal against a team that rarely concedes.  Shepton Mallet 0-1 Mousehole.

Halfway through the first half.  Mousehole are playing with composure and confidence.

33 minutes:  The home side have been playing in ’fits and starts’ but they come close with a header from a corner into a packed six-yard box, the ball appearing to come back off the post before being cleared to safety

40 minutes:  Mousehole are enjoying a good amount of possession and constantly threatening the home side’s back line

45 minutes:  Shepton again employ their aerial tactics, an inswinging free-kick finding Jack Fillingham, whose header from 15 yards bounces down and over the bar

45+1 minutes: A swerving shot by Mallets’ Callum Gould from 20 yards is well judged and collected by keeper Jimmy Weeks

45+3 minutes:  Half time score 0-1.  Mousehole in the lead and in control.  The Mallets will have to step it up in the second half to get anything from this game.  Will the second half prove that Mousehole’s Vase is half full or half empty?

49 minutes:  Shepton send in a dangerous-looking free-kick from the right towards the far post but it evades everybody and goes  out for a goal kick

54 minutes:  Almost 2-0!  The hard-working Mark Goldsworthy robs his marker deep into Mallets’ territory and squares the ball for Tallan Mitchell who looks certain to score at the far post, but keeper Easterbrook makes an alert save to snuff out the chance

58 minutes:  Callum Gould picks up Jimmy Weeks’ kick out and tries an instant lob from 40 yards, but the ball drifts wide with the keeper quickly back to cover

62 minutes:  Controversial incident!  Red card – Mousehole down to ten men.  Two Shepton players converge heavily on Tallan Mitchell as he twists and turns with the ball out wide on the half-way line.  With all three on the ground there’s a skirmish, more players pile in and, after consulting his Assistant, Referee Bromham sends off the Mousehole midfielder and after a further delay issues a yellow card to Shepton’s Jack Fillingham.  Mousehole not entirely happy.

68 minutes:  Shepton now have the perfect opportunity to get back in the game, but it’s Mousehole who have the next chance, Billy Curtis’ curling cross just out of reach of Hayden Turner in front of goal

71 minutes:  The Mallets waste a good chance, full back Joel Sisson racing upfield into space but firing past the near angle when well placed

72 minutes:  Mousehole substitute – Mark Goldsworthy is replaced by Jacob Grange, who goes into a left-sided wing back position with Hayden Turner moving centrally

74 minutes:  Hayden Turner’s pace is causing the centre backs some anxiety – he can’t quite line up his shot inside the box

Ten minutes to go:  Shepton are pumping high balls into the box at every opportunity, but Mousehole’s defensive formation is dealing with everything, with keeper Jimmy Weeks inspiring confidence with his handling, anticipation and verbal instructions

83 minutes: Mousehole are not afraid to come forward – Paulo Sousa travels with the ball and feeds Kyle Fraser, whose shot is pushed out for a corner by the diving Easterbrook

90 minutes:  Mousehole exploit space at the back, giving the unmarked Jacob Grange a great chance to make the game safe, but his shot goes wide of the near post

90+1 minutes: More aerial bombardment as the hosts try to take the tie to a penalty shoot out, but Mousehole’s superb organisation and determination at the back are effective, and there’s no real danger

90+2 minutes:  Another Mousehole chance.  Hayden Turner has been keeping the home defence busy, so they only have a chance to join the attack from free kicks and corners – this time he’s first to a bouncing ball down the and has the pace to get to it before Easterbrook, but his lob over the keeper misses the far post

90+3 minutes:  Probably the last move of the match.  A home corner is delivered into heavy traffic in the six yard box, but there’s too much pushing by the big Shepton players for the Referee’s liking, and Jimmy Weeks takes special care to place the free kick in the right position.

90+4 minutes:  At full-time it’s Shepton Mallet 0-1 Mousehole.  A fourth Seagulls’ win in a row, and a good example of the resilience manager Jake Ash expects.  An eye-catching but fully deserved result puts The Seagulls into the next round*.

Draw for the FA Vase First Round Proper, to be played on Saturday 23rd October:

– Currently they are mid-table in Division One (Step 6) with 4 wins, 4 draws and 4 defeats

Next fixture for Mousehole:  Two games in quick succession against Saltash United