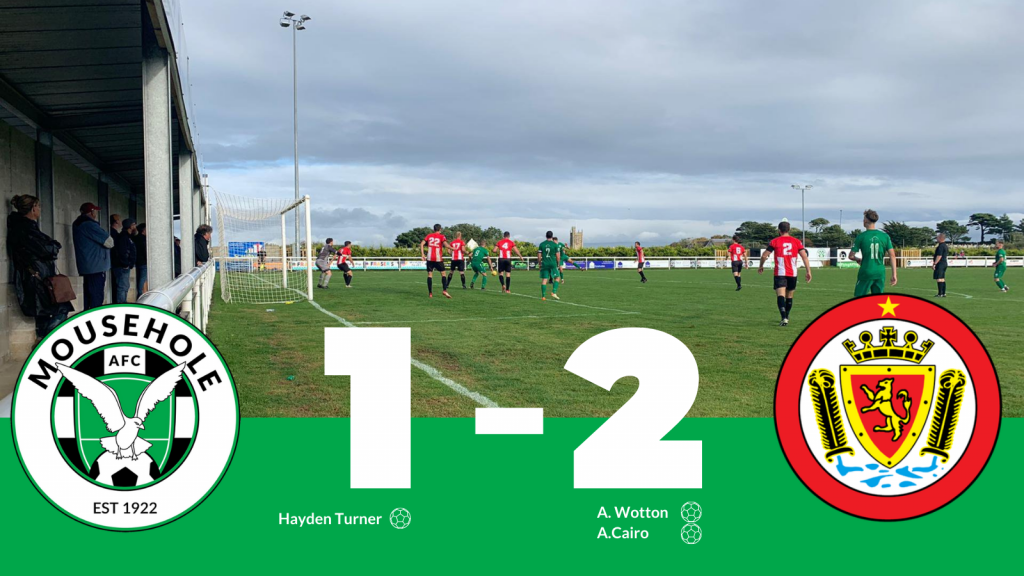 After a great run of four consecutive wins, Mousehole came up against Saltash United in the First Round of the Senior Cup, but didn’t have enough to overcome a strong performance by the visitors, who continued their historic success in Cornwall’s premier cup competition.

Mousehole have won their last four matches, including a stunning away win in the FA Vase at Shepton Mallet last Saturday, but today they’re without Tallan Mitchell (suspended), and Sean Roberts and Josh Otto (injured), while recent signing Connor Leak-Blunt is in the starting line-up

Fellow-promoted side Saltash United have made a good start to life in the Western League Premier Division with five wins and three draws from their opening ten fixtures, and stand five points above The Seagulls from two games more.

The Ashes are one of the most prolific winners of the Cornwall Senior Cup.  Coincidentally, they beat Mousehole – who were then two steps below where they are now – by a narrow 3-2 margin in 2018’s Final.  Because of previous Covid restrictions, today’s Senior Cup ties are the first to be played for over a year and a half.

The weather is wet overhead and under foot, but perfectly suited to two football-playing sides

THE MATCH AS IT HAPPENED:

Mousehole are kicking towards the Cricket Club end.

9 minutes:  Kyle Fraser comes in from his right-wing position for Mousehole and tries a low left-footer from 20 yards, but it skims wide

13 minutes:  Hayden Turner does a repeat, but it too misses the upright

18 minutes:  Closer for Mousehole.  Mark Goldsworthy’s shot is blocked in the area, Hayden Turner picks up the loose ball to the left of goal, but drives into the side netting

37 minutes:  A rainbow appears, a slightly faded one.  The Ashes are getting on top.  A driven right-wing cross skids across goal inside the six yard box and out for a goal kick.

41 minutes:  Dramatic moment!  Saltash have a free kick on the edge of the ‘D’.  Chris Menhenick hammers a huge left-foot shot towards the far top corner, but somehow Cory Harvey makes a wonderful flying save to tip the ball onto the bar……and it’s hacked away from danger.

44 minutes:  Another driven Menhenick free kick from the right-hand edge of the box is bravely cleared by Jamie Devine

45+1 minutes:  Left-back Alfie Wotton has the clearest chance of the half from a careful lay-back by Reece Thompson, but shoots way over the bar from 10 yards

45+3 minutes:  At half-time it’s 0-0.  Mousehole started well but Saltash have gradually controlled the possession, stifled the home side’s forward movement, and created the better of the goal chances.

46 minutes:  Mousehole substitute – the injured Mark Richards is replaced at the start of the second half by Max Hill, making a first appearance in his second spell with The Seagulls

48 minutes:  The Ashes look purposeful going forward as the sun comes fully out.  Sam Hughes turns just inside the area but scuffs his shot straight at Cory Harvey.

51 minutes:  GOAL FOR SALTASH.  It’s not a surprise.  Quick inter-passing puts Reece Thompson into clear space on the left of goal and his low inside pass is touched over the line from a few yards out by ALFIE WOTTON who’s got himself forward into a great position.  Mousehole protest in vain at the lack of an offside flag.

56 minutes:  A half-chance for The Seagulls as Hayden Turner’s trademark low left-wing cross is met by Kyle Fraser, but his shot from six yards is blocked.

57 minutes:  At the other end, keeper Cory Harvey misdirects a pass out, giving Sam Hughes a golden opportunity from 18 yards, but he hurriedly fires over the bar with the keeper not yet back in position

58 minutes:  Mousehole substitute – Kyle Fraser is replaced by Josh Magin on the right side going forward

60 minutes:  Paulo Sousa makes a positive run on the left but Mark Goldsworthy can’t get close enough to his dangerous cross

63 minutes:  Hayden Turner makes space for a shot from the edge of the box but it’s a comfortable save for keeper Ryan Rickard

64 minutes:  Connor Leak-Blunt leads a quick Mousehole break from midfield, putting Hayden Turner in with a sight of goal, but Dave Barker does a captain’s job in getting back to block the shot for a corner

66 minutes:  Mousehole’s best period of the match ends with the visitors having two chances in quick succession, with a goalbound shot blocked for a corner and a shot driven wide as the corner runs loose

68 minutes:  Mark Goldsworthy makes a determined run on the right and puts in an inviting cross towards the far post, but Dave Barker yet again reads the situation well and calmly side-foots the ball out for a corner

72 minutes:  GOAL FOR SALTASH.  ALEX CAIRO has space to run at a retreating defence and his shot from 20 yards zips low into the corner of the net with the aid of a deflection past Cory Harvey’s full-length dive.  Mousehole 0-2 Saltash United.  About 20 minutes to go – what now?

74 minutes:  Mousehole substitute – right-back Billy Curtis is replaced by Jacob Grange in an advanced left-sided position, as The Seagulls opt for a four-man attack with Hayden Turner moving towards the centre

82 minutes:  A quick Ashes breakaway – Reece Thompson hits the post.  Close to making the game safe for the visitors.

84 minutes:  Hayden Turner’s cross is cleared by solid Saltash defending, but only just

85 minutes:  Missed chance for Mousehole.  Hayden Turner’s adept touch gives Jacob Grange a clear chance from 8 yards to the left of centre, but he shoots with his left foot and it goes across goal and away from danger

90 minutes:  GOAL FOR MOUSEHOLE.  Chris Menhenick under-hits a back pass, putting HAYDEN TURNER in on goal and he smoothly slides the ball past Rickard into the far corner from 15 yards.  Is it merely a consolation, or can The Seagulls force extra time from the dying embers of the match?

90+5 minutes:  Full time.  Mousehole 1-2 Saltash United.  The Seagulls are out of the Senior Cup at the first hurdle, but it’s no disgrace to lose to arguably the best team they’ve faced so far this season.

It’s Saltash United again in midweek, on Wednesday 6th October  – this time away at Kimberley Stadium (PL12 6DX), in the Western League Premier, kick off 7.30pm

On Saturday, 9th October, away at Bridgwater United (Fairfax Park, TA6 4TZ) in the WLP, kick off 3pm.