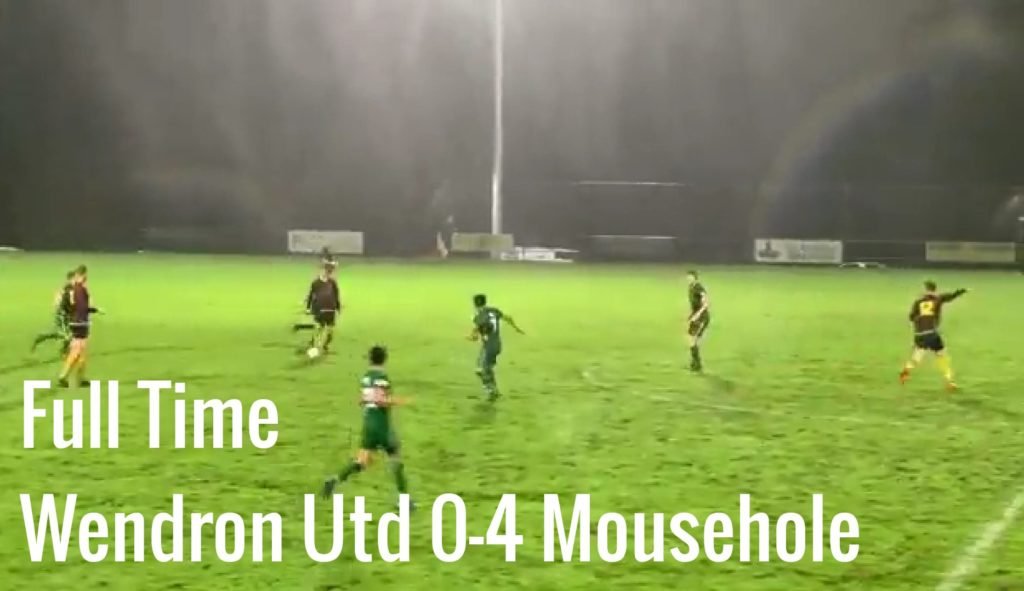 In driving rain, high winds and an increasingly soggy pitch, Mousehole showed great character to master the elements and get back on track after seeing their long unbeaten league run ended at Helston Athletic last week.

This was The Seagulls’ first game under The Dron’s impressive new floodlights, and the drenched crowd saw a match full of endeavour which did great credit to both sides.

After two early goals, Mousehole soaked up a promising spell of pressure by the hard-working hosts and then pounced for another, to give them a comfortable-looking three goal half-time lead.

Gerens James nudged in Mark Richards’ 15-yard on-target header from a Rheiss McClean left-sided free kick in the 8th minute, and Kieran Toland converted a penalty on 16 minutes after James had been fouled in the act of shooting.

A winning tackle by Steve Burt on his own 18-yard line and a quick short pass by Mark Richards saw Amara Bakayoko outpace his marker on halfway to create a one-on-one chance with keeper Dan Steadman, the ball falling to Rheiss McClean who took it round the keeper to fire into the empty net in the 33rd minute.

The second period saw plenty of mistakes and half-chances in the deteriorating conditions, but Kieran Toland showed his class by outwitting the defence with great balance and a deft touch on the tricky surface, before planting a pinpoint low shot into the far corner from 18 yards in the 72nd minute.

So, three important points, from an efficient performance with a clinical cutting edge, keeps Mousehole in the leading pack of five teams, with a sizeable gap opening up with the teams behind.

*The Seagulls’ next match is at Dobwalls this Saturday (19th, 3pm), with the Lantoom Park outfit sure to provide their customary tough challenge.

*Next Friday (25th) sees the ‘big switch on’ as Mousehole play their very first floodlit game at Trungle Parc, a League Cup second round tie against Porthleven.  Kick off is at 7.30pm, but with a large crowd expected at this special occasion, and various pre-match events planned, spectators are advised to arrive early.

*In the draw for the third round of the Cornwall Senior Cup – the stage at which Step 6 teams enter the competition – Mousehole will visit Sticker on Saturday 9th November, with a 2pm kick off.