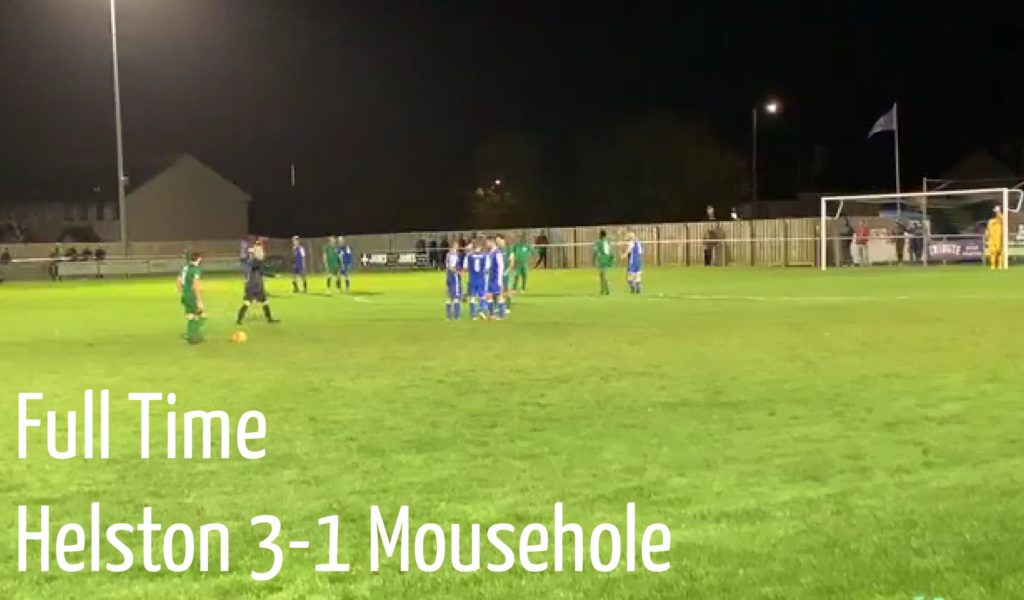 Mousehole’s long unbeaten record – no league defeats since Boxing Day last year, together with 12 league and two Cup games without loss in the new season after promotion – finally came to an end as they conceded three goals after taking an early lead.

To lose to a Helston side looking for their 13th consecutive win is no disgrace, but the manner of the defeat will be a cause for concern.

The hosts, after a slow start, showed no signs of taking it easy ahead of their big FA Vase ‘derby’ against Falmouth Town on Saturday, and the robust and high-intensity way they then went about their business turned out to be the main difference between the two sides.

The game unfolded in sharp contrast to The Seagulls’ encounter on Saturday with Saltash United, in which they were second-best for the first half hour but then recovered to dominate their opponents.  At Helston, the reverse was true.

From the start, Mousehole were quickly on the offensive, and might have scored more than the goal by Lez Cela, an accurate low shot from the edge of the penalty area in the 16th minute.

But then Helston started to close down the space in midfield, all too frequently catching Mousehole in possession, and then driving forward with their own quick direct style.  And that remained the pattern for much of the rest of the game, with all three of the hosts’ goals resulting from Seagulls’ mistakes.

By the half hour, Helston were already getting on top and looking threatening.  Keeper Corey Harvey had to beat out Neil Slateford’s free kick at his near post before the equaliser came on 39 minutes when youngster Cameron Wheat – a promising winger at Wendron United, now deployed as a full back at Helston – was given too much time and space to whip in a fierce 18-yard shot.  Harvey parried the ball out but top scorer Mark Goldsworthy was the quickest to react and netted from close range.

Helston’s continuing second half pressure made a second goal seem probable, and it came when Billy Tucker took a very quick throw-in deep in Mousehole territory, releasing Neil Slateford for an unopposed run in from the right to score from a narrow angle on 58 minutes.

And the third goal which clinched the win, and moved The Blues up to second place in the table, was a simple affair, Tucker swinging in a free kick and the unmarked Wheat heading home from six yards in the 79th minute.

Mousehole had created several goal-scoring chances earlier in the match which might have provided a more comfortable cushion.  On 7 minutes Kieran Toland’s back-header was dropped over his own line by ex-Seagull keeper Jason Robertson under pressure, only for referee Nigel D’Arcy to penalise Gerens James for the challenge.  Robertson then blocked Toland’s angled drive from close-in on 11 minutes, and shortly afterwards went full length to divert Rheiss McClean’s 15-yard drive round the post on 12.  Two minutes later Toland shot wide of the far post with a clear sight of goal after a great turn at speed inside the box.

In the second half, chances for The Seagulls were few and far between.  Billy Curtis just missed the angle of the woodwork with a cross shot on 51 minutes, and Toland’s 30-yard lob towards an unattended goal was deflected after Robertson had raced out to half-clear a through ball inside added time.

Looking quickly to get back on track and maintain their top-five position, Mousehole now have another three away league fixtures in a row against teams who also came up from Division One West this season.

Tomorrow, Saturday 12th, it’s a return visit to Wadebridge Town’s Bodieve Park (3pm), the site of The Seagulls’ 7-2 victory a few weeks ago in the League Cup.

Then comes the short trip to Wendron United next Tuesday (15th) for a 7.30pm kick off under the new floodlights at The Underlane.

Following that, the destination is Lantoom Park to face Dobwalls on Saturday 19th October (3pm).

The month ends with the eagerly-awaited first-ever floodlit home match on Friday 25th October against Porthleven in the League Cup (7.30pm).