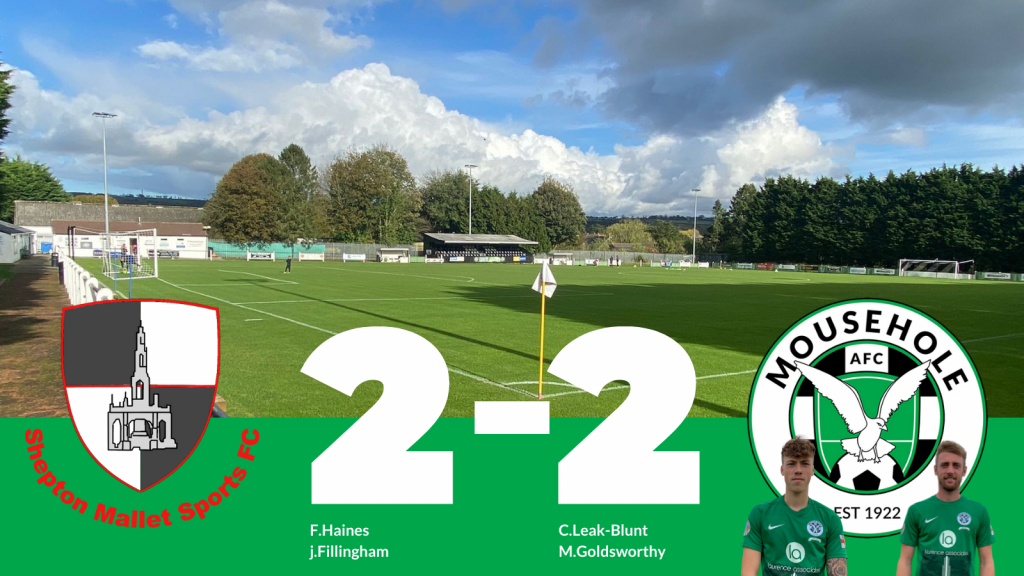 The Seagulls scored early in each half to record their second League draw of the season, with a resolute performance preventing The Mallet from delivering the hammer blow to avenge their FA Vase defeat last month.

Mousehole are returning to the scene of their FA Vase tie in the Qualifying Round six weeks ago, when an early Andy Elcock goal and an outstanding defensive performance late in the game, including from stand-in goalkeeper Jimmy Weeks, saw them claim an impressive and historic win.

Since then, The Mallet have lost five of their last six games, and without doubt will be looking to make amends for that Vase defeat and also halt their mediocre run.

This will be Mousehole’s 12th Western League game since promotion – after today they will have completed one-third of the season’s fixtures.  Currently they have five wins, one draw and four defeats, and stand three points behind Shepton with three games in hand.

The pitch surface is very wet but has plenty of lush grass.

THE MATCH AS IT HAPPENED

6 minutes:  GOAL FOR MOUSEHOLE.  They’ve done it again – another early goal!  Callam Mconie puts a dangerous low cross from the right into the area, the defence is wrong-footed, CONNOR LEAK- BLUNT collects the loose ball and shows great composure to move it inside on to his left foot and score with a low drive from 8 yards.  The son of the former manager looks pretty pleased to get his first goal for Mousehole since joining in early September.

8 minutes: GOAL FOR SHEPTON MALLET.  The quickest possible response by the hosts.  A low cross comes in from the left, it’s half cleared in front of goal and FIN HAINES clips the ball into the net from 10 yards.  Shepton Mallet 1-1 Mousehole.

20 minutes gone:  The home side have caused a few problems for the Mousehole defence, with Tyrone Tucker-Dixon on the right having some good runs and putting in threatening crosses.  Three chances in quick succession have come and gone, the closest being a cross-shot by Fin Wilkinson that rebounds off the far post before being cleared to safety.

25 minutes:  Mousehole hit back, Hayden Turner’s pace down the left putting the hosts’ back line under pressure

26 minutes:  GOAL FOR SHEPTON MALLET.  After Mousehole lose possession upfield, Jacob Sloggett instantly feeds Tucker-Dixon for a sprint and a cross to the near post where  JACK FILLINGHAM gets ahead of everyone to head home and give his side a 2-1 lead.

39 minutes:  The Seagulls continue with their passing game and a brilliant three-man surge from the halfway line ends with Hayden Turner placing a curling shot millimetres over the far angle of post and crossbar, with keeper Tom Easterbrook a hopeful onlooker

42 minutes:  Seagulls’ captain Billy Curtis joins an attack and his shot from inside the area is blocked

45+1 minutes: Tyrone Tucker-Dixon continues to be a threat – he comes inside from the right with a curling shot that smacks against the woodwork.  Jacob Sloggett has a great chance to give The Mallet a 3-1 interval lead but can’t convert the rebound.

45+4 minutes:  At half time it’s 2-1 to Shepton Mallet.  They could, and perhaps should, be further ahead, but it’s now up to Mousehole to do something about the slender deficit.

47 minutes:  GOAL FOR MOUSEHOLE.  Another quick one – and a much-needed equaliser. The second half has barely got going as Paulo Sousa makes a promising run deep into Shepton territory and slips MARK GOLDSWORTHY through for a one-on-one against the keeper and a low finish for 2-2, with the home defence looking in vain for an offside flag.

51 minutes:  The home side come close to regaining the lead – Ollie Chenoweth punches out a floated free kick and Fin Haines volleys the ball back from 30 yards, but the woodwork saves the visitors for the third time in the match

63 minutes:  Tallan Mitchell forces the home keeper to push out a drive from distance, but there’s no team-mate to exploit the loose ball in front of goal.

68 minutes:  Mousehole are having some good moments.  Callam Mconie bends in a left-footed free kick from 20 yards – it doesn’t have enough power to prevent Easterbrook keeping it out.

71 minutes:  Shepton denied. The ball is scrambled off the line twice and Ollie Chenoweth blocks a close range shot with his boot.

76 minutes:  Mousehole have successfully neutralised the threat from winger Turner-Dixon, who is substituted, but the hosts are starting to dominate proceedings.  Jack Fillingham has space at the corner of the six-yard box but shoots wide.

79 minutes: What a dramatic moment!  Penalty for Shepton Mallet.  A shot is driven towards goal and diverted away by a ruck of players.  Hand-ball is the referee’s verdict, despite big protests by the visitors.  Fillingham steps up and hammers a low spot kick towards the corner, but Ollie Chenoweth gets down very quickly to push the ball on to the post and then collect the rebound.  Magnificent agility.

81 minutes: The Seagulls’ keeper makes another superb save, keeping out captain Andy Martin’s fiercely driven free kick from the edge of the ‘D’.

Inside the last 10 minutes:  Shepton Mallet are on top and scenting victory.  Mousehole need to keep the ball better – it keeps coming back!

82 minutes:  Mousehole substitute – Mark Goldsworthy is replaced by 16-year old winger Jack Symons, who goes out to the left with Hayden Turner moving into the middle

85 minutes: Very good chance at the near post as Shepton’s Joe Morgan races down the right and sends the ball across – substitute Nathan Legge looks certain to score but Ollie Chenoweth makes yet another important save.  The home side must be getting fed up with Mousehole’s goalkeeping displays!

87 minutes:  Mousehole get into a good position in the opposition half for the first time in ages, gaining a free kick right on the penalty area line.  Hayden Turner touches the ball to Callam Mconie but he’s crowded out and shoots hurriedly wide.

89 minutes:  Joe Morgan fires in an angled cross shot which whistles past the Mousehole goal.

90 minutes:  The home side continue to be on the front foot, and it doesn’t look as though The Seagulls have the strength to exploit the space behind their high line.

An entertaining and competitive game.

For Shepton Mallet,  probably hugely frustrating – they will wonder why and how they didn’t win, but at least they improved on recent results.

For Mousehole, a good away point in tough circumstances, which keeps them tucked in the mid-table pack but, with the experience gained so far, good prospects ahead.